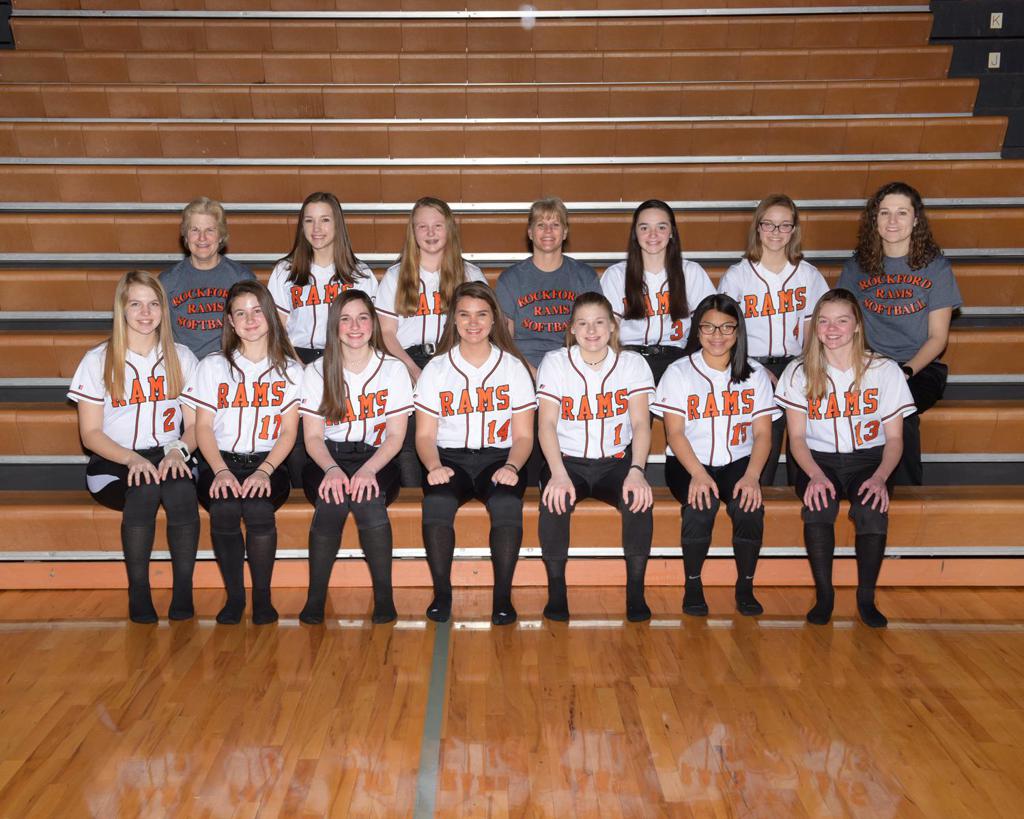 ROCKFORD – It’s been a battle for the Rams freshman softball team to get their games in this season. Rough weather with plenty of cold, rain, and wind has postponed plenty of their games on the diamond. Finally, on Friday, May 3, the Rams were able to put a double header in the books against Kent City. Better yet, the Rams claimed both games with 9-4 and 13-8 scores to move their season record to 5-2.

In the first game, the Rams were able to bring a 1-1 tie to the bottom of the third when they opened it up by plating three runs, and then in the bottom of the fourth with five more runs. Christina Winter started off the fifth being hit by a pitch and then the Rams netted four singles by Sydney Platek, Rhiannon Magrill, Audrey Wendtland, and Caitlyn Johnson, and throw in a walk by Kylie Timmermans, and Rockford was able to capitalize for a 9-2 lead. Kent City was able to plate two runs in the top of the fifth, but that was all the offense they could muster, and the Rams were able to claim the 9-4 victory.

The Rams went 5-for-18 at the plate, with Johnson pacing the Rams going 2-for-3 and tallying three RBI. Wendtland earned the win in the circle, going three inning and giving up only one run on one hit and one walk, while fanning seven. Trinity Vega came on in relief and threw two innings, giving up three runs on four hits and one walk, while striking out one.

In the second game, the Rams enjoyed a 13-8 victory behind some heavy hitting from the team. The Rams jumped out to a 4-2 lead in the first and piled on an additional five runs through four to lead 9-3, but Kent City made a game of it in the bottom of the fourth plating five runs to whittle the Ram lead to just one run. Rockford answered in the top of the fifth, however, scoring four runs to move the game to 13-8 and earn the victory. Johnson started the fifth inning with a single and with some aggressive base running ended up scoring on a single from Magrill. Another single by Winter had two Rams on when Wendtland hit a sac fly to score Magrill. A walk by Vega set the plate for Timmermans, who hit a double to score two and clinch the 13-8 win for the Rams.

As a team, the Rams were 18-for-33 at the plate, with Timmermans going a perfect 4-for-4 at the plate with a single and two doubles and netting four RBI for the Rams. Johnson also went 4-for-4 with a double. Magrill and Platek also had a big game, both going 3-for-4 and netting two RBI apiece. Wendtland had a triple and an RBI, Kayla VanHorn had a hit that netted two RBI, and Aubree Crane, Winter, and Kayla Vanhorn had a single apiece with Crane tallying an RBI. Vega earned the win for the Rams going three innings and giving up three runs on two hits and one walk, while striking out two. Timmermans came on in relief and went two innings giving up five runs on seven hits with no free rides, while striking out one.

Next up for the Rams is a home double header against Coopersville, Tuesday, May 7. Game time is scheduled for 4:30 p.m.