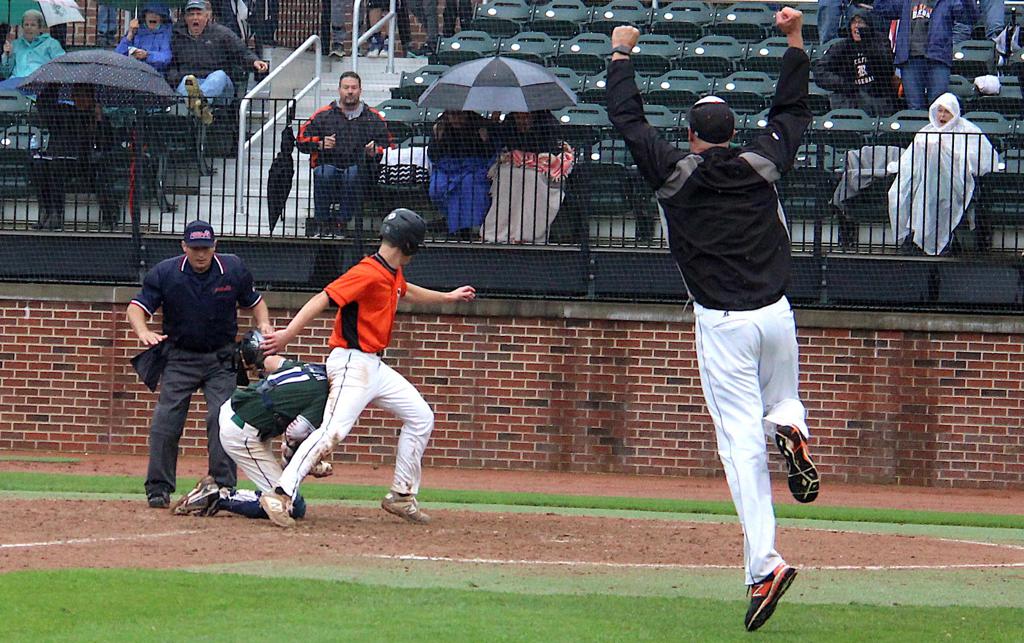 Ram head coach Matt Vriesenga celebrates as Luke McLean scores in the bottom of the 8th inning to give the Rams the 3-2 victory in the MHSAA State Semi-finals. ~ Photo by Jeannie Gregory

LANSING – The Rams varsity baseball team was nearly flawless in the MHSAA D1 Baseball State Semis, Thursday, June 13. Under a constant rain, the Rams carved out a game that featured impressive pitching, text book bunts, timely hits, expert field play and aggressive baserunning at McLane Stadium, on the campus of Michigan State University. But, then again, when you are playing as one of the final four teams in the state in the playoffs, you better deliver. And the Rams did, with the third extra-inning win in their playoff run. The Rams earned a 3-2, 8-inning, heart-stopping victory over Macomb Dakota to earn the honor of playing for the State Crown on Saturday.

The Rams saw stellar play from plenty of the team on their way to the victory, including a clutch throw from their catcher Cody Sterkenburg to first for an out that if they didn’t get could have possibly buried them. Not to mention, Ram hurlers Zach Marshall and Luke McLean facing more pressure on the mound than any young man should have to maneuver through. Both held their heads up, worked their way through some tough situations and gave their team’s batters the opportunity to claim the game. Caleb Englesman and Zach Schamp moved a Ram runner into scoring position to set the stage for a 1-run lead. Not to mention Isaac Toole hustling down to first base to set up a score. And, hats off to McLean, Jack Richardson and Brendan Schueller for making things happen on the base paths for the Rams with aggressive, and more importantly, smart, baserunning. Alex Miller hit a clutch single with two outs late in the game to plate a Ram run to tie the game and give the Rams a chance to move on. Do you see a pattern here? They all came together in a pressure-packed game.

It took the Rams until the bottom of the third to plate a run against tough Macomb Dakota pitching. Zach Marshall started off the inning with a single to center field and Richardson came into the game to run for him. Caleb Englesman and Zach Schamp had grounders that moved Richardson to third. Joe Kelley walked to put another Ram on, and then Sterkenburg slammed a single to left field to plate Richardson and give the Rams the 1-0 lead.

The game stayed that way until the top of the sixth when Macomb Dakota waged an offensive attack that saw them plate two runs and claim at 2-1 lead. The Rams kept calm, cool and collected and stayed with their game plan and answered in the bottom of the stanza to knot it at 2. With two outs, Isaac Toole got on base and a wild pitch had him moving quickly to second. McLean came in to pinch run for Toole and Miller came up to the plate and smashed the ball to left field on a two out 2-2 pitch that plated McLean and move the score to 2-2.

Macomb Dakota had their chance to score in the top of the seventh, coming as close to home plate as third base. There were two on with a man on third with only one out when a drop third strike gave Ram fans a bit of fear. But, Ram catcher Sterkenburg kept calm and had a perfect throw to first to get the important second out. McLean got a fly out for the third out of the inning to keep the score knotted 2-2.

The Rams have shown all year they like extra inning victories and this game was no different. Sterkenburg kicked off the bottom of the eighth with a line drive single to left field. Schueller came in to pinch run for the Ram catcher and McLean hit a single to center to move Schueller to within scoring range at second. Schueller got out on a fielder’s choice at third and the Rams were looking at more stress with two outs, and McLean now at second. It was then, with two outs, that Owen Carins put the ball in play and a Macomb Dakota error found McLean scoring all the way from second to earn the 3-2 Ram victory.

“We’ve been playing tough games all the way through our whole run in the state tournament,” says Ram head coach Matt Vriesenga after the game. “After we gave up two runs, we looked a bit deflated coming off the field. I assured them we have been in this place before. Then, with two outs, Isaac Toole hustling out a base hit and then moving to second base on a wild pitch was huge and gave us life. Then, Alex Miller being down 0-2 and battling back to 2-2 and getting a huge hit and us scoring you could see the air enter our guys lungs again. From there we knew we had been here before. And then sneaking that run across in the last inning was just amazing.”

The Rams were 6-for-31 at the plate as a team. Sterkenburg paced the Rams going 2-for-4 with two clutch hits and one RBI. Miller had an RBI single, and Schamp, McLean and Marshall tallied a hit apiece. Marshall stared on the mound for the Rams and went six innings giving up only two runs on five hits and two walks, while striking out five. McLean came on in relief, earning the win going two innings and giving up no runs on one hit, while fanning two.

“Alex Miller coming up with a single there in the sixth inning to tie the game was exciting for me, he’s a kid who’s battled all year long. Last year as a junior, he hit about .180, and this year he’s hitting .380, and he came up big in a big situation. That was just a huge lift to our team. These kids never cease to amaze me. They have fought hard all season and I am extremely proud of them.”

The Rams now have a 28-9 overall record on the season. They will face off against Portage Northern in the State Championships. Portage Northern topped Bloomfield Hills Brother Rice 2-0 in the other semi-final. The Finals will take place Saturday, June 15, at 9 a.m. at McLane Stadium, on the MSU campus.

“We are so excited,” says McLean. “We are psyched to play in the State Championship,” 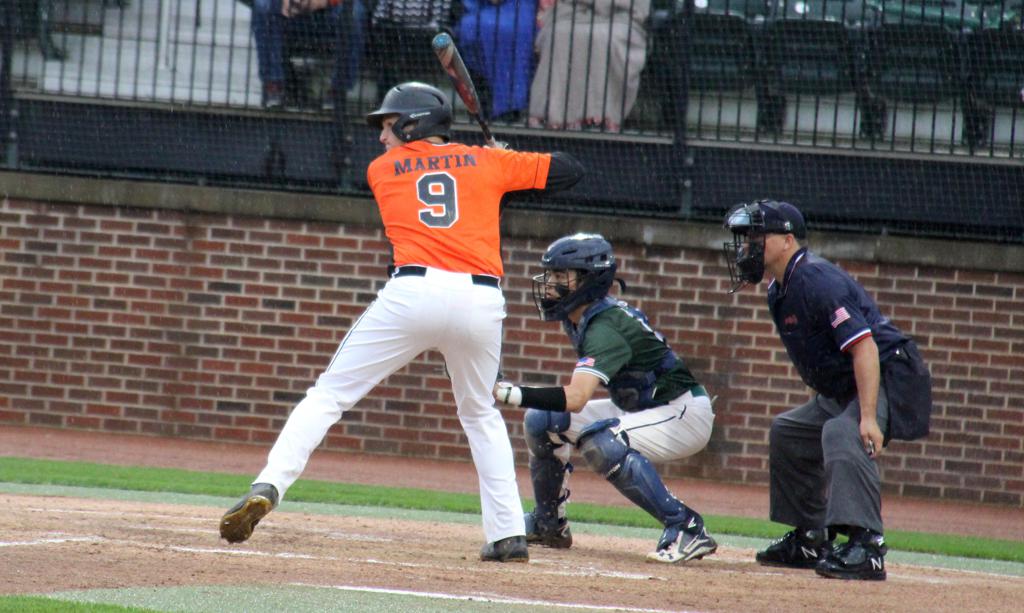 Grant Martin up to bat in the State Semis. ~ Photo by Jeannie Gregory 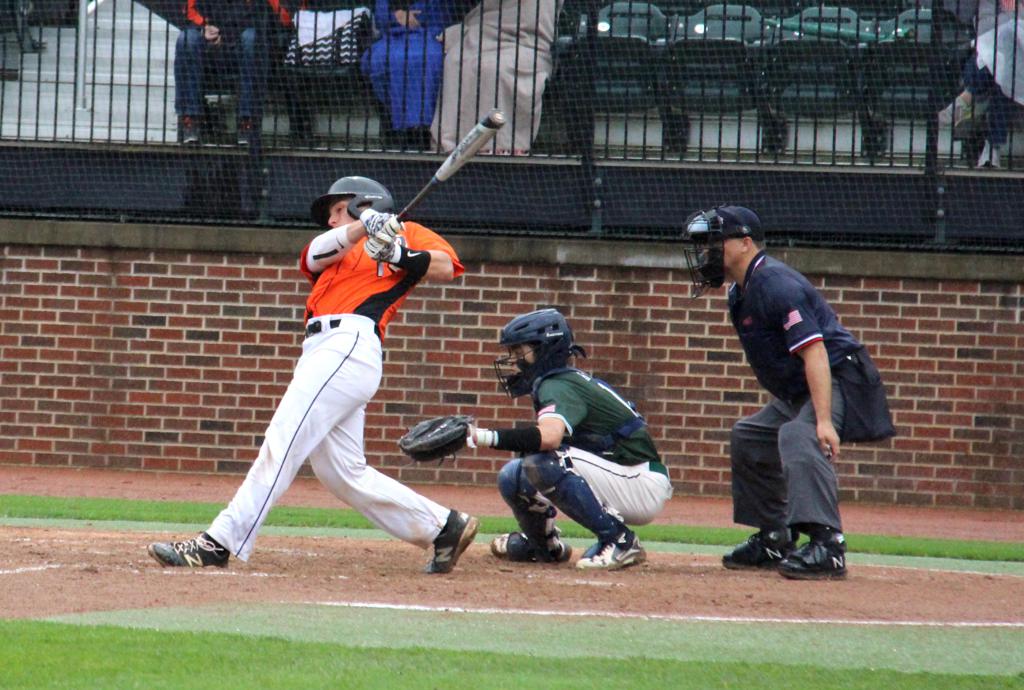 Cody Sterkenburg hits an RBI single to give the Rams the lead. ~ Photo by Jeannie Gregory 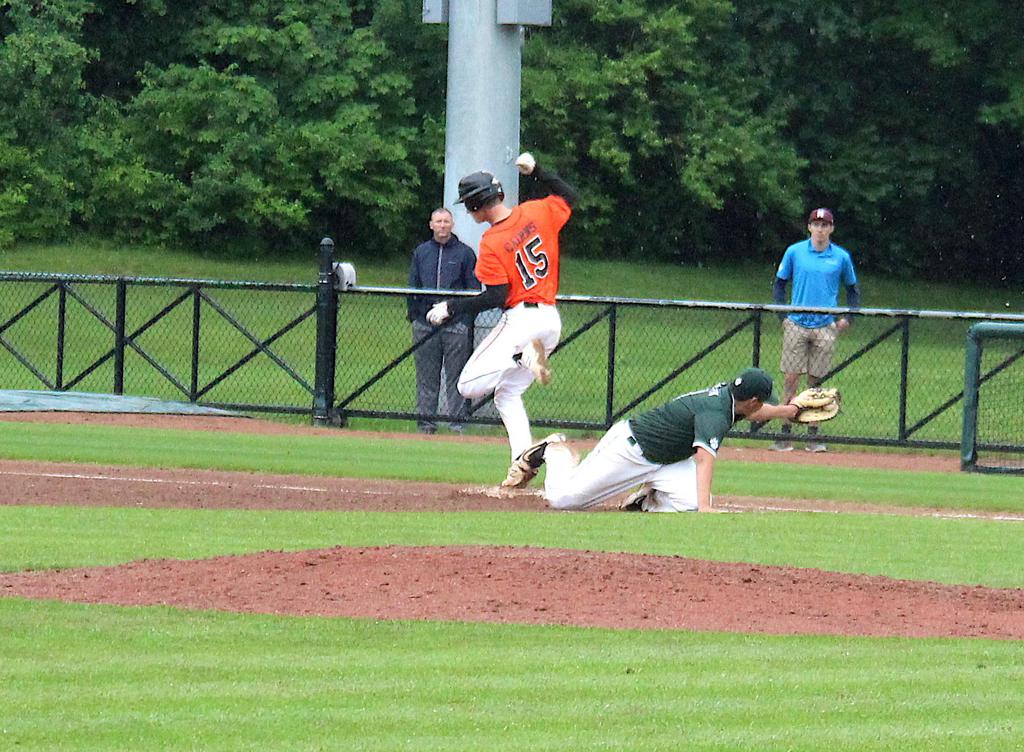 Owen Cairns hustles to first and advances Luke McLean for the victory. ~ Photo by Jeannie Gregory 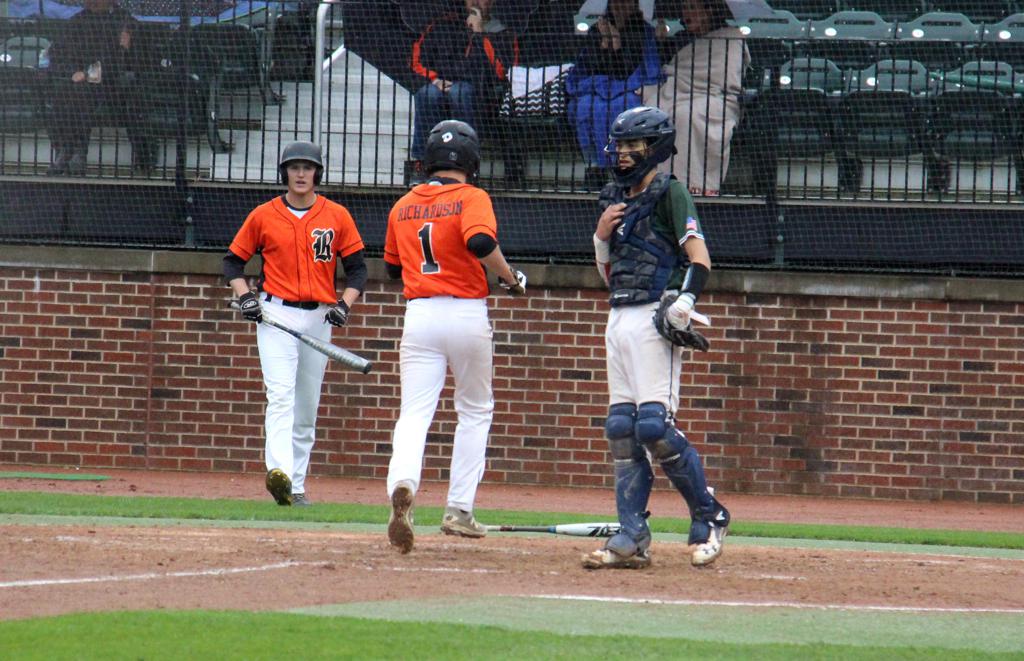 Jack Richardson scores the first run for the Rams. ~ Photo by Jeannie Gregory 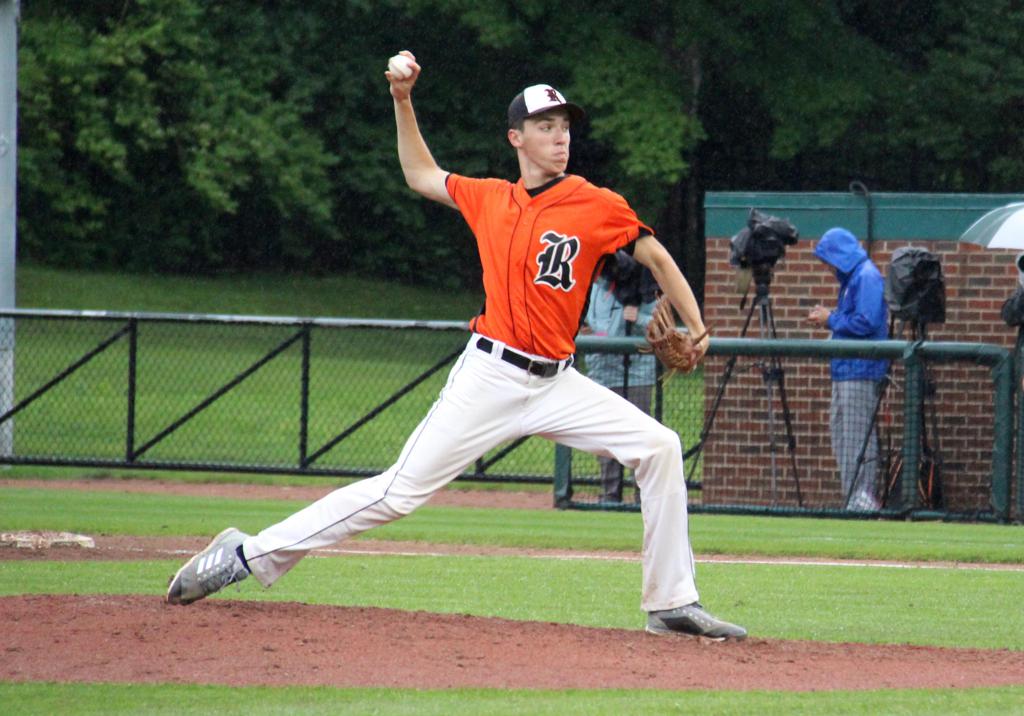 Zach Marshall on the mound for the Rams. ~ Photo by Jeannie Gregory 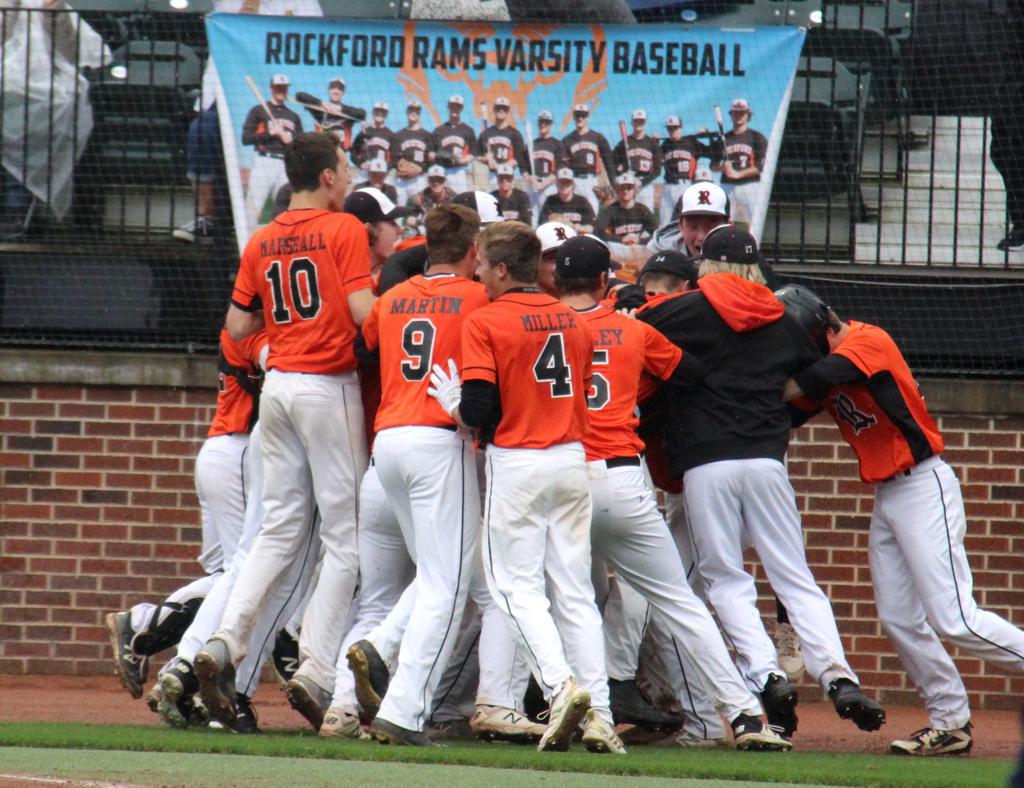 The Rams celebrate their victory and advancing to the MHSAA State Championships. ~ Photo by Jeannie Gregory