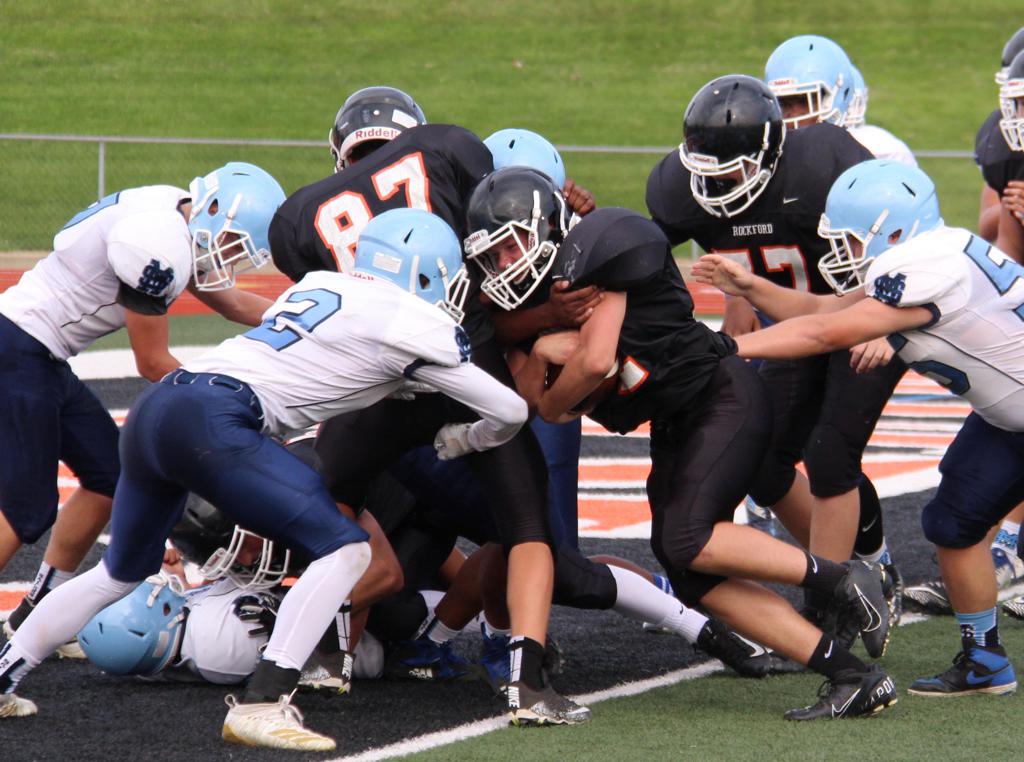 Rick Beison breaks through the Sailors D line to score a touchdown for the Rams. ~ Photo by Jeannie Gregory

ROCKFORD – Things became a little dicey for the RHS freshman football team, Thursday, Sept. 19. The Rams had worked their way to a 21-14 lead when the Mona Shores Sailors turned the tide of the game. The Sailors had just 1:34 left in the first half when they mounted an attack that started on their own 42-yard line. They didn’t need much of that time, as they moved the ball two yards on the second play and then connected on a 56-yard pass that had them still trailing 21-20. The Sailors opted to go for a 2-point conversion and was successful on a rush to claim a 22-21 lead heading into the locker room. The Sailors didn’t realize it at the time, but that would be the last scoring drive they would have. Head coach Tim Saur’s Rams tightened up their defense the entire second half and turned on the jets on offense to score twice to claim the 36-22 victory. The win moves the team’s record to 4-0 on the season.

The Rams started off the game with a bang with linebacker Joseph Pitsch breaking through the Sailors’ O line and sacking their quarterback on the first series. That set the stage for the Rams’ first score. Pitsch also blocked the Sailor's punt, picked up the ball and ran down the field to hit pay dirt with just 1:30 off the clock in the game to move the score to 6-0. The PAT was good and it was 7-0 Rams. The Sailors were looking at second-and-10 at their own 42 when they notched a 58-yard touchdown run to move the score to 7-6. Their PAT was no good to give the Rams the slim 1-point lead. Rockford moved down the field on their next possession with quarterback Mac VandenHout connecting with Colby Weston for a huge gain. The Rams scored with 3:30 left in the first and with Jackson Burkholder’s successful PAT they had a 14-6 lead. That lead didn’t last long as the Sailors utilized a couple of long passes to score at the 1:15 mark to move the score to 14-12. The Sailors went for the 2-point conversion again, only this time they were successful on a pass play that moved the score to 14-14.

The Rams started their drive at the end of the first quarter and finished it successfully in the second. They were looking at third-and-three at their own 32 when VandenHout connected with Noah Lepzinski for a 15-yard pass play that landed them at the 47. Another pass play to Rick Beison had the Sailors rocked back on their heels, having to chase Beison and pulling him down at the 4-yard line. Beison had the honors of running the ball in from the 1-yard line and the Rams had the lead at 21-14 after the successful PAT. The Sailors followed with the score described in the first paragraph to close out the half.

The second half showed plenty of adjustments to the Rockford defense, with the Rams stifling any Sailor drives. On offense, Rockford opened the third quarter with a scoring drive with a 28-yard pass to Jonny Rohen-Blanton. That set up a rush from Lepzinski that looked like it wasn’t going anywhere when he popped up out of the middle of a mass of Sailors to run all the way to the end zone to net 33 yards. A successful pass from VandenHout to Weston for two points saw the Rams recapture the game by a 29-22 score. On the next series, Mona Shores was looking at a fourth-and-one at the Ram 44 when the Rams defense came up with a huge stop, actually pushing the Sailors back three yards. Rockford followed it with the final score of the game starting at the 47. Lepzinski ran for 44 yards to move the Rams to the four-yard line. Beison carried the ball the next two plays to break into the end zone and give the Rams the 35-22 lead. The PAT off of Burkholder’s foot gave Rockford a comfortable 36-22 lead and turned out to be the final scoring play of the game.

The Rams travel next Thursday, Sept. 26, to Grand Haven to take on the Bucs. Kickoff is at approximately 6:30 p.m. 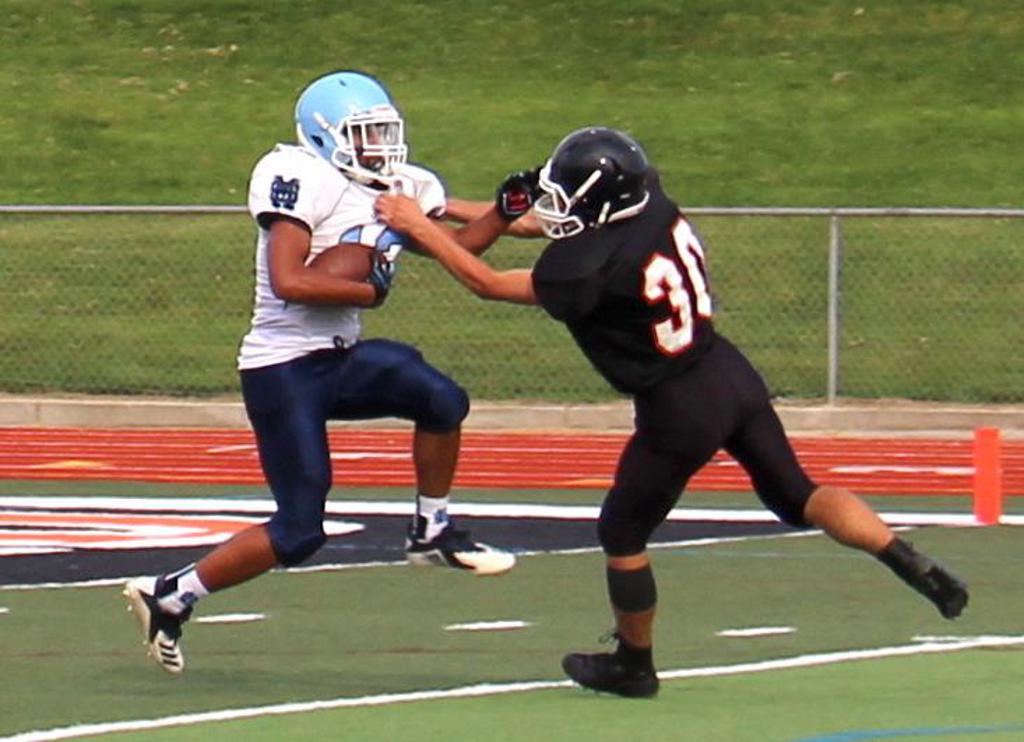 Rams back Logan Bates chases down a Sailor. ~ Photo by Jeannie Gregory 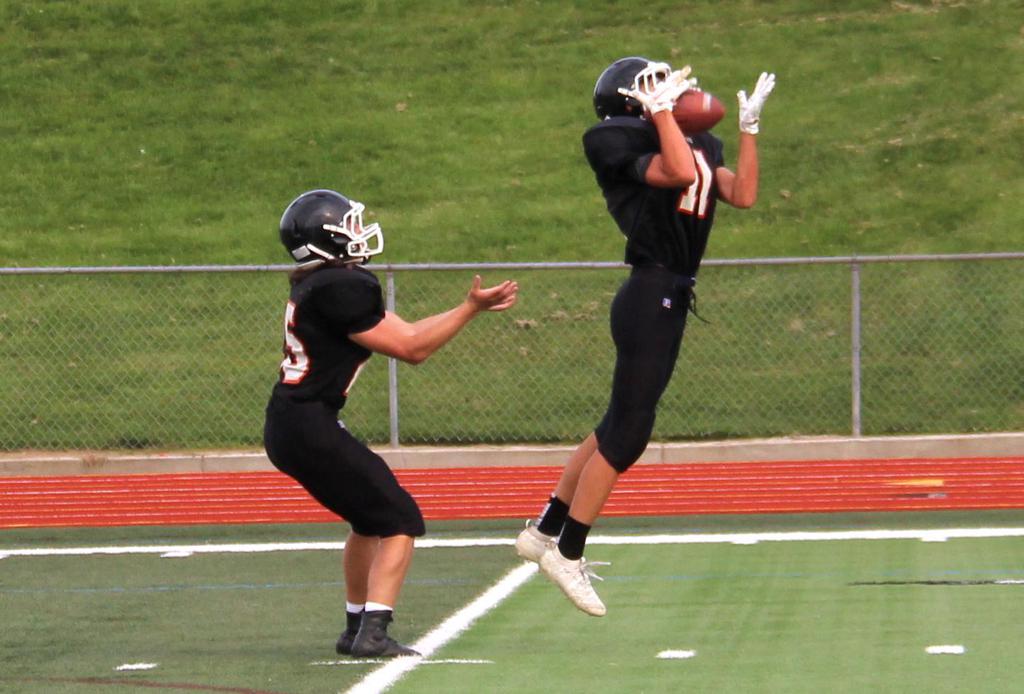 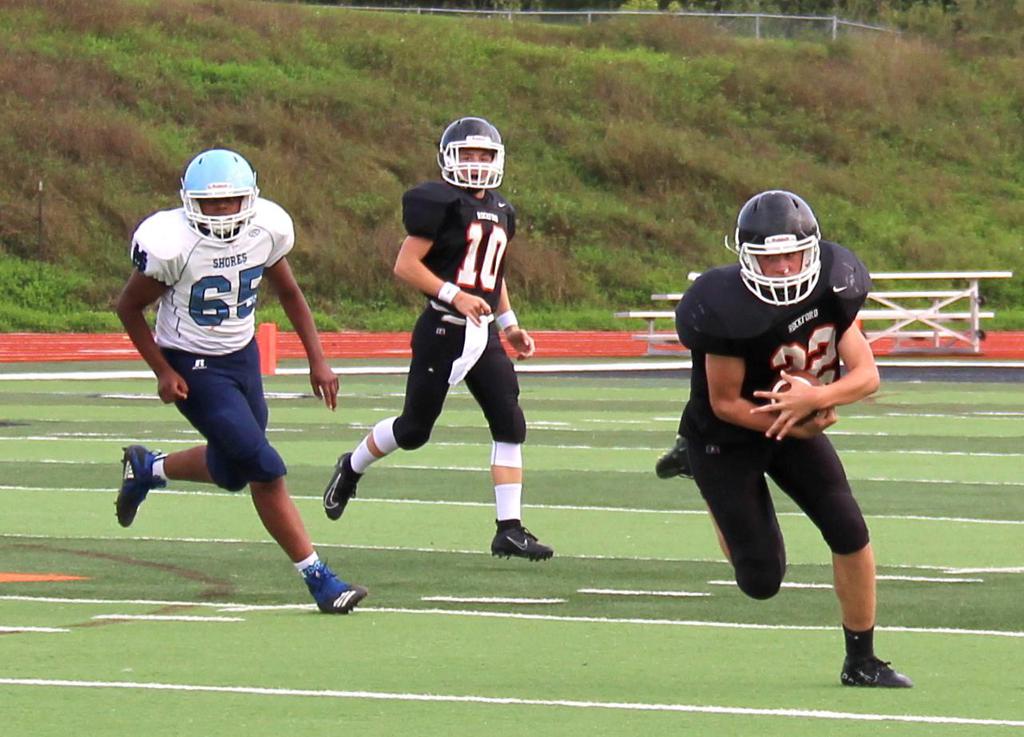 Rick Beison breaks away for another long carry. ~ Photo by Jeannie Gregory 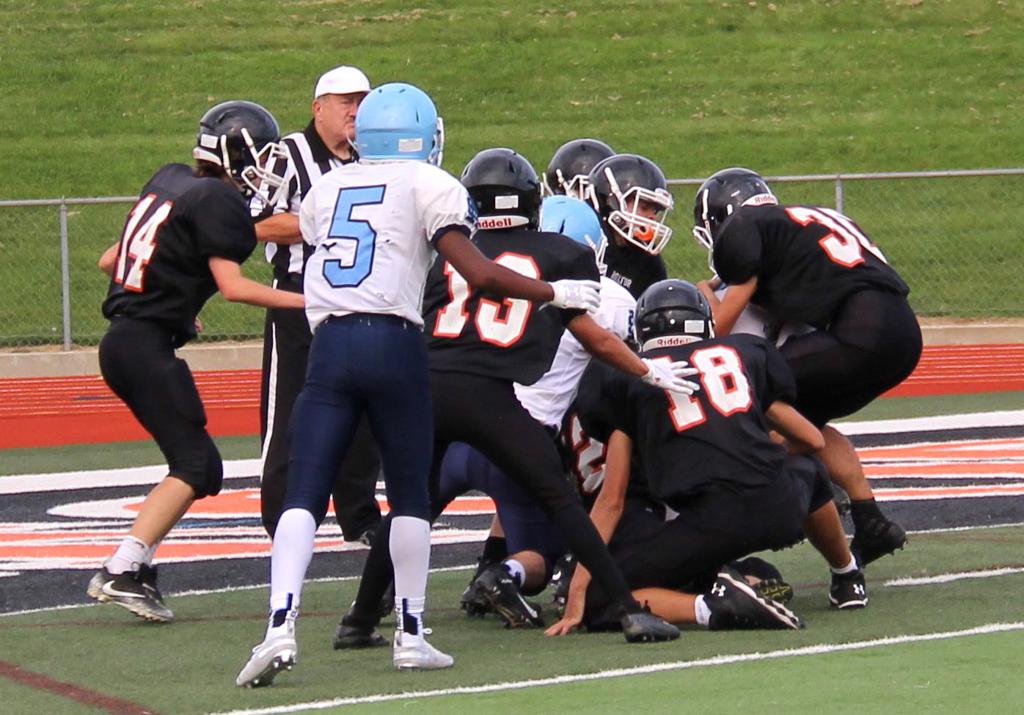 Rams special teams downs a Sailor at the 5-yard line on a kick off. ~ Photo by Jeannie Gregory 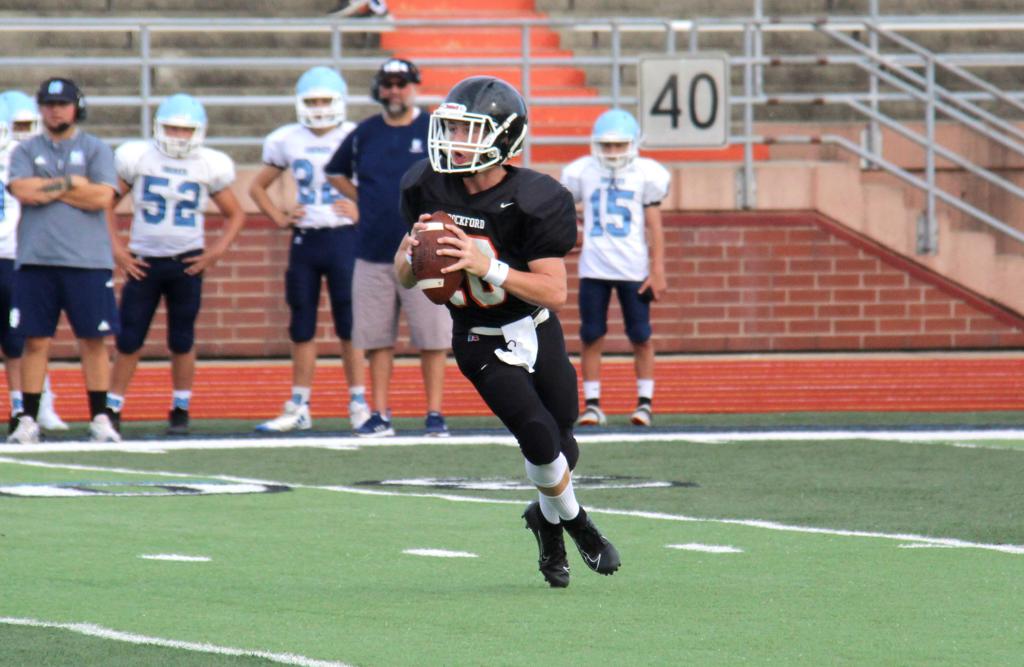 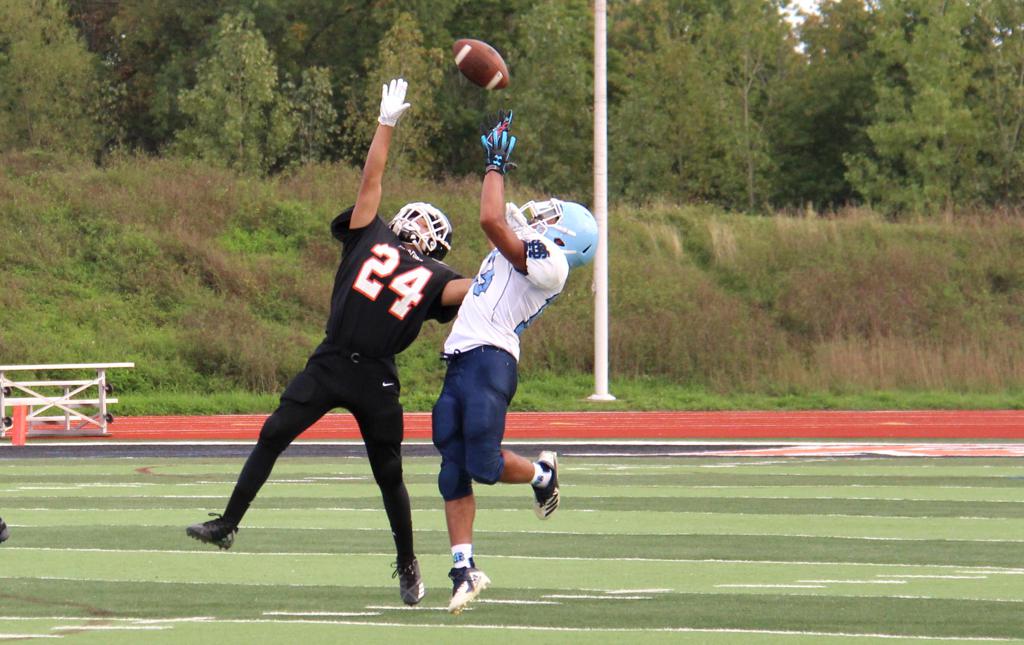 MORE PHOTOS MAY BE FOUND HERE.