Rams Rule Over Sailors in Huge Win on Gridiron 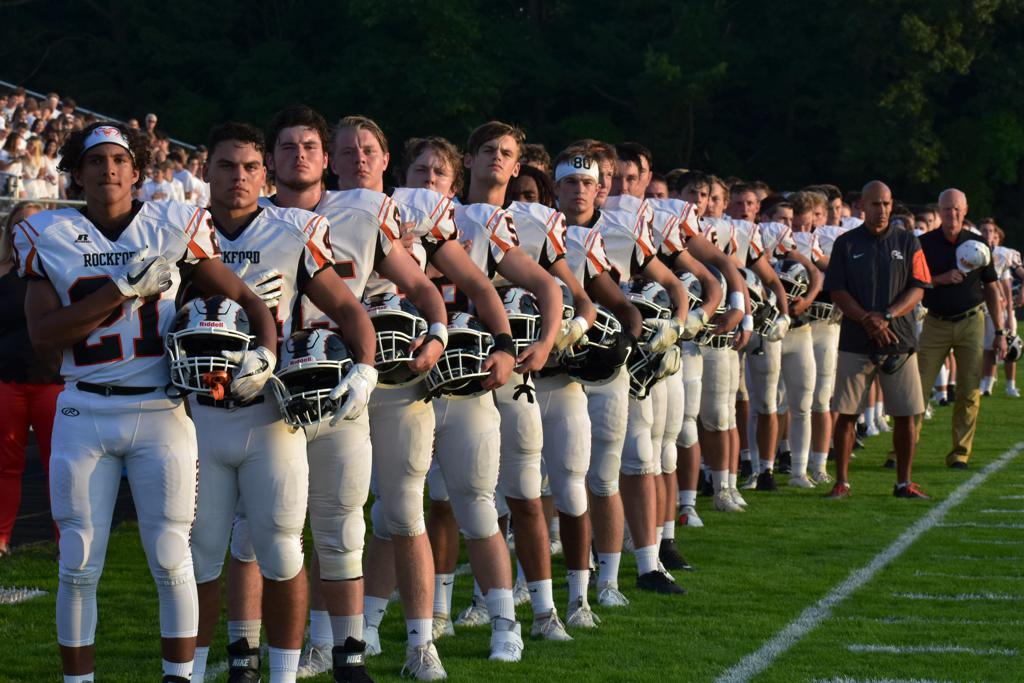 The Rams varsity football team line up for the National Anthem prior to their Friday night contest against Mona Shores. ~ Photo by Connie Hill

NORTON SHORES - Rockford made the lengthy trek to Muskegon to take on Mona Shores in a battle involving a pair of squads ranked in the top three of their respective classes in the state of Michigan on Friday, Sept. 20. Mona Shores was the No. 1 ranked team in Division 2 while Rockford sat in the third spot of the Division 1 rankings. When the dust had settled on the exciting contest, it was the visiting Rams who emerged victorious by a score of 34-21.

The offensive stalwart for Rockford was their bruising 240-pound senior fullback Jaiden Friesen. Friesen scored all five Rockford touchdowns on the ground in a smorgasbord of ways. There was a standard four-yard burst on Rockford's opening possession. Then came a 51-yard bolt of lightning on a trap play on the last offensive play of the opening half to knot things up at 14-14, a typical seven-yard slog up the middle to give Rockford a 20-14 lead in the third quarter, a one-yard plunge to extend the lead to 27-14 in the final quarter and finally, the icing on the cake, a 37-yard jaunt that capped the evening’s scoring with only 25 seconds to play to seal the impressive win for the Rams.

"Jaiden is getting everything he deserves," said Rockford defensive coordinator Randy VanderVeen. "He is a tough kid who has put in all of the time and hard work that has enabled him to be successful. He is also the first one to credit all of his efforts of his offensive linemen. I also want to extend kudos to everyone on offense tonight, as well. I told our kids good things were going to happen tonight if they gave great effort and it was the team that delivered in every area. That was a great team we played tonight, and credit goes to everyone for what we accomplished."

The other highlight of the evening for Rockford was the return to the sidelines of head coach Ralph Munger. Munger was forced to the press box for the first three games of the season while recuperating from a quadruple bypass August 9. Having received clearance from his medical professionals, he was back to where he has patrolled the sidelines for the Rams since 1992. Munger opted not to address the press after the game and deferred all questions to VanderVeen.

"This was a great win for Ralph," said Vanderveen. "We were so happy that we got to let him feel what we have been feeling for the first three weeks of the season. Ralph has orchestrated this entire program and I am just fortunate to be able to do my little part. It is a huge credit to Ralph that the cohesion and success we have enjoyed over the first several weeks of the season is because of the system he has developed here at Rockford."

Rockford drove the field on the opening possession to take a 7-0 lead. The drive covered 77 yards in 15 plays, before Friesen scored the game's initial points. Teagen Lenderink made the first of his four successful conversions and it was a 7-0 Ram lead with 4:35 left in the opening quarter. But the Sailors quickly responded on their opening salvo to knot things up at 7-7 after the first quarter. Mona Shores then took the lead late in the second quarter on a 19-yard run to make it a 14-7 game with 3:56 left.

That set the stage for the first big turning point of the game in the closing seconds of the first half. Senior defensive back Nick McCauley made the first big play when he stuffed a Sailor ball carrier on a fourth down play to give Rockford the ball at Sailor 47 with less than 30 seconds to play. After a delay of game penalty, a  scramble for a yard by junior quarterback Chris Corey and an incompletion the Rams were facing third and 14 at their own 49. Friesen then took a trap handoff directly up the gut before veering left and outracing the entire Sailor secondary into the end zone with only two seconds showing on the clock. That set off a delirious celebration among the Ram players, coaches and fans as the PAT knotted things up at 14-14 as the teams headed to the locker room.

"I was thinking of a play we ran against Muskegon several years ago that Ralph called and helped change the complexion of that game too," said Rockford offensive coordinator Steve Dengler. "We were struggling to get anything going at that point and Ralph called that play so I was just thinking maybe we can hit it again this time. It was a 40-trap and it was executed to perfection by everyone and Jaiden (Friesen) showed that he has some quickness as part of his game too."

Rockford again marched the length of the field on their opening possession to take a 20-14 lead with only 1:25 left in the third quarter. They then proceeded to expand the lead shortly thereafter when the first of several mistakes from the Sailors really got momentum turned Rockford's way. Senior defensive lineman Ian Brofft pounced on a Sailor fumble to give the Rams a golden chance to extend the lead to two scores. It seemed as if those hopes went awry when a 31-yard field goal attempt sailed just wide. But it was negated when the second Sailor mistake gave the Rams another chance following a running into the kicker penalty. Friesen did the honors three plays later and it was a 27-14 Rockford lead with only 8:52 left to play.

After stuffing the Sailors the Rams ate up a large chunk of the clock before a Mona score with only 1:22 made it 27-21 and helped unsettle the loud Ram contingent in attendance. But the ensuing onside kick sailed out of bounds and Friesen's last score on a fourth and inches play made it 34-21 with only 25 seconds to play.

"That late touchdown in the first half really helped turn the tide for us." said VanderVeen. "It was like someone took an air pump and just inflated the entire team. But it was also typical to show the kids that when things don't go your way you just need to buckle down and make a play. And we were fortunate enough to do that. Just a great win over an excellent team."

One of the most glaring team statistics from the game was the fact that Rockford possessed the ball for 32:39 while Mona Shores had it for only 15:21. Despite the difference the final total yardage stats were Rockford with 295 yards and Mona Shores with 267. That was a perfect illustration of what the Rams hoped to accomplish coming into the game of keeping the ball away from the explosive Sailor offensive while grinding out yardage and burning the clock. Mission accomplished in resounding fashion.

Friesen led the Ram ground attack with a sterling 208 yards on 31 carries to go along with the five touchdowns. Junior running back Ethan Nash accounted for 26 yards on seven carries and fellow junior back Luke McLean made his initial foray onto the offensive side of the ball for the Rams by accruing 18 yards on five attempts. As a team the rushing attack netted 282 of the 295 total team offense.

Junior quarterback Chris Corey wasn't asked to do much passing the ball and finished the night one for six for 13 yards. Junior tight end Brock Holwerda reeled in that single reception for 13 yards.

It was another slow night for the defense in running up big stats on that side of the ball. When you are only on the field for just over a quarter of the game tackles are not easy to come by and it showed for the second straight week. Junior linebacker Ben Tadych, senior safety Jay Smith and senior linebacker Reid Nicholson all had five tackles for the evening. Junior linebacker Cole Gleason chipped in with four as well. In addition to his big fourth down stop in the first half, McCauley added a late interception to his solid contributions in the big Ram victory.

The win moved Rockford's record to a perfect 4-0 on the season for the first time since 2014. Mona Shores falls to 3-1 with the loss. The Rams will finally return home next week when they host Grand Haven in the annual Homecoming tilt. It will be the first of five successive OK Red games for the Rams with three of them at home. Kickoff is slated for 7 p.m., Friday, Sept. 27. 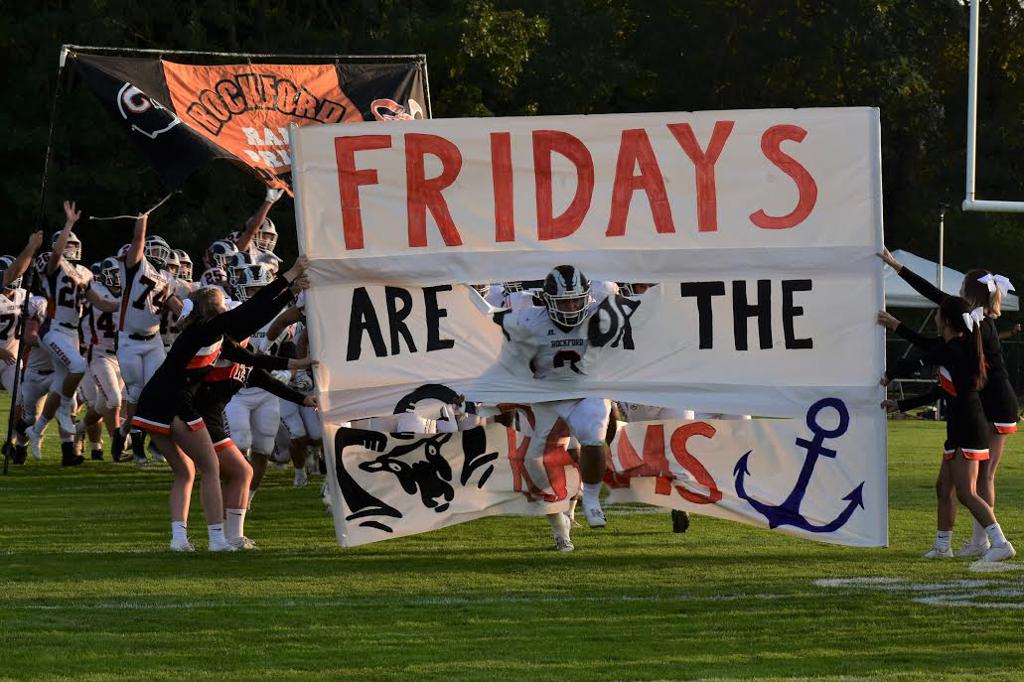 "Fridays are for the Rams!" ~ Photo by Connie Hill 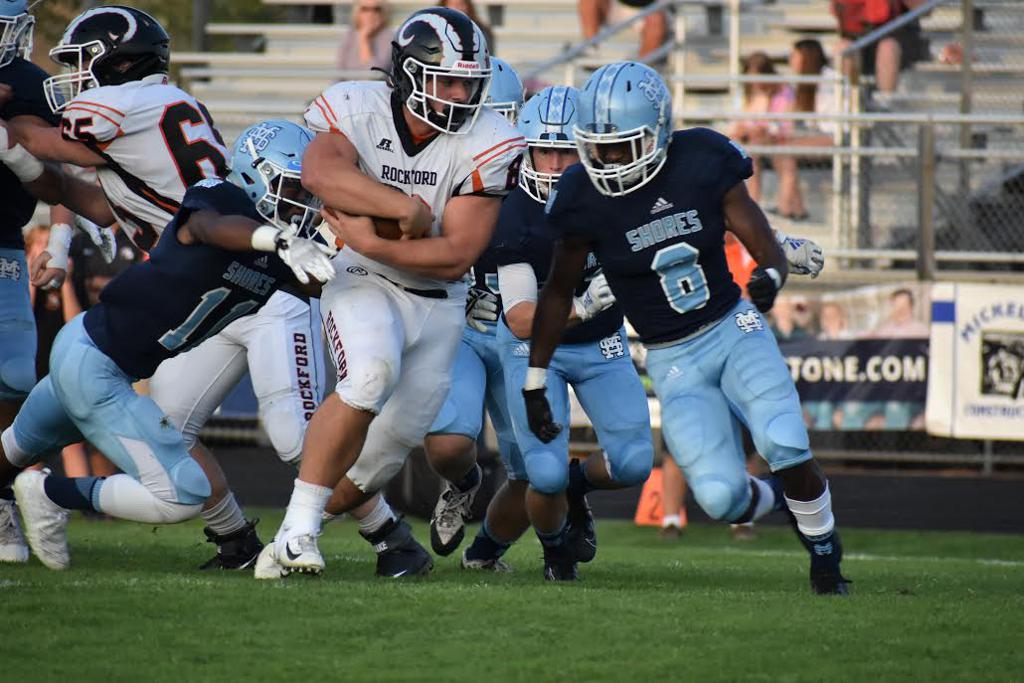 Jaiden Friesen works through the line as Ram Fans chant, "You can't stop him!" ~ Photo by Connie Hill 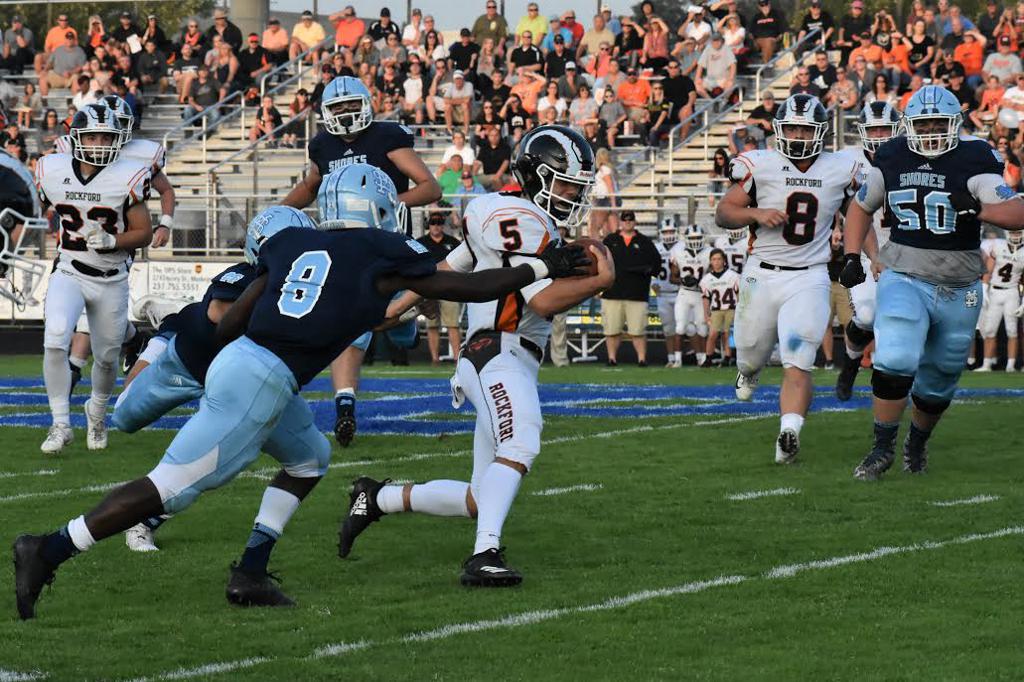 Chris Corey on a QB keeper. ~ Photo by Connie Hill 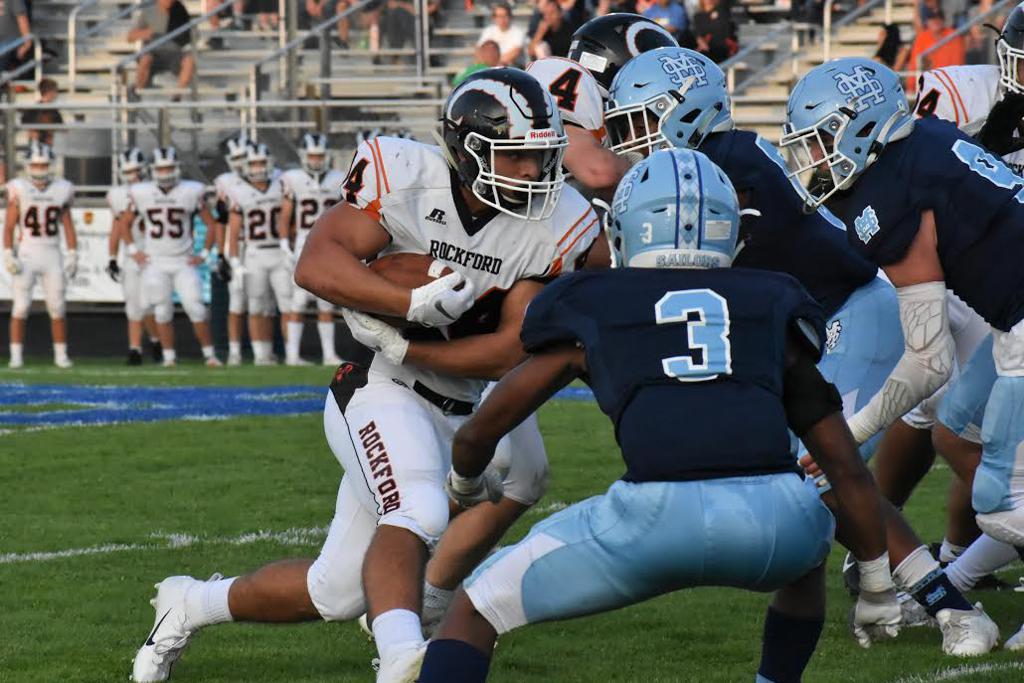 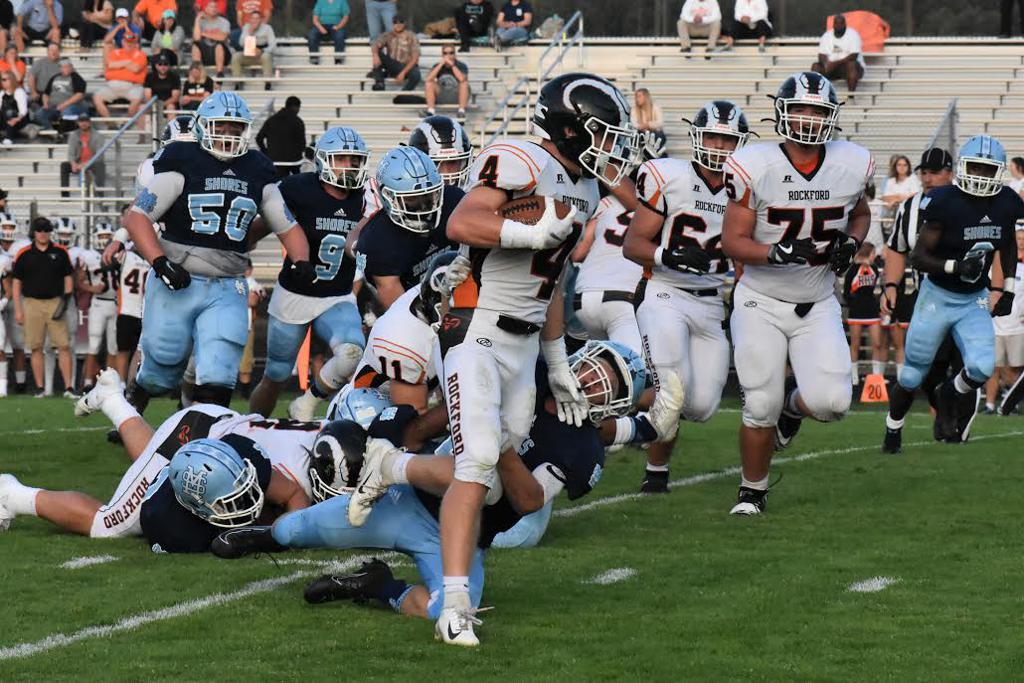 Luke McLean works to pull away from a Sailor’s grasp. ~ Photo by Connie Hill 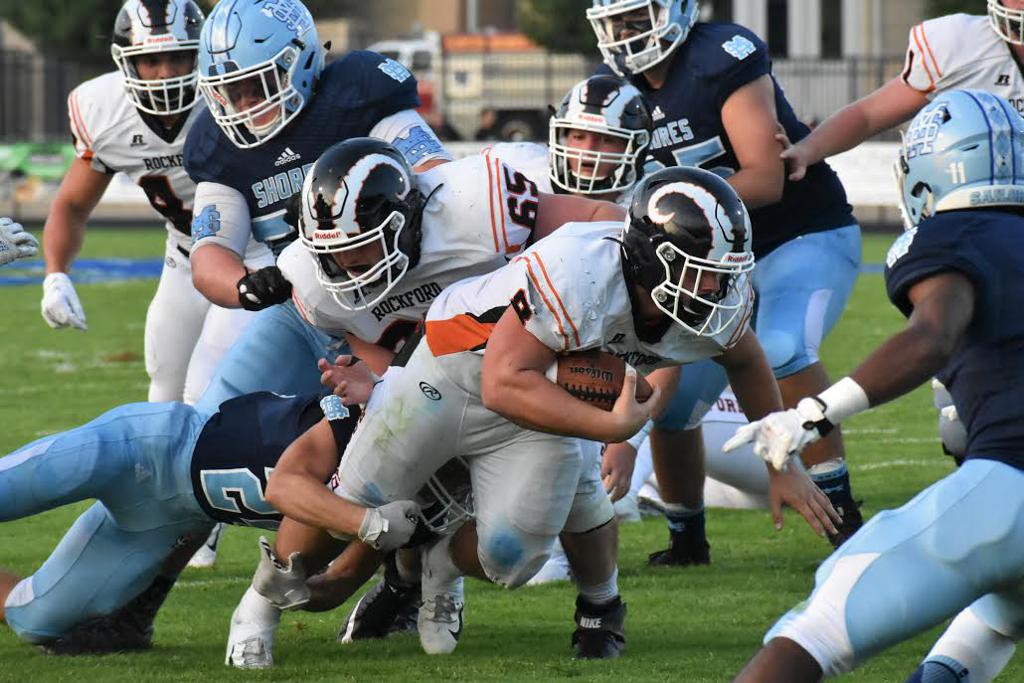 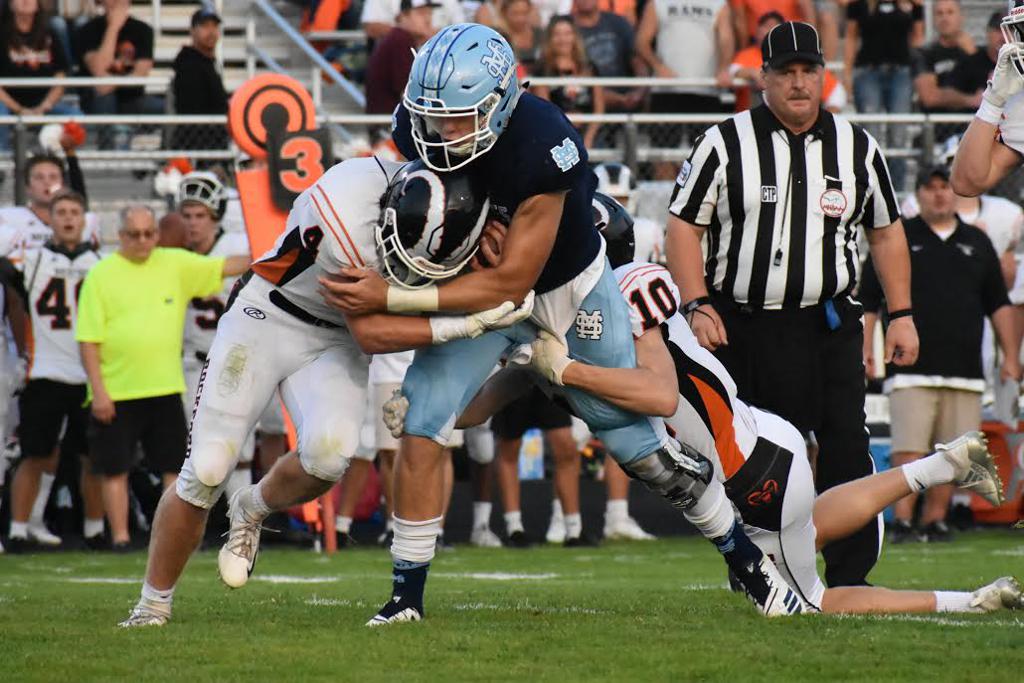 No. 4 Luke McLean and No. 10 Andrew Lanham bring down a Mona Shores ball carrier. ~ Photo by Connie Hill 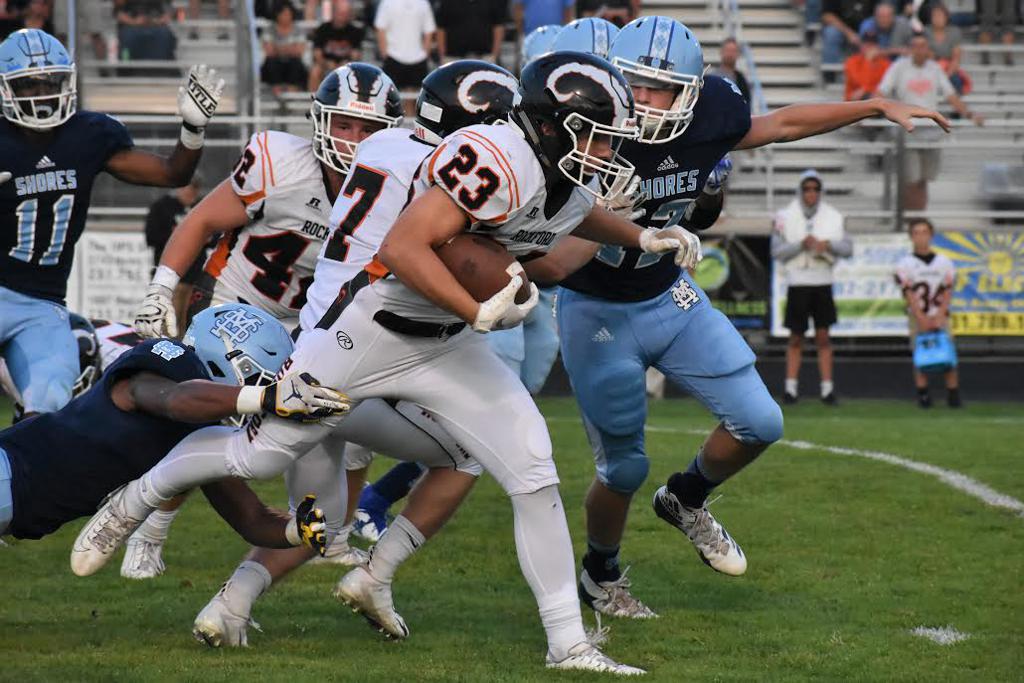 Ethan Nash carries the ball down the field. ~ Photo by Connie Hill 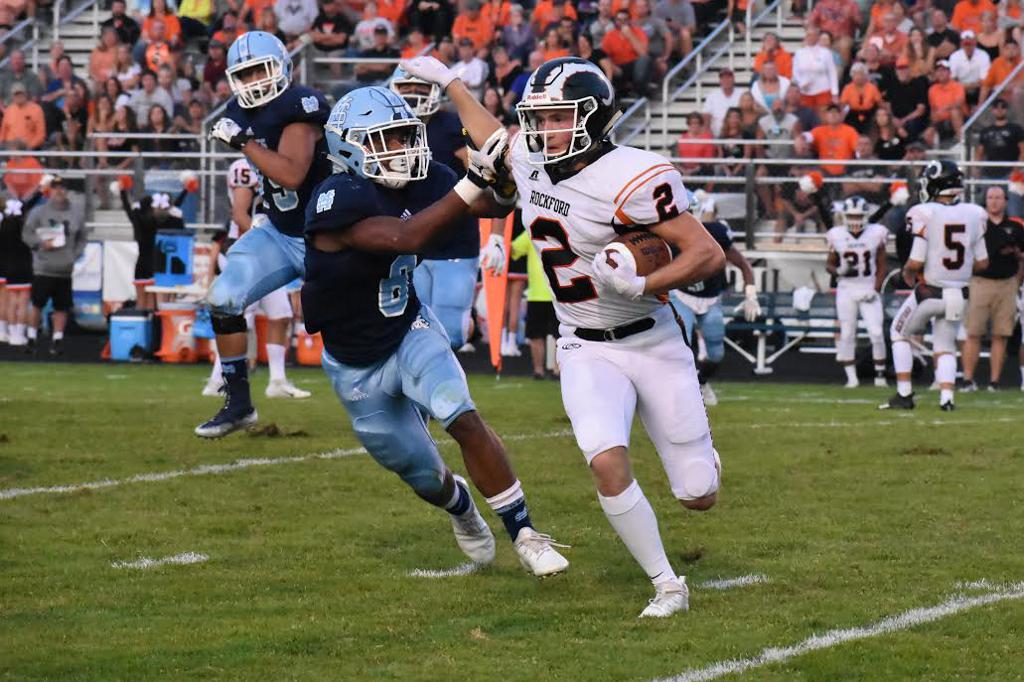 Bradley Rohen-Blanton works to get some room away from a Sailor. ~ Photo by Connie Hill 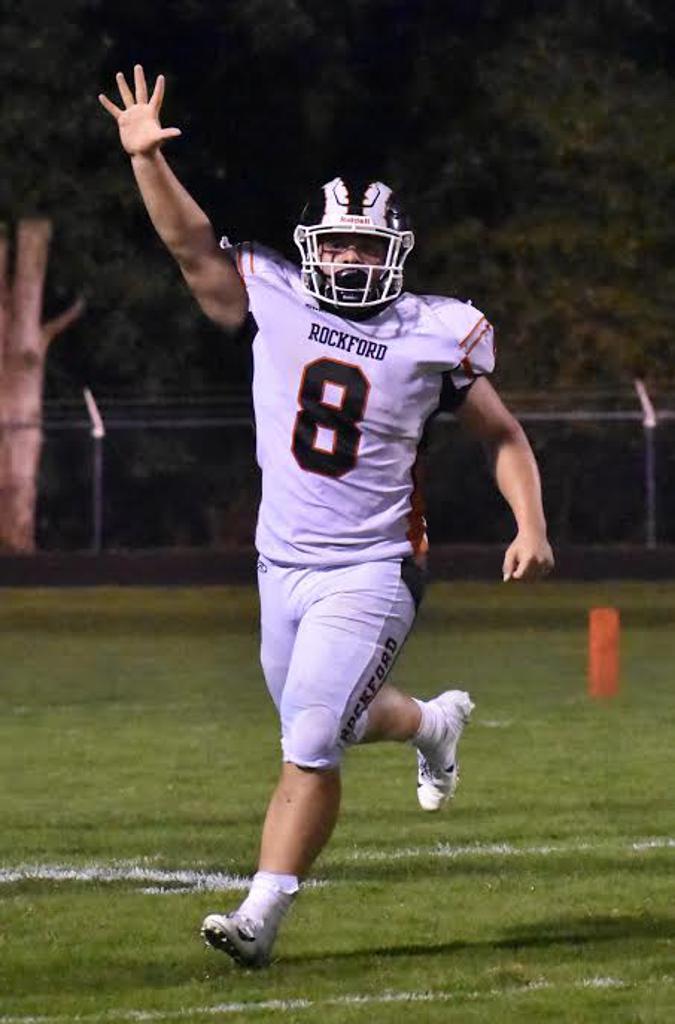 Jaiden Friesen celebrates his 5th touchdown against the Sailors. ~ Photo by Connie Hill