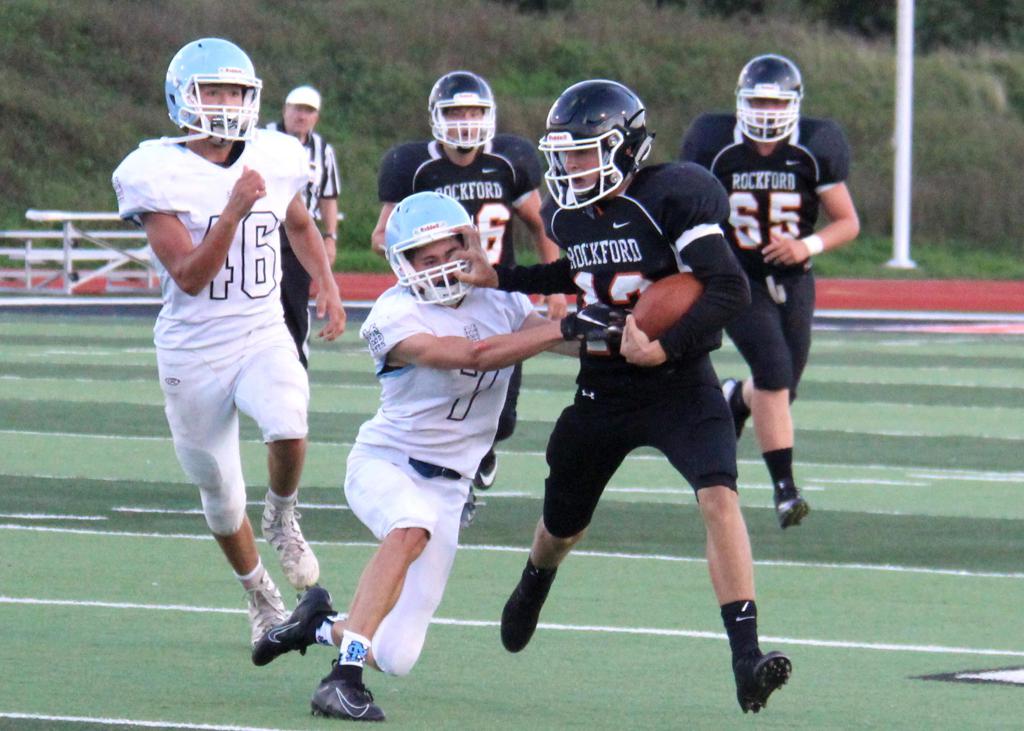 ROCKFORD – The Rams JV football team played host to the Sailors of Mona Shores in a game that played out in front of the crowd at The Ted. Rockford earned a 14-0 victory to move their record to 14-0.

A true battle of defenses, there were only two scores the entire game and both of those occurred in the first quarter. Luckily for the Rams and coach Brian Richardson, both of them were for Rockford. The first time the Rams found the end zone was when quarterback Zak Ahern connected for a 25-yard pass play with receiver Sam Watts. The Dolan Harmsen PAT was good and the Rams claimed the 7-0 lead. The second score of the first quarter was set up by an impressive return from Cam Whyte to set up the Rams on the Mona Shores’ side of the field. A counter play to Gabe Spees found the Rams in the end zone for the second time of the game. Harmsen split the uprights again to move the score to 14-0.

The Sailors did cross the goal line in the second quarter, but a flag took away the score. The Sailors connected on a long pass play that had them looking at a first-and-goal at the Ram 3-yard line.  On the next play, the Sailors entered the end zone, but a Sailor penalty had plenty of laundry flying from the refs and it was called back and the Sailors were looking at a first-and-11 instead of six points on the board. The Rams had a huge defensive stand to keep them from scoring. On a second-and goal at the three Whyte and Caden Hyink combined to shut down the Sailors ball carrier at the line of scrimmage. That was followed by an impressive play by the Ram defense and Alex McLean who stopped the rush. Mona Shores called a time out at the 1:08 mark and set up their play, but the Rams defense came through again. The Sailors pass was complete, but Leo VanderWiel pulled down the Sailors receiver at the 2-yard line. The ball was turned over on downs and the Rams let the clock wind down since they were in dangerous territory.

The second half showed the Rams defense was firing on all cylinders. They let the Sailors know in the start of the third quarter that nothing was going to be given to them. Harmsen stopped the Sailor ball carrier on his own kick off at the Mona Shores 47. The Sailors rush on the next play was stopped by Watts, and a fumble was caused on the next play, but the Sailors recovered. They were looking at a fourth-and-seven at the Rams 26 when VanderWiel broke through for the quarterback sack. The Rams whittled away at the yardage, with almost all of the plays on rushes, as the time continued to run down and the game worked its way into the fourth quarter. McLean, Cooper Nairy and Spees moved the ball down to first-and-10 at the start of the fourth. A McLean rush at the start of the quarter looked like it was promising, but the ball was marked inside the one. The Sailors defense rose up and stopped the Rams on the next three plays.

The Rams defense smothered the Sailors and with their backs at the goal line had to punt to give the Rams great field position. Unfortunately, a Ram fumble gave the Sailors the ball back at their own one again with five minutes to go in the game. Their series moved the ball to their own 28, but they came up short on their fourth-and- seven at the 28 on an incomplete pass. The series also ate plenty of time off the clock with Rockford getting the ball with just 2:32 left in the game. Spees had a tough run to move the ball from the 25 to the 19 and a Nairy rush moved the ball from the 19 to the 10 with just :30 left in the game. Ahern took a knee to close out the game.

The JV team will now travel to take on the Grand Haven Bucs, Thursday, Sept. 26. Kick off is slated for approximately 6:30 p.m. 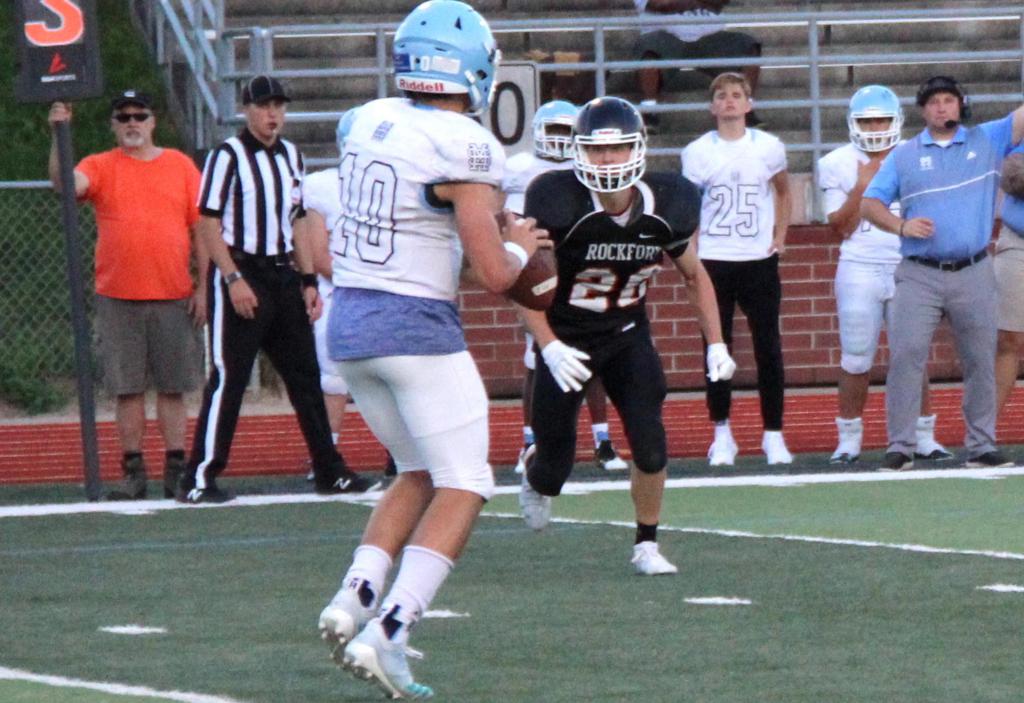 Leo VanderWiel hones in on the Sailors quarterback. ~ Photo by Jeannie Gregory 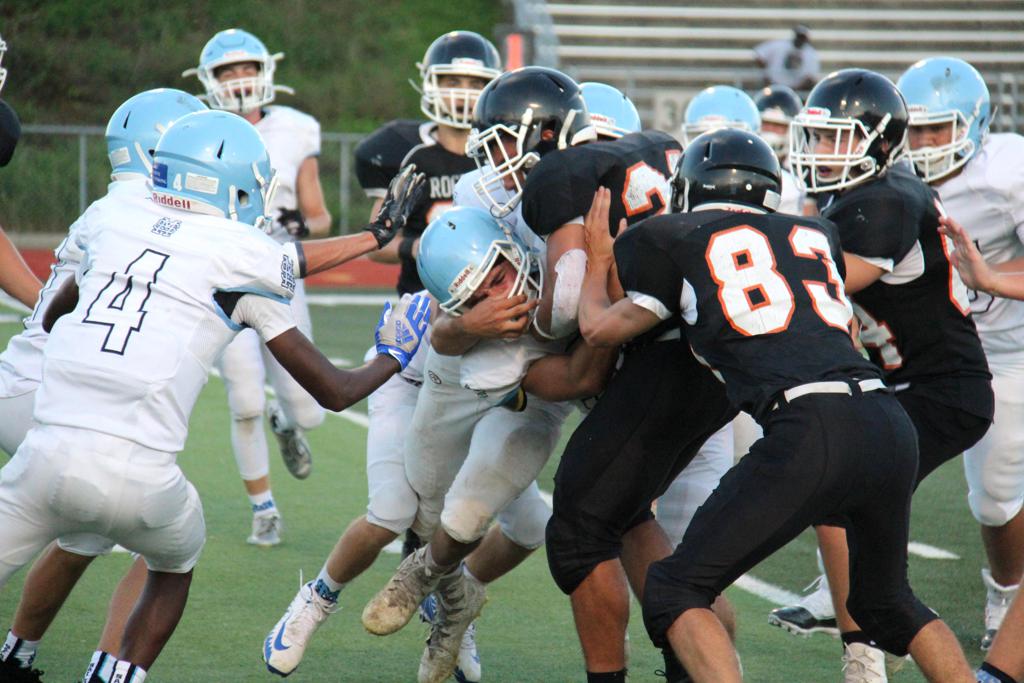 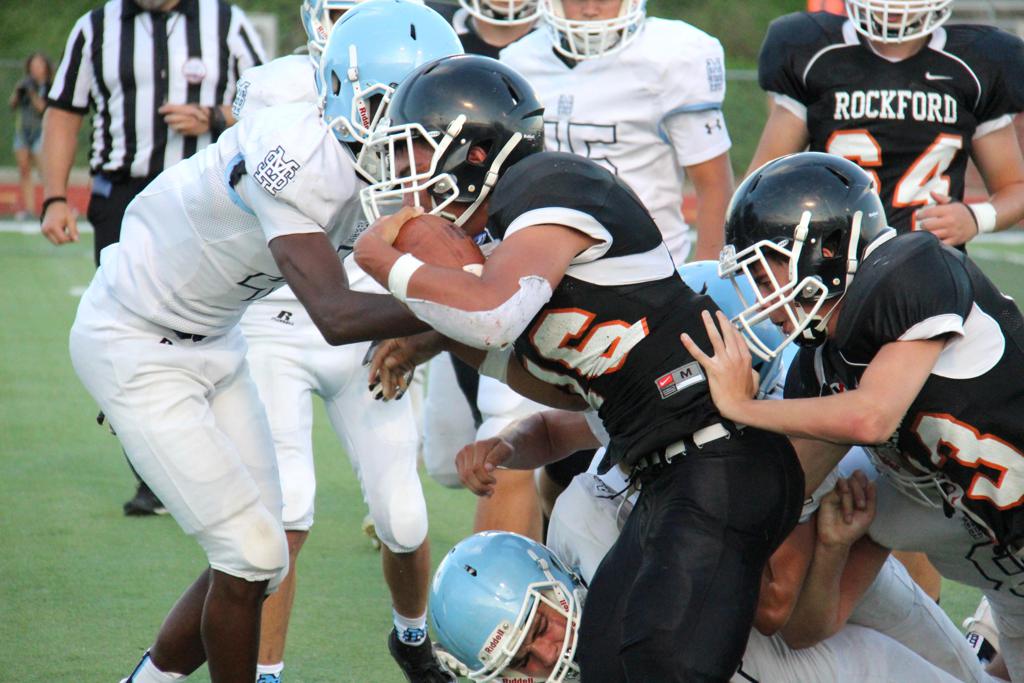 Gabe Spees carries the ball for the Rams. ~ Photo by Jeannie Gregory 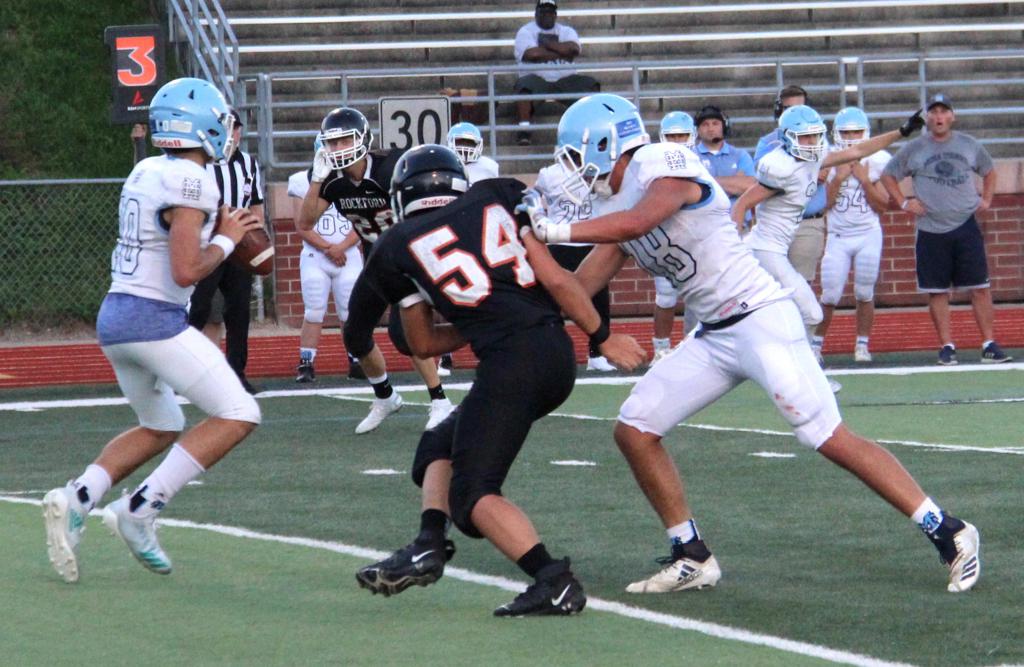