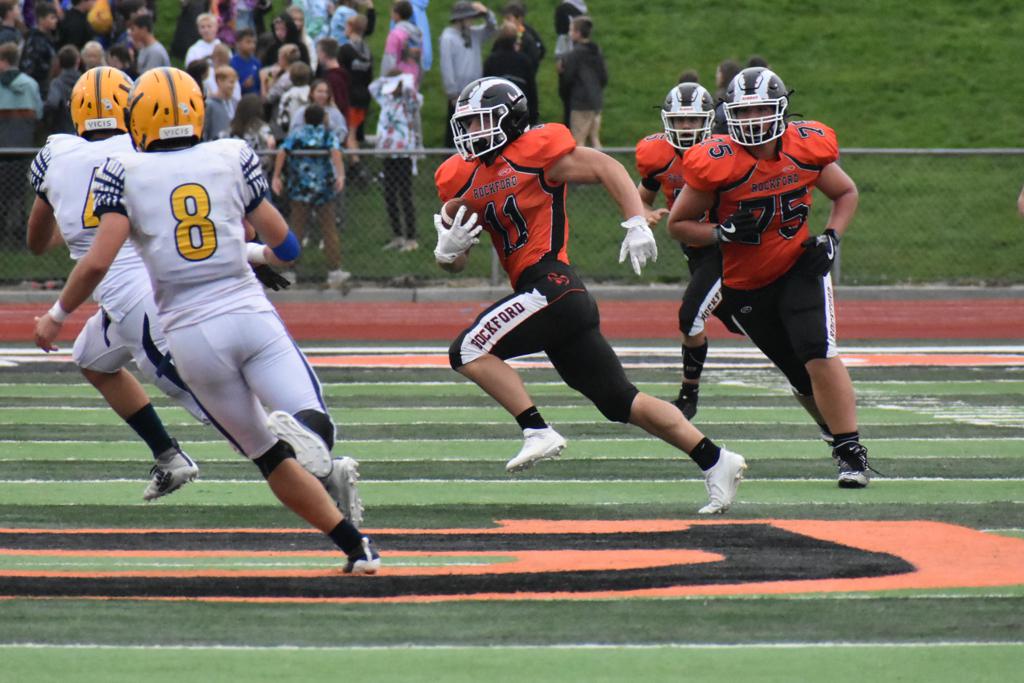 Rams move to 5-0 on the season

On paper it seemed to be a mismatch of epic proportions at Rockford on Friday, Sept. 27. An undefeated Rockford squad that had defeated two teams (Muskegon Mona Shores and Grand Rapids Christian) ranked among the top three teams in the state in their respective classes against a Grand Haven team that entered the fray at 1-3 while scoring a grand total of 14 points in their last three games (all losses). When the dust had settled it was Rockford who breathed a huge sigh of relief after coming out on top by the count of 19-14 to move to 5-0 as the season crossed the midway point.

It was something of a surreal night both in the time frame and the accompanying anticipation of inclement weather that left many wondering if the game would even be played until the following day. As to the game's start time, a memo issued by the state of Michigan recommending games being completed before dusk due to the threat of Eastern Equine Encephalitis (EEE) warranted the kickoff being changed from 7 p.m. to 5 p.m. The weather issue never materialized though as storms ranged seemingly all over west Michigan, but somehow spared the immediate Rockford area. Amazingly, the issues had little effect on the attendance as a near capacity crowd filled the home stands for Rockford.

The game began in an overwhelming fashion for the Rams as almost before the crowd had settled in it was a 12-0 Ram lead. Visions of a running clock and an early exit home danced through the heads of fans from both teams. However, a determined effort from Grand Haven defensively and the failure of the Rockford offense to capitalize on several chances to expand the lead left the Bucs with an opportunity to get back in the game and they embraced that chance for the remainder of the game.

"You really have to give a tremendous amount of credit to Grand Haven for the amount of effort and desire they exhibited tonight," said Rockford head coach Ralph Munger. "Football is an emotional game and a grind week after week. It can be a ‘head game’ if you want to call it that. I really want to talk to the kids and see what their thoughts were about how we played tonight. Maybe we relaxed a little bit after last week's win, I don't know. But we have a lot of work to do if we want to achieve what I believe this team is capable of.”

After forcing a quick three-and-out from Grand Haven on the opening possession of the game, Rockford wasted as little time as possible grabbing a lead they would never relinquish. Junior quarterback Chris Corey rolled right on the Rams’ initial play from the Buc 48 before firing a deep pass down the right side to senior wide receiver Eli Haddad. Haddad deftly reeled in the pass in stride and waltzed into the end zone untouched to give Rockford a 6-0 lead with 10:51 still left in the opening quarter. Junior kicker Teagen Lenderink added the point after and just like that it was a 7-0 Ram lead.

That was just the start of an explosive Ram beginning. Grand Haven proceeded to fumble on the next offensive play, and it was recovered by junior defensive lineman Nick Higgins at the Buccaneer 19-yard line. The Ram offense couldn't generate a first down on that possession and had to settle for a 32-yard field goal from Lenderink that made it 10-0 just a few minutes later. But the early carnage still wasn't done as Grand Haven was again quickly forced into a punting situation from their own 26. But an errant snap sailed over the punter's outstretched hands where he kicked it out of bounds in the end zone to extend the lead to 12-0 following the safety.

Despite taking over at the Buc 35 following the free kick after the safety, the Rams were unable to capitalize on the great field position and increase their lead. A Rockford drive later in the second quarter fell short at the Grand Haven one-yard line to set the stage for the drive that changed the tone of the game. Using 10 plays and overcoming a holding penalty, the Bucs marched 99 yards to score a touchdown with only 1:32 left in the first half and make it a 12-7 game after the conversion. A last-ditch Rockford drive got into Grand Haven territory, but the half ended with a 12-7 Rockford lead.

Rockford received the second half kickoff and appeared ready to grab a modicum of control on the contest as they used eight plays to cover 67 yards to stretch the lead to 19-7. Senior fullback Jaiden Friesen did the honors as he burst over the left side and danced into the end zone with 8:40 left in the third stanza. Lenderink's second PAT completed the scoring for the evening for the Rams.

A second lengthy Buc drive made a few Ram hearts skip a beat late in the contest to make it a 19-14 game. Using 17 plays and covering 87 yards while converting a pair of fourth down conversions, the Buccaneers scored on a 17-yard touchdown pass with 3:24 left in the game to trim the margin to five points. After sending a short kick out of bounds the visitors would never see the ball again. Friesen converted one first down for the Rams on the ground while junior running back Jacob Vega converted a second to seal the game. Corey was able to kneel out the clock and the Rams emerged victorious on Homecoming 19-14.

"There were so many things we worked on in practice this week that just didn't show up today in the game," said Munger. "In the end. it was a win and wins are extremely hard to achieve in football, so I have to acknowledge that. Caledonia will be a difficult game next week, too. They are a greatly improved team and will also give us everything they have just like Grand Haven did tonight."

Rockford totaled 256 yards in the contest with 145 on the ground and 111 through the air. Grand Haven had a game total of 232 yards with 121 via the rush and 111 passing. Rockford had firm control of the contest defensively for the vast majority of the contest. Outside of the 99 and 87-yard TD drives, Grand Haven had only 46 other yards of offense on the evening.

Friesen led the Ram ground attack with 89 yards on 22 carries. Junior running back Ethan Nash added 22 on six attempts while Vega accounted for 21 yards on his six rushes. Corey was a solid 9 of 13 for 111 yards and one TD. Haddad had five receptions for 91 yards and senior wide receiver Mitch McGrone added a pair of catches for 11 yards.

Next up for Rockford is a trip to Caledonia that is scheduled for 7 p.m. Friday, Oct. 4. But, be cognizant of the possibility of that start time changing as well due to the EEE threat. The Fighting Scots are only 2-3 on the season but included in that tally is a big win over a very good Cedar Springs team. They were also very competitive in close losses to East Kentwood and Hudsonville. 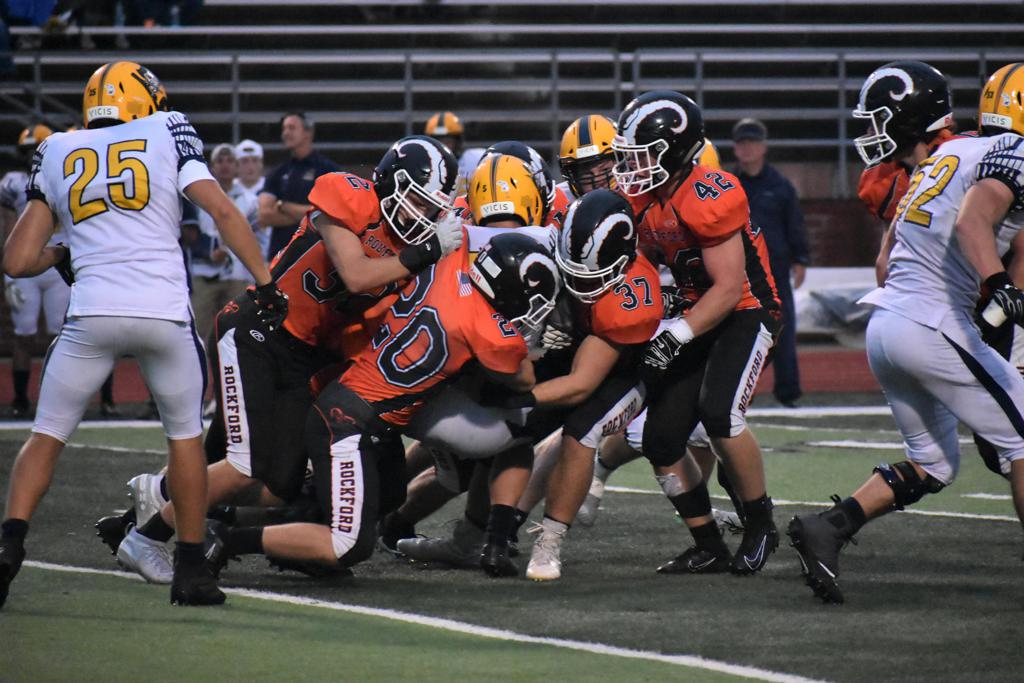 A herd of Rams brings down a Buc ball carrier. ~ Photo by Connie Hill 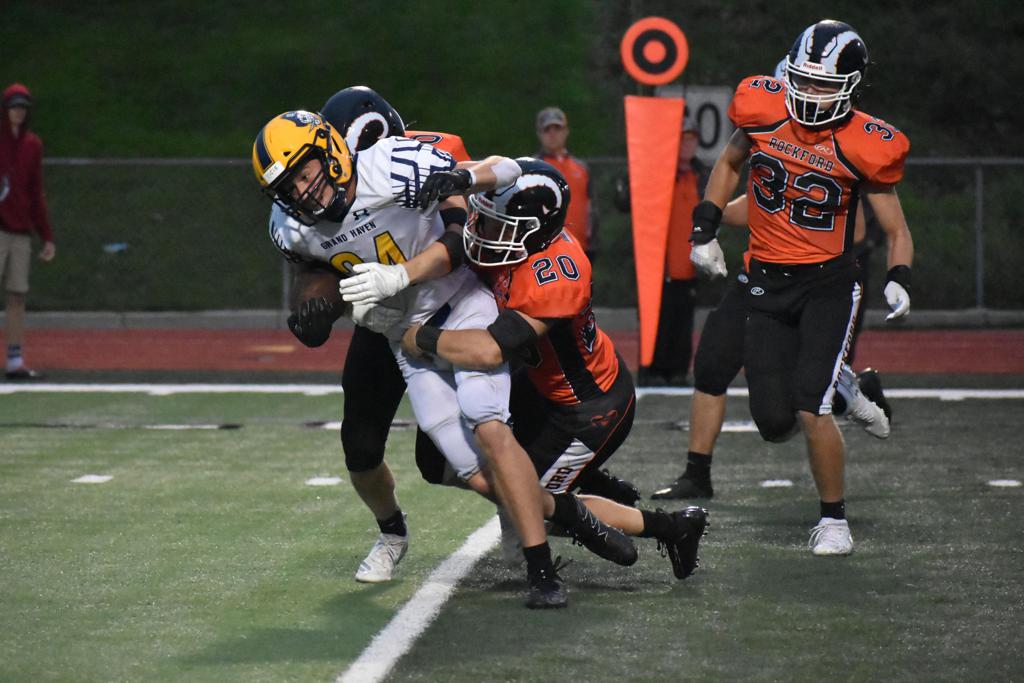 Andrew Lanham and Ben Tadych work together to bring down a Grand Haven ball carrier. ~ Photo by Connie Hill 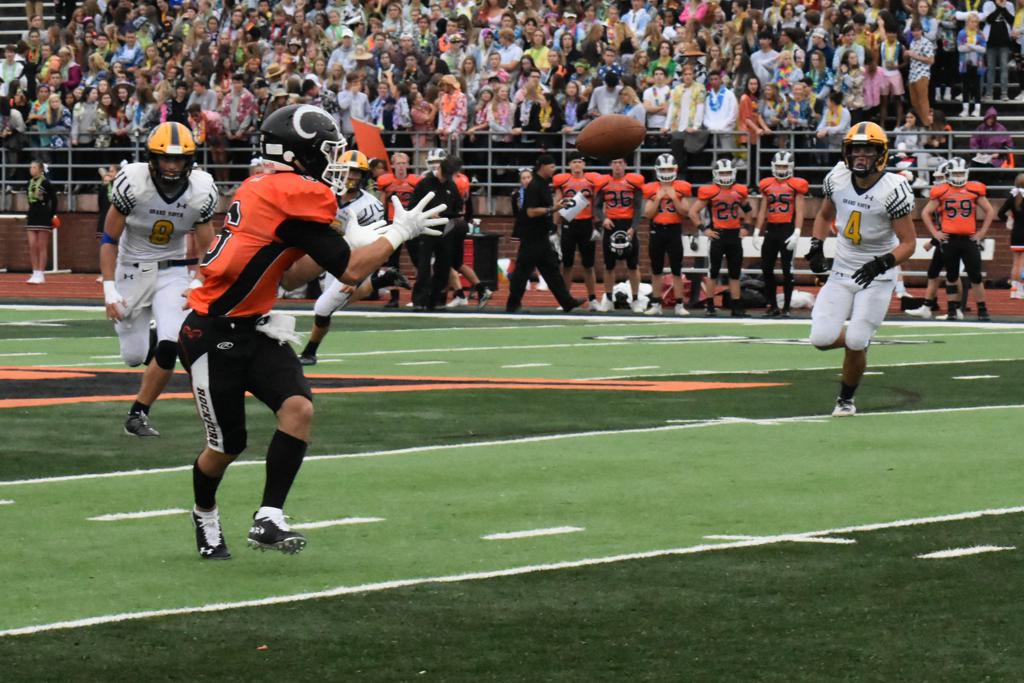 Receiver Eli Haddad ready to reel in the ball. ~ Photo by Connie Hill 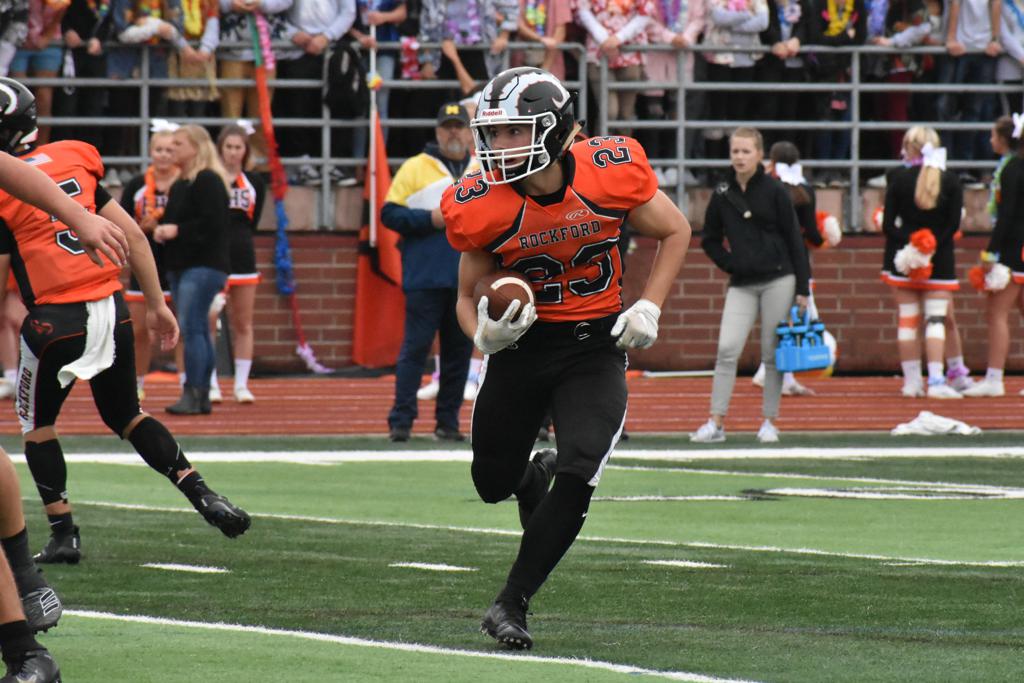 Ethan Nash works his way toward teh goal line. ~ Photo by Connie Hill 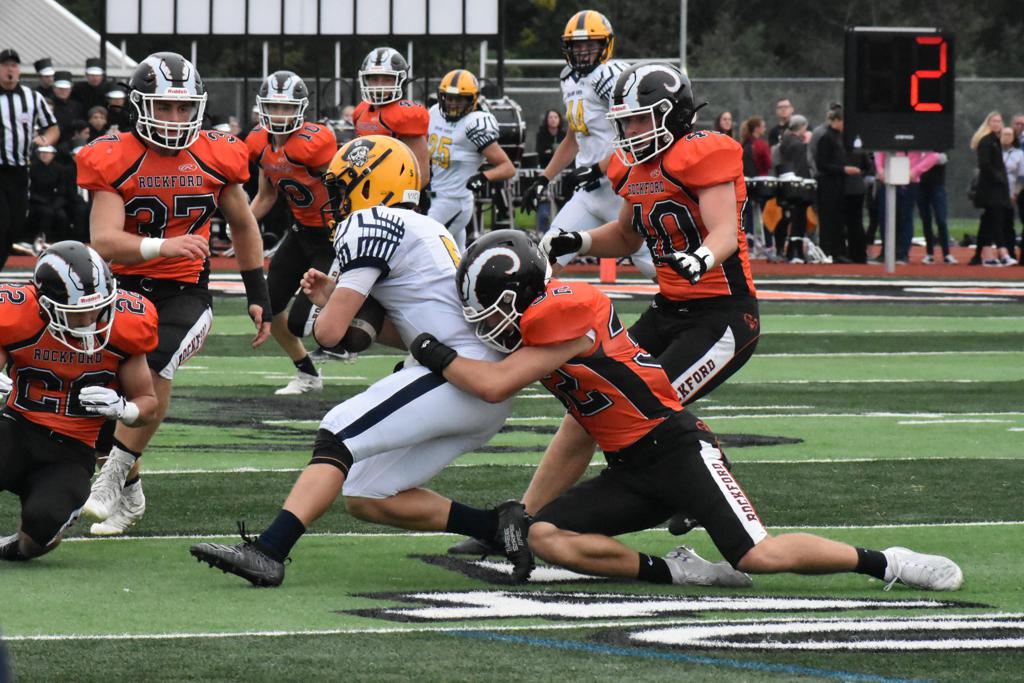 Kaden Seelye in on a tackle. ~ Photo by Connie Hill 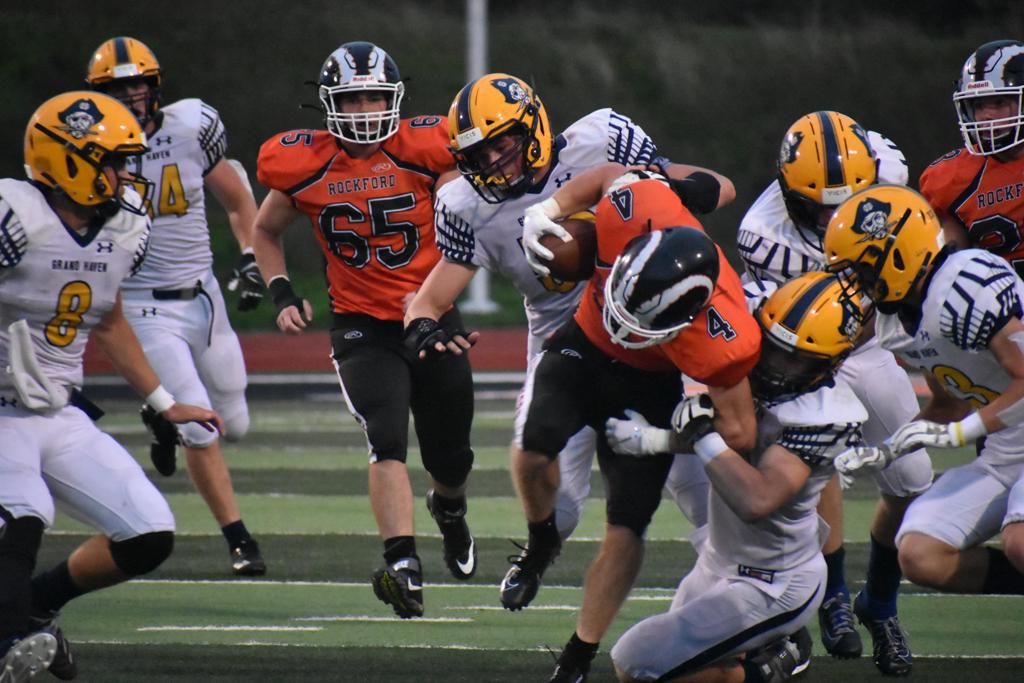