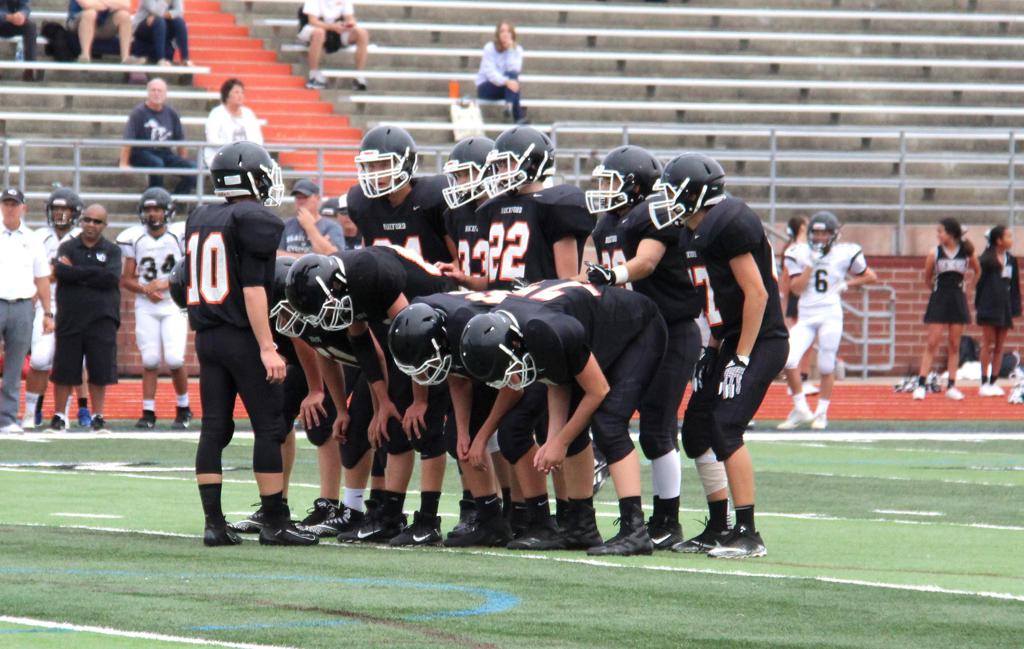 ROCKFORD – On Thursday, Oct. 3 on their home field, the freshman football team was staring a loss in the eyes for the first time this season. The Rams were on the wrong end of an 8-6 score and time was quickly running out. There was under four minutes to go in the game and Caledonia had just connected on a huge pass play that had them knocking on the door of the end zone with a first-and-goal. Rockford’s defense made a huge stand and didn’t allow the Fighting Scots to break the goal line. Caledonia had to punt and the Ram offense went to work making their way down the field, but were unable to convert on a fourth down and had to punt. The Caledonia player fumbled the ball and the Rams were able to cover the ball. Rockford worked their way again down the field and with under three minutes to go quarterback Mac VandenHout connected with receiver Seth Evans for a touchdown to move the score to 12-8. To try and secure a win, the Rams coaching staff went for a 2-point conversion and VandenHout connected with Colby Weston to move the score to 14-8. On a roll with time running out, the Rams kicked off and Caledonia fumbled yet again, and the Rams were able to gain control of the ball again, letting time run out and claiming the 14-8 victory and protecting their 6-0 season record.

The first Ram score happened in the first quarter, just four plays in. Running back Tyler Hoek set the Rams up with an impressive 50-yard run. Rick Beison received the honors of scoring for the Rams on a 3-yard run. A high snap caused the PAT to be unsuccessful, and the Rams held a 6-0 lead. Caledonia answered on their next series on a few long throws and tough runs. The Fighting Scots went for a 2-point conversion and held the 8-6 lead until the series above. The Ram defense had a number of impressive defensive stands to keep the Fighting Scots off the board.

“Caledonia was a tough team that is well coached and has some tough physical players,” shares Ram head coach Tim Saur. “We were lucky to get a win tonight. Their mistakes helped change the game in our favor.”

Next up, the Rams travel to Hudsonville. Play time will depend on the EEE threat.