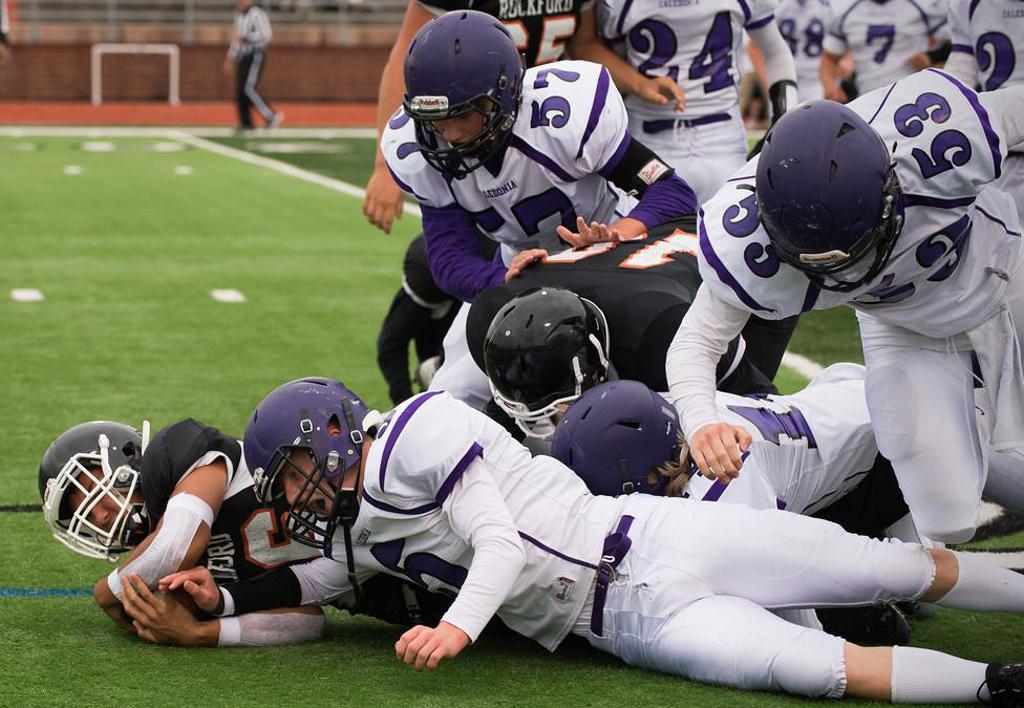 Gabe Spees is brought down by a pack of Fighting Scots. ~ Photo by Leda Vander Laan

ROCKFORD – The Rams JV football team was able to move their record to 6-0 at The Ted, Thursday, Oct. 3. The team easily topped the Fighting Scots 28-0 and scored three touchdowns in the first half to leave no doubt they would claim the victory. There were plenty of substitutions in the second half, with head coach Brian Richardson getting his roster plenty of valuable playing time.

Rockford was able to notch their first score right before the end of the first quarter. Ram quarterback Zack Ahern connected with receiver Elliot Young on a 9-yard pass and Young found the end zone for the first score of the game. An unsuccessful PAT had the Rams holding a 6-0 lead. The second quarter found the Rams scoring twice. The first was on an exciting 25-yard run by Alex McLean that found him finding the end zone. The Rams went for a 2-point conversion and it was successful on a pass from Ahern to Sam Watts. Some trickery came out of Richardson’s playbook with an onside kick that found the Rams able to execute the play beautifully and regaining possession of the ball. A 30-yard pass from Ahern to Young put the Rams near the end zone for the second time in the quarter. Ahern did the honors of putting the ball over the goal line with a 1-yard sneak. The PAT from Dolan Harmsen was good and the Rams owned a 21-0 lead at the half.

Caledonia received the ball at the beginning of the third quarter and the stalwart Rams defense had them going 3-and-out. The Rams drove down the field off of runs from McLean and a big yardage play from Jonathan Maat that was unfortunately called back due to ineligible receiver downfield penalty. The Rams worked to the Caledonia 46-yard line and were looking at a third-and-16 when Ahern connected with Watts for a touchdown. The Harmsen PAT split the uprights and the score moved to 28-0.

The fourth quarter did not offer any scoring, but did offer a few Ram highlights, including an interception by Maat and some nice runs by Derrik Schuring, Caden Hyink, Luke VanderWiel and Leo Vanderwiel off the hands of RJ Todd, who stepped in as quarterback for the Rams. With a running clock, the time dwindled quickly, and the game ran out of real estate with the Rams claiming the 28-0 victory.

Next up is a road trip for the Rams to Hudsonville. The game start time will depend on the EEE threat. Check www.rockfordrams.org for schedule updates. 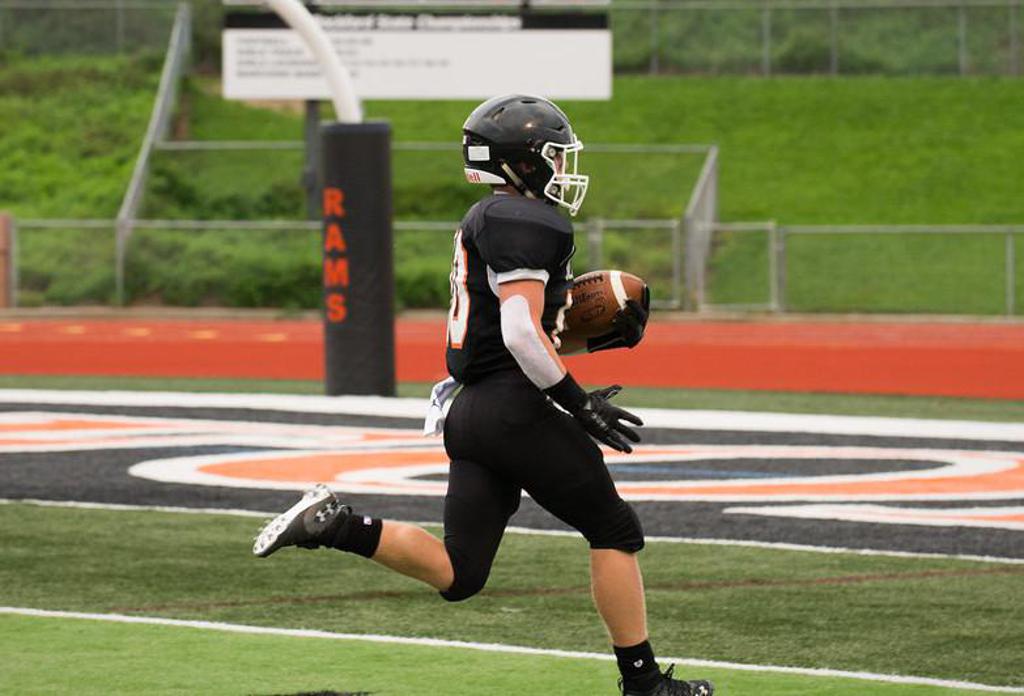 Alex McLean scores a touchdown for the Rams. ~ Photo by Leda Vander Laan 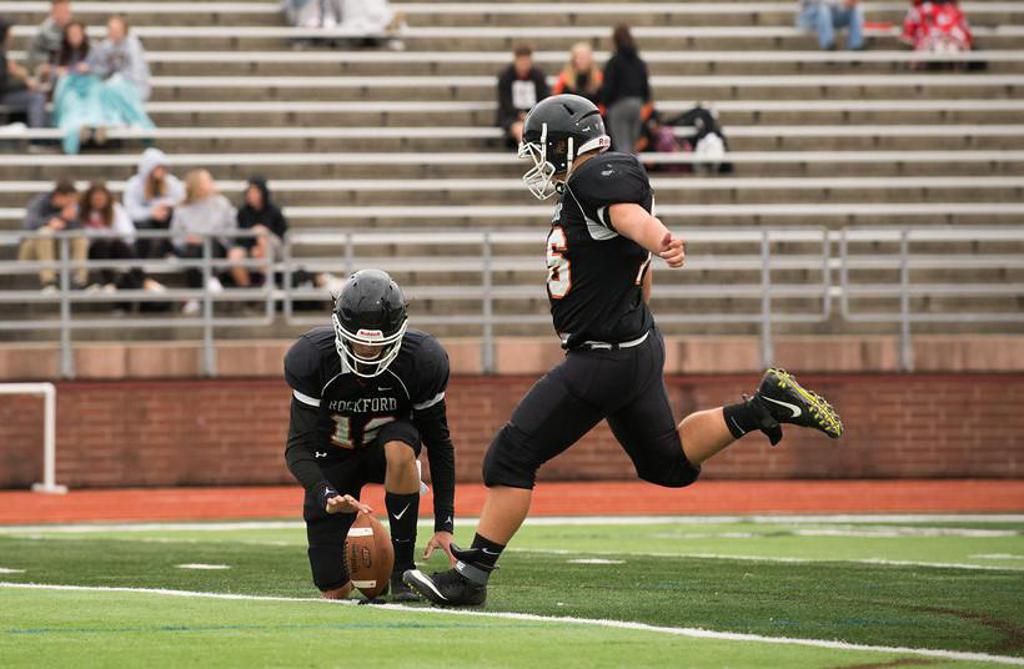 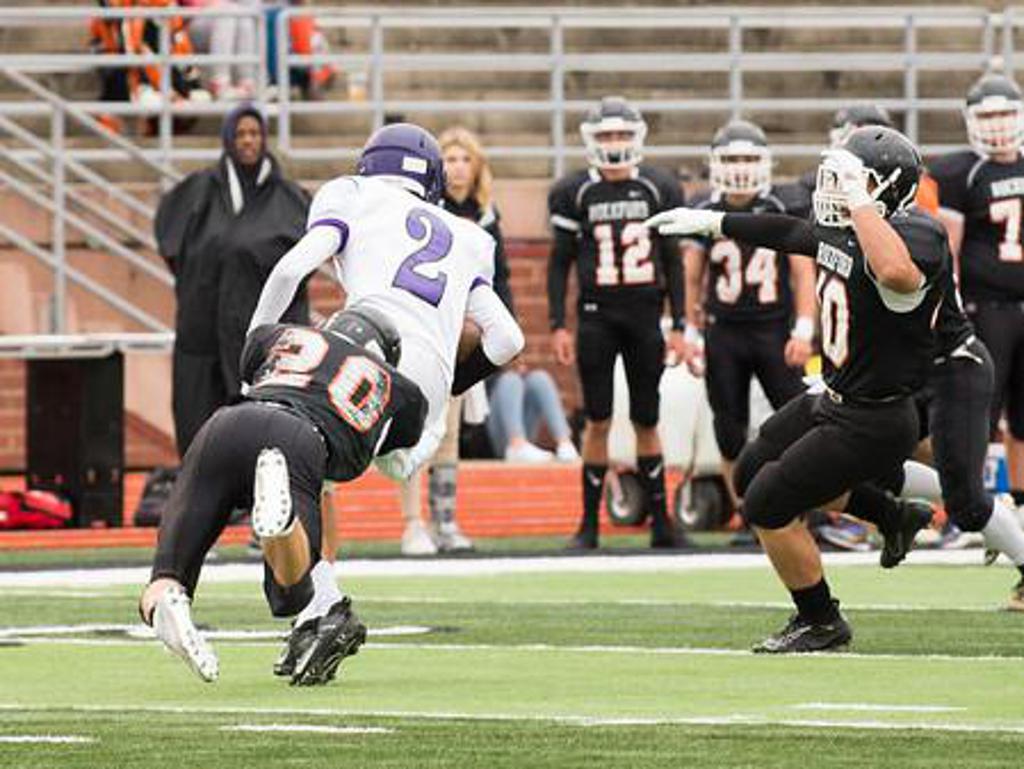 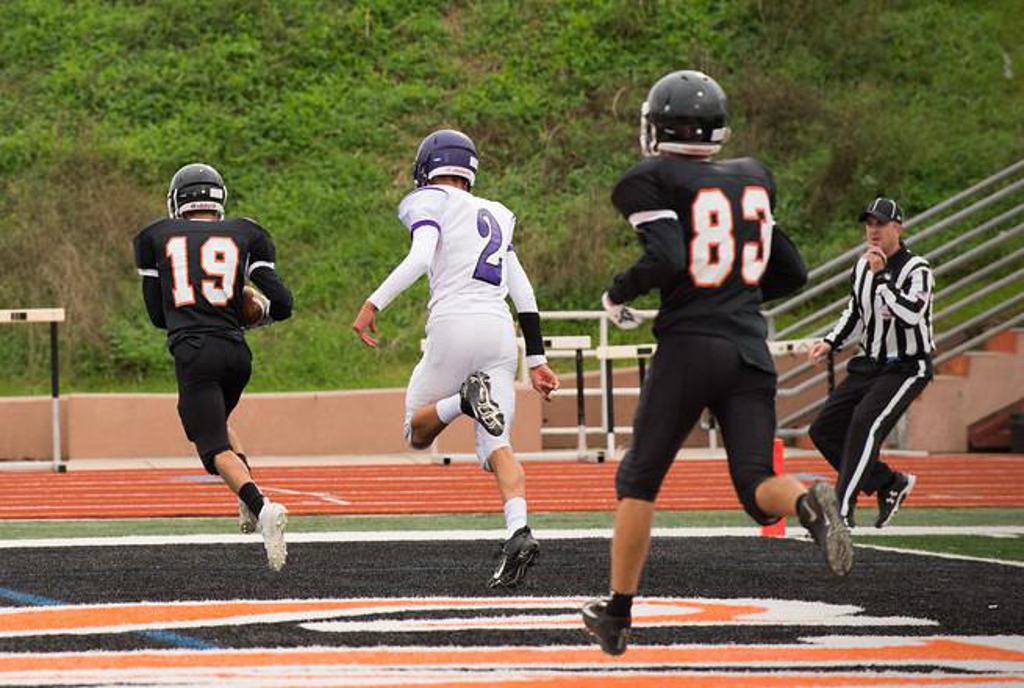 Elliott Young runs to the end zone after a reception against Caledonia. ~ Photo by Leda Vander Laan

More photos of the game may be found by clicking here.