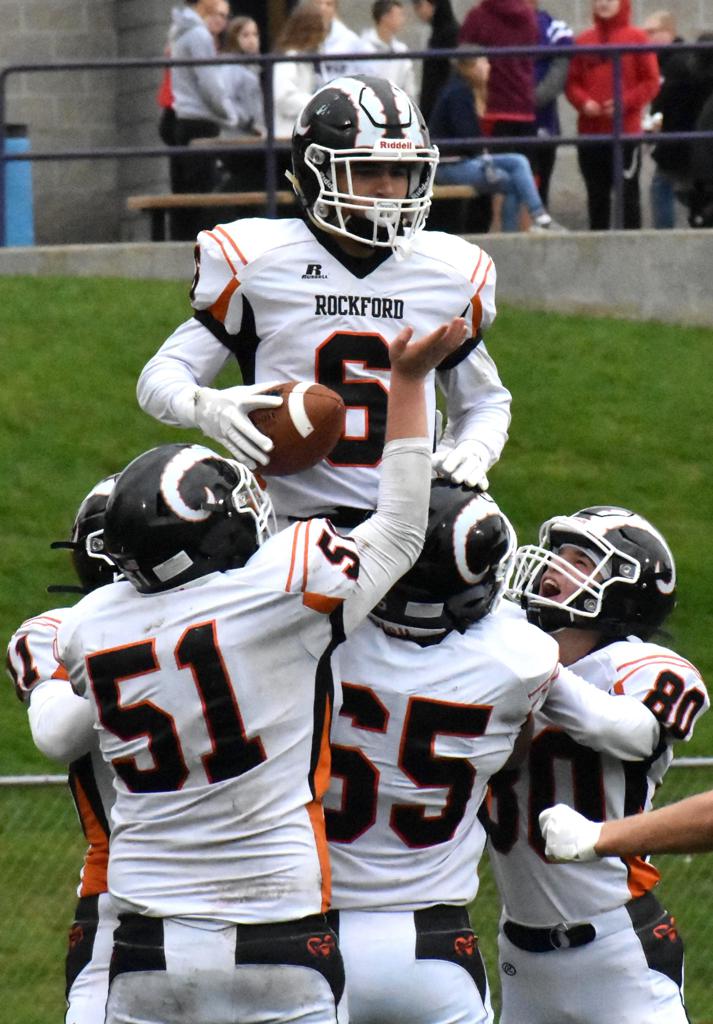 CALEDONIA – The Rams varsity football team (5-0 and 2-0) took a trip to Caledonia, Friday, Oct. 4, and took on the Fighting Scots in an OK Red battle. Caledonia, despite carrying a 1-2 conference record, gave their Red opponents plenty of competition. They played East Kentwood in Week 3 and fell 23-14, and then played 3-0 Hudsonville in Week 4 and were beat by just a touchdown 27-20. In Week 5 they rolled over West Ottawa by a 49-14 score to prepare for their match-up against the Rams. Rockford was certainly tested in the game but ended up claiming a 10-7 victory to protect their undefeated season and move their overall record to 6-0.

“It was a great night for the Rams with regards to demonstrating perseverance and hanging tough together as a TEAM in the face of adversity against a very formidable foe,” said Rockford head coach Ralph Munger. “Caledonia is a very talented and physical team. They are a big, strong team and they have fought really hard in the OK Red against some quality opponents. We’re just very fortunate that enough good things happened to come away with a win.”

One of the good things that happened was the Rams’ first score as the seconds were winding down to mark the end of the second quarter. The series started after Ram Alex Karas suffocated a Caledonia rusher on a third-and-four play at the 19-yard line causing them to punt. Ethan Nash picked up the ball at the Caledonia 45-yard line and ran it back to the 36. Quarterback Chris Corey threw two incomplete passes before connecting with receiver Eli Haddad on third down. Haddad expertly reeled it in and ran to the end zone with just .59 ticks left in the half. Teagen Lenderink split the uprights for the PAT and the score was 7-0 Rams. Caledonia received the kick off with hopes of answering the score, but linebacker Cole Gleason ended their offensive hopes by stifling the Caledonia rusher in back-to-back tackles that had the Fighting Scots gaining only one yard in the two plays before the buzzer sounded.

It took until halfway through the third quarter for the next Ram scoring drive. Caledonia was looking at a third-and-23 at their own 7-yard line, when Andrew Lanham and Caleb Broderick joined forces to bring down the Caledonia ball carrier at the 22. The punt went out of bounds and the Rams were looking at first-and-10 at the 50-yard line to start their series. It took complete passes to Jaiden Friesen for 16 yards and Brock Holwerda for 15 yards, and rushes from Jacob Vega, Luke McLean, and Grant Bisbee to move the ball to the Caledonia 15. The Rams were looking at a fourth-and-nine when Lenderink connected for a field goal from 35 yards out to move the score to 10-0, with 2:12 left in the quarter.

There were plenty of rushing attempts by Caledonia’s work horse, running back Carson VanderHoff, as the third quarter wound down and the fourth began. He had been testing the Ram defense all night and this drive was no different. The Caledonia offensive drive, that started at their 20, was also aided by a roughing the passer penalty on a fourth-and-10 play that moved them to the 35-yard line. VanderHoff continued to churn up yards with rushes in small spurts as Ram Ben Tadych and Reid Nicholson stepped up again and again on defense to quiet the damage. Unfortunately for the Rams, VanderHoff showed he had good hands as well as strong legs when he caught a 23-yard touchdown pass from Caledonia quarterback Jack Snider in the end zone to move the score to 10-7. The 13-play 80-yard drive took 6:29 off the clock.

The Rams’ next series ended with an interception that found Caledonia at their own 29-yard line with a 3-point deficit and facing a clock with just 3:24 left. They moved the ball down the field, again utilizing the running talents of VanderHoff, and a 20-yard pass play that found them at the Rockford 25 with just 1:55 left. The Rockford student section lent their voices to the game cheering and chanting, adding to the stress for the Fighting Scots. The Ram defense came up big, and Caledonia couldn’t move the ball any closer to the goal line. Facing a fourth-and-11 with just .31 seconds left, they trotted out their kicker for a 43-yard field goal – a tall order on a cold night. His attempt fell short and the Rams captured the 10-7 victory.

Friesen paced the Rams in rushing, carrying the ball 12 times for a net of 50 yards. Nash had three carries for 16 yards and Jacob Vega had five carries for four yards. Quarterback Chris Corey was 4-of-8 for 76 yards passing with a touchdown. Caleb Engelsman, who shared QB duties with Corey, was 5-of-10 for 43 yards with two interceptions. Haddad led the receiving corps pulling in three receptions for 50 yards and a touchdown, while Friesen had three for 40 yards. Bradley Rohen-Blanton tallied two catches for 14 yards. Lenderink added a PAT and a 35-yard field goal to the Rams’ offensive stats.

On defense, Tadych led the Rams with 13 tackles, with eight of them being solo. Nicholson tallied 12, Nick McCauley had seven, and Nick Higgins and Cole Gleason had six apiece. Andrew Lanham had four tackles to help the Ram cause.

The Rams will face off against Hudsonville at The Ted, Friday, Oct. 11. Hudsonville is 5-1 overall, their only loss a 22-21 game against Holt in Week 2. Both teams sit atop the conference standings at 3-0. Kick off time is still not concrete due to the EEE threat. 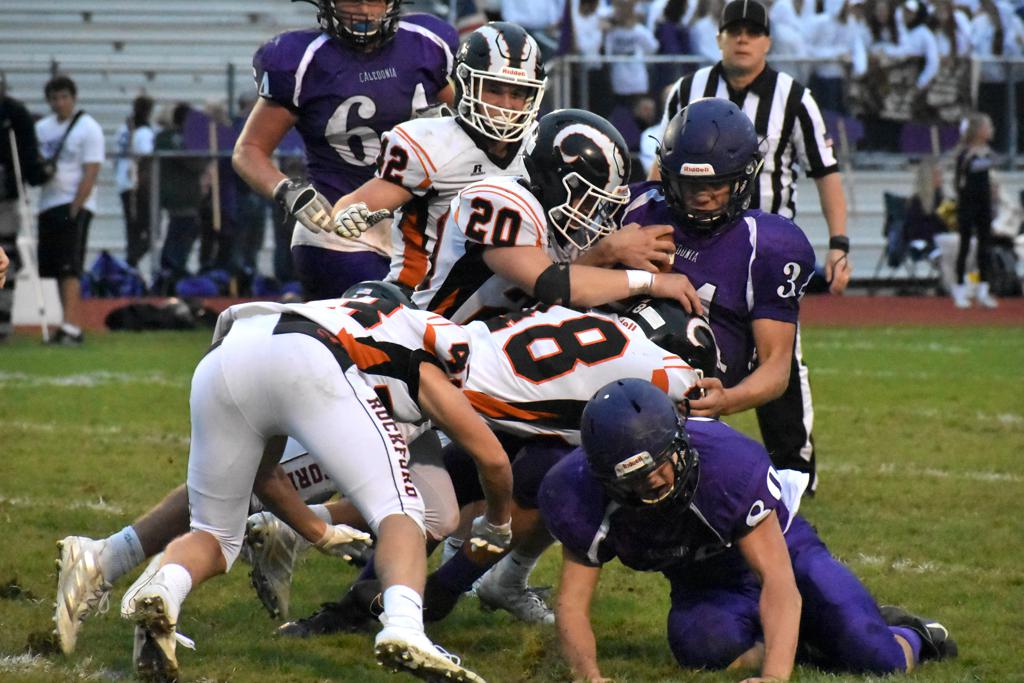 Reid Nicholson and Ben Tadych tallied 25 tackles together on the night to stymie the Caledonia offense. ~ Photo by Connie Hill 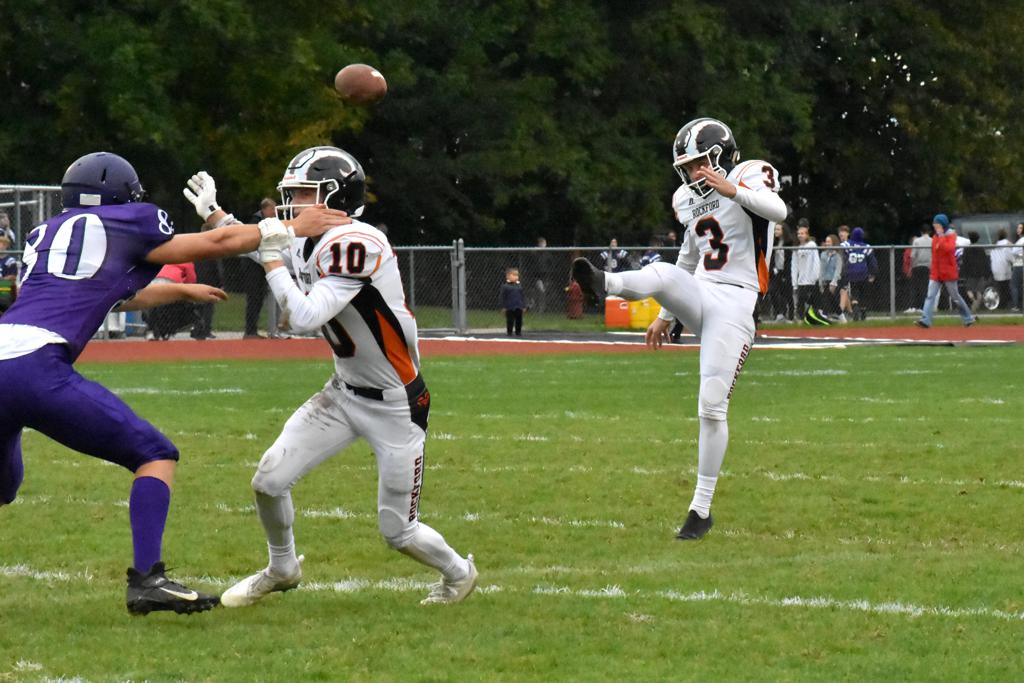 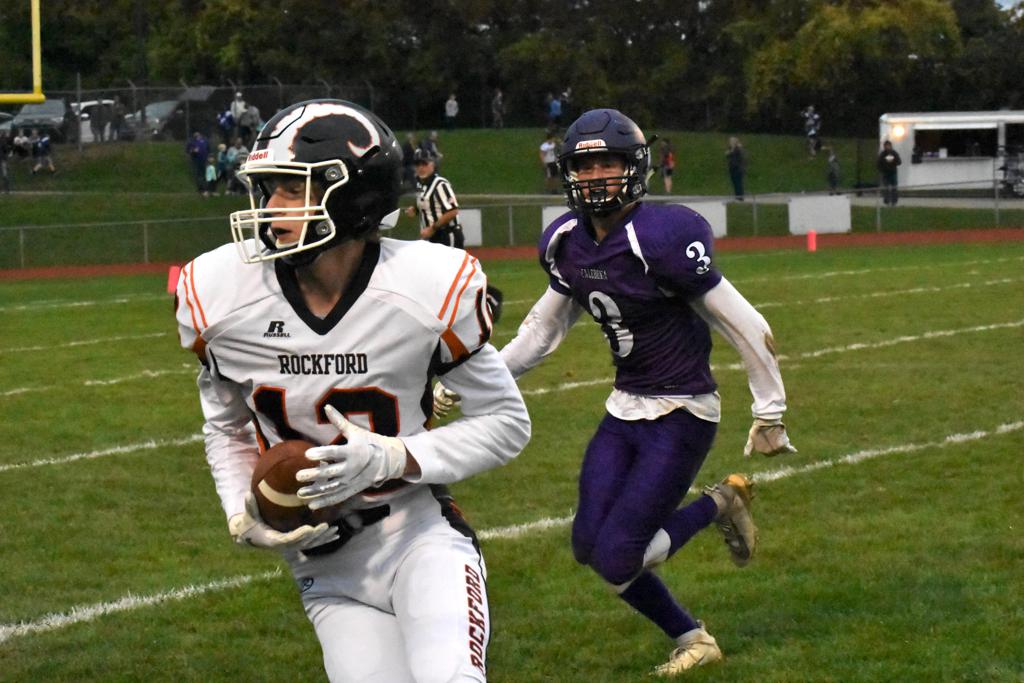 Brock Holwerda pulls in a pass with a Caledonia player in pursuit. ~ Photo by Connie Hill 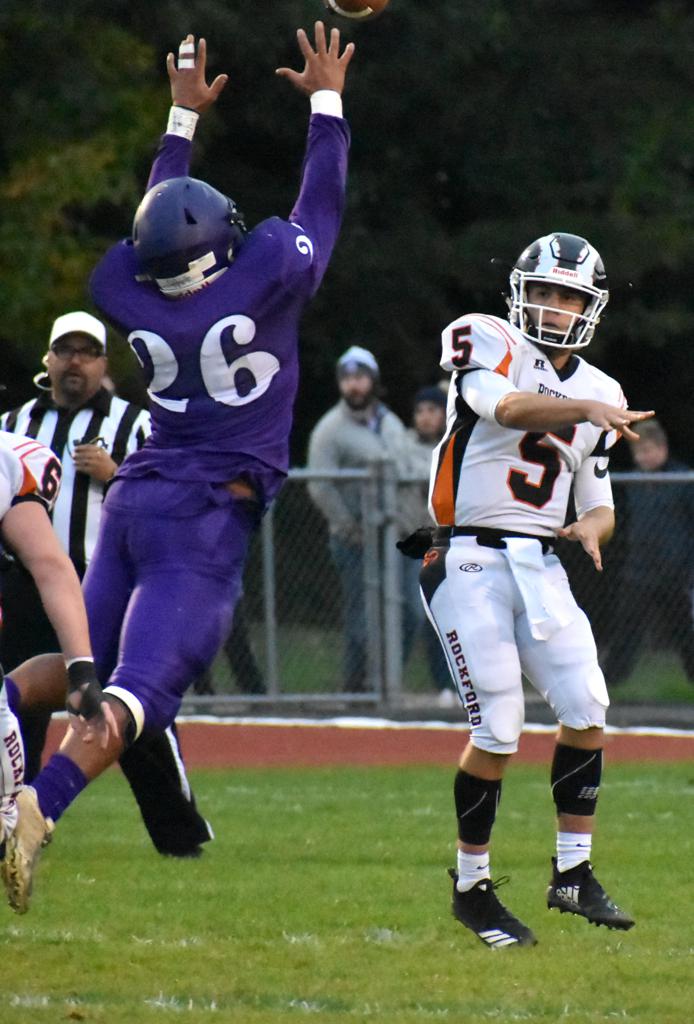 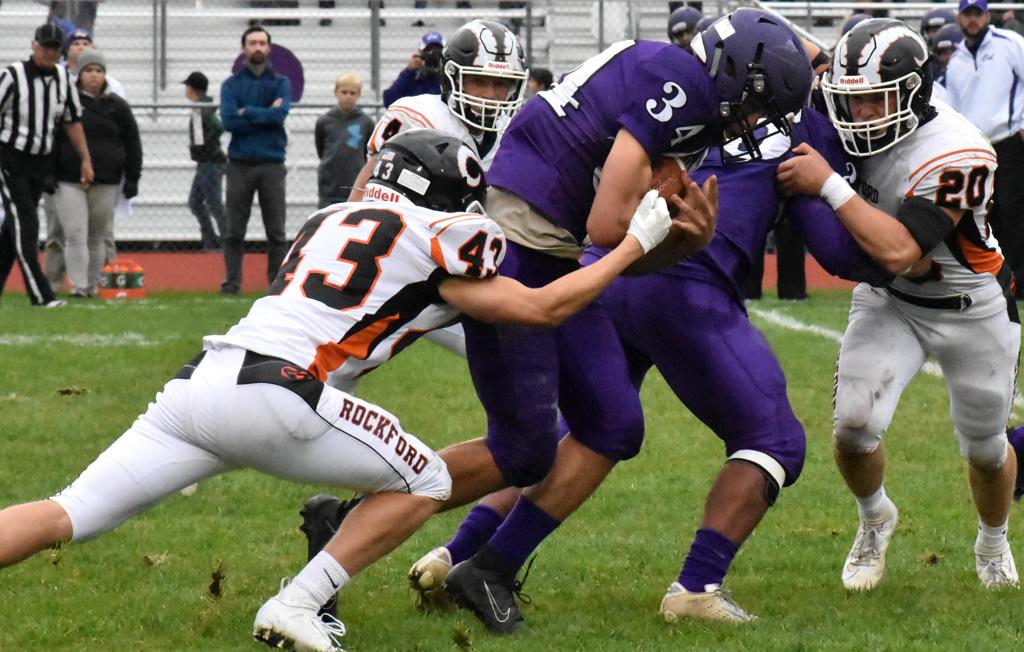 Dylan Dams and Ben Tadych work in tandem to bring down the Caledonia ball carrier. ~ Photo by Connie Hill 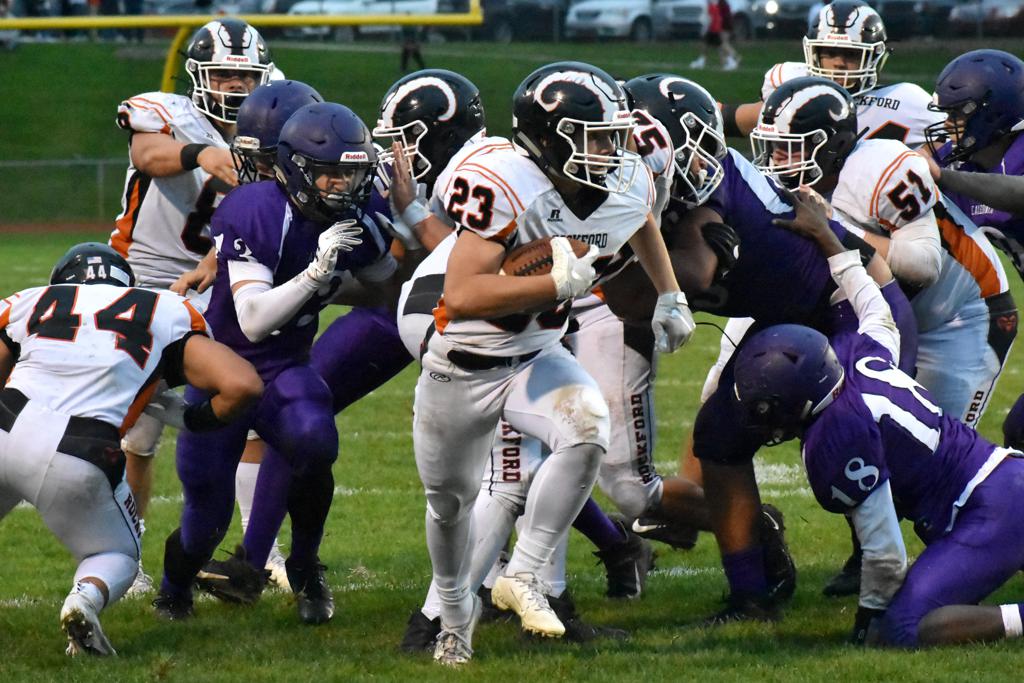 Ethan Nash works his way through the Caledonia defenders. ~ Photo by Connie Hill 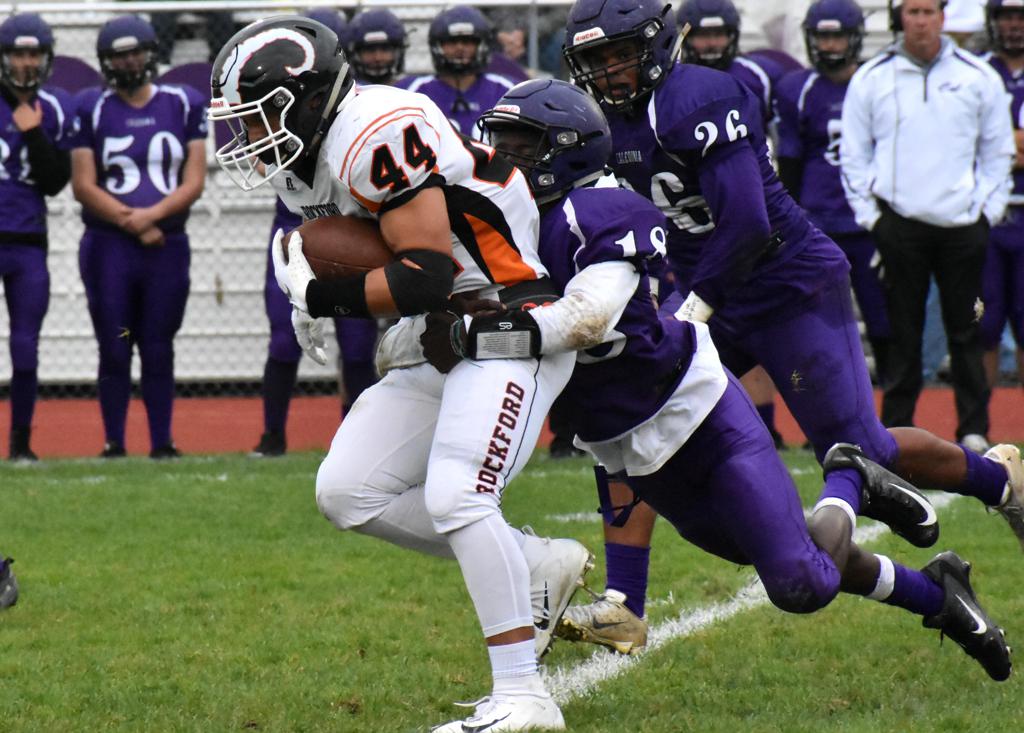 Jacob Vega carries a Caledonia player with him as he works down the field. ~ Photo by Connie Hill 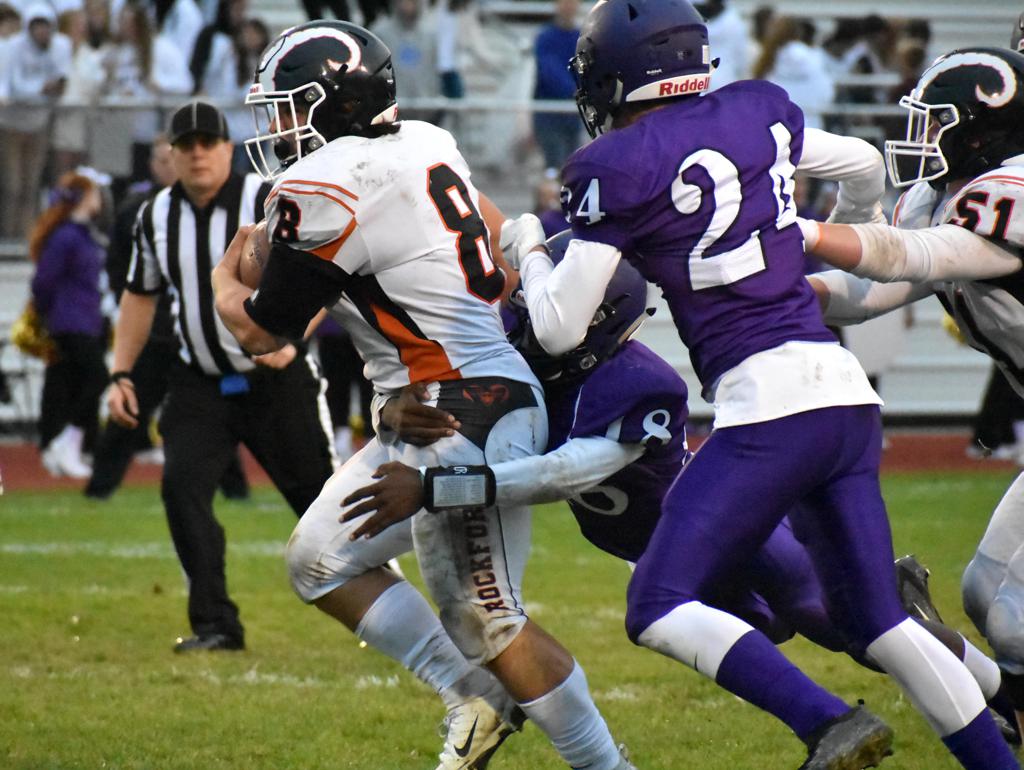 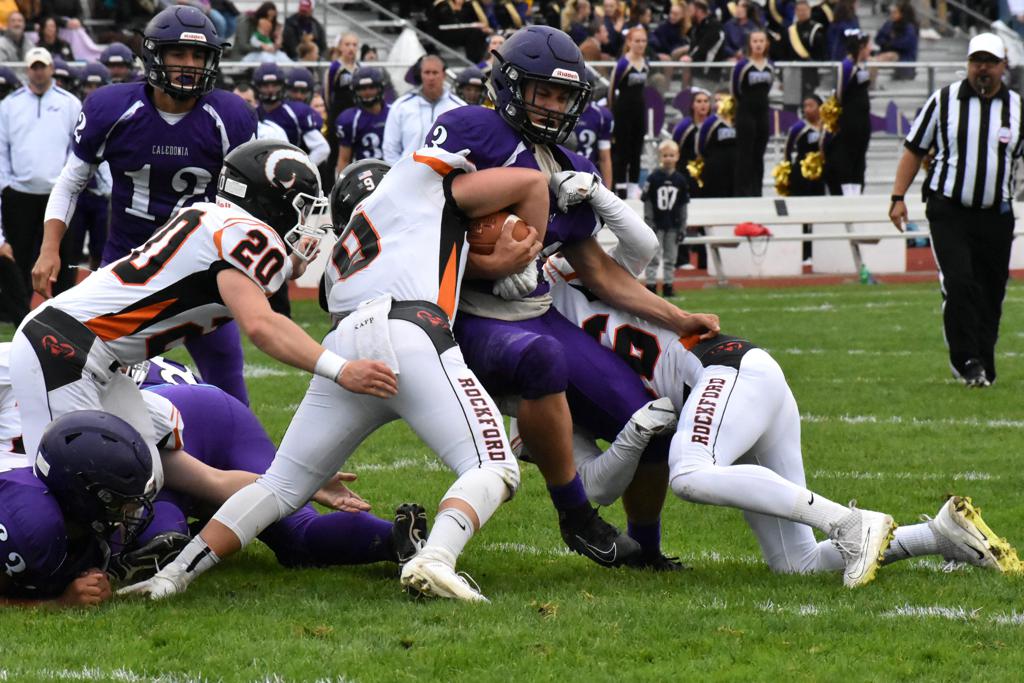