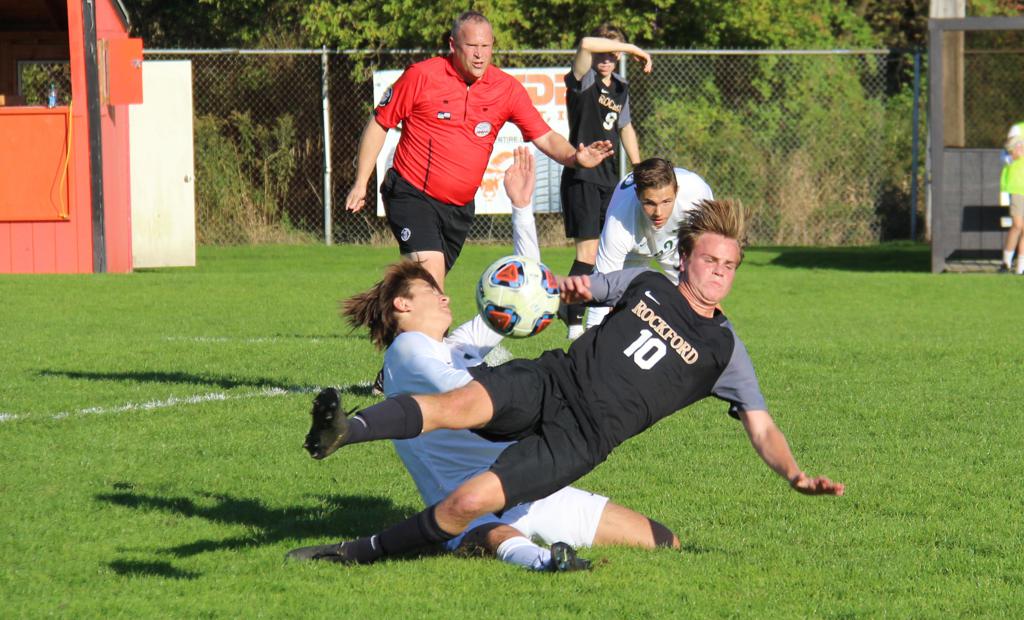 Ram senior Max Dalton mixes it up with a Jenison player. ~ Photo by Jeannie Gregory

ROCKFORD – Rams Stadium rocked, Wednesday, Oct 9, when the RHS varsity soccer team opened up MHSAA District 2 play against the Jenison Wildcats. The Rams, who were 13-3-1 entering the contest, claimed the 2-0 victory in a hard-fought battle, giving their fans plenty of excitement along the way.

Rockford put on a spectacular defensive performance keeping the Wildcats away from not only their net, but their side of the field, a good portion of the game. Ian Johnson, Kyle Switzer, and Sayvion Young put on a defensive clinic suffocating any Jenison offense. Danny Leja had some impressive clears at the start of the game, setting the pace for the Rams. Dominic Meinke showed some impressive footwork as he worked the ball down the field a number of times to pass to forwards Jacob Rademacher, Alex Ducey, and Adam Goushaw and they threatened early in the game. It was Meinke who had a shot-on-goal at the 16:25 mark in the first half but was turned away by the Jenison keeper. Goushaw was able to connect with the back of the net just a minute later to move the score to 1-0, after Gage Martin made an impressive defensive play to get the ball back. Jack Wildes added his talent to the mix to keep Jenison battling on defense.

The second half opened with a bang. The fans hadn’t even settled back in yet when Goushaw scored the second goal of the game with just 73 ticks off the clock to move the score to 2-0. The Ram shots-on-goal came fast and furious after that, with a number of players making attempts. Rademacher (2), Drew Woods (3), Gage Martin (1), Goushaw (2) and Jared Wiltheiss (1) all made attempts before 15 minutes had come off the clock, with some shots going wide, some high and some nice saves from the Jenison keeper. The defense kept feeding them the ball, with Jenison not being able to get the ball even remotely near the Ram goal. Wiltheiss had a nice feed to Aiden Smith for another shot-on-goal to wind down the first 20 minutes of the half, but the Jenison goalie made another impressive save. It took 26 minutes in the second half before Jenison was even able to make a shot-on-goal of their own and Ram keeper Jack Hanssen made a spectacular diving save to frustrate the Wildcats even more. Cole Merrill and Max Dalton added their talent to the field as the game neared the end to keep the Wildcats off the board to close the game 2-0.

“Jenison is a tough team,” shares Ram head coach Stu Quackenbush. “They have a great coach and had a good game plan. We stumbled because of it a few times, so, hats off to them. I’m so proud and thankful that my boys were able to find a way to win. We’ll just keep working, because now we have another game. I’m proud of my team.”

The Rams will now move on to the MHSAA District 2 semifinals, Tuesday, Oct. 15. Rockford will play the winner of the Grand Haven/Grandville match up. The semis will take place at the Hudsonville Athletic Complex, located at 3835 Baldwin St., in Hudsonville. The first game is scheduled for 5 p.m. and the Rams will play at approximately 7 p.m. 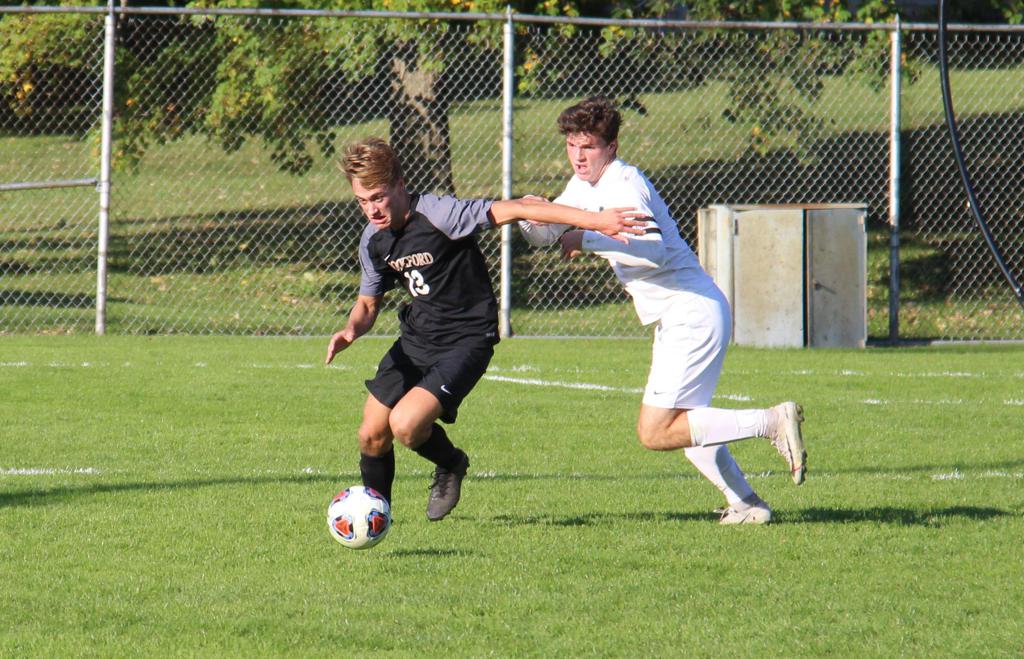 Kyle Switzer works his way down the field in district action. ~ Photo by Jeannie Gregory 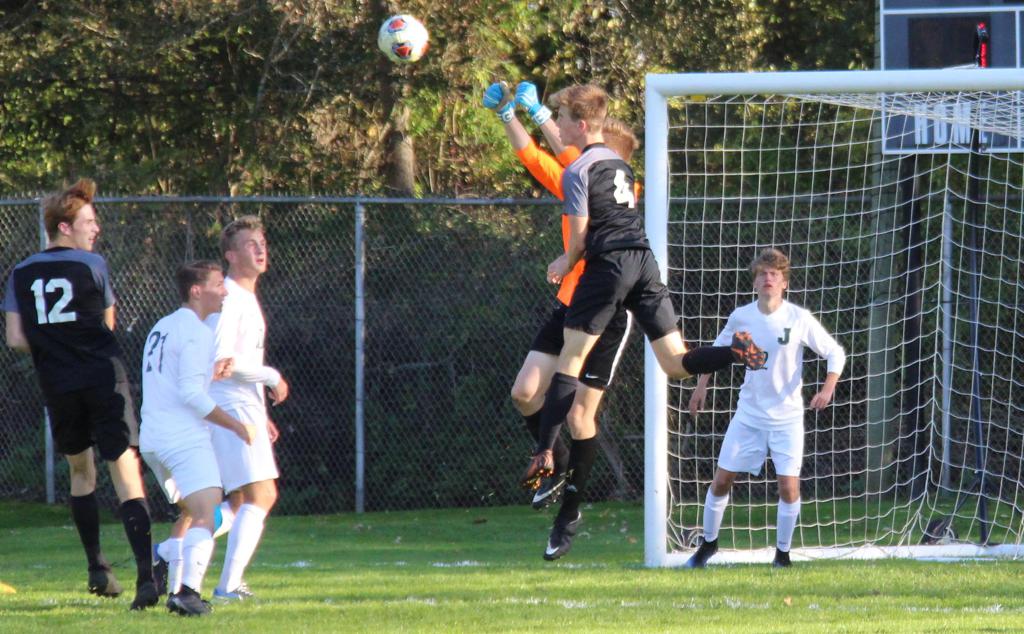 Jack Wildes goes up for the ball at the same time the Jenison goalie does. ~ Photo by Jeannie Gregory 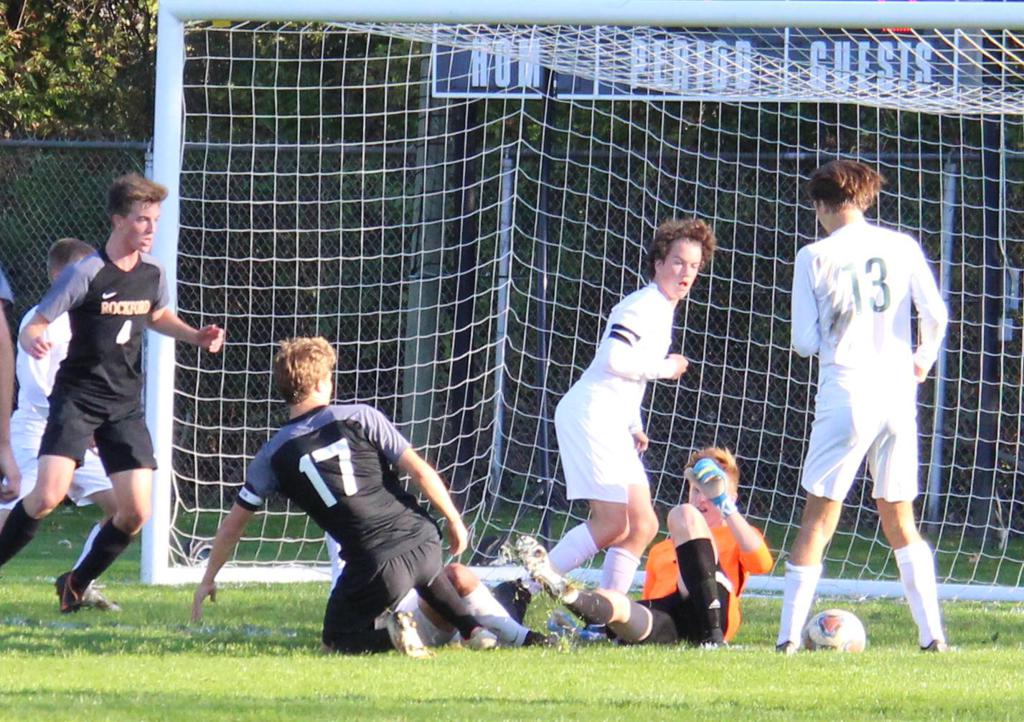 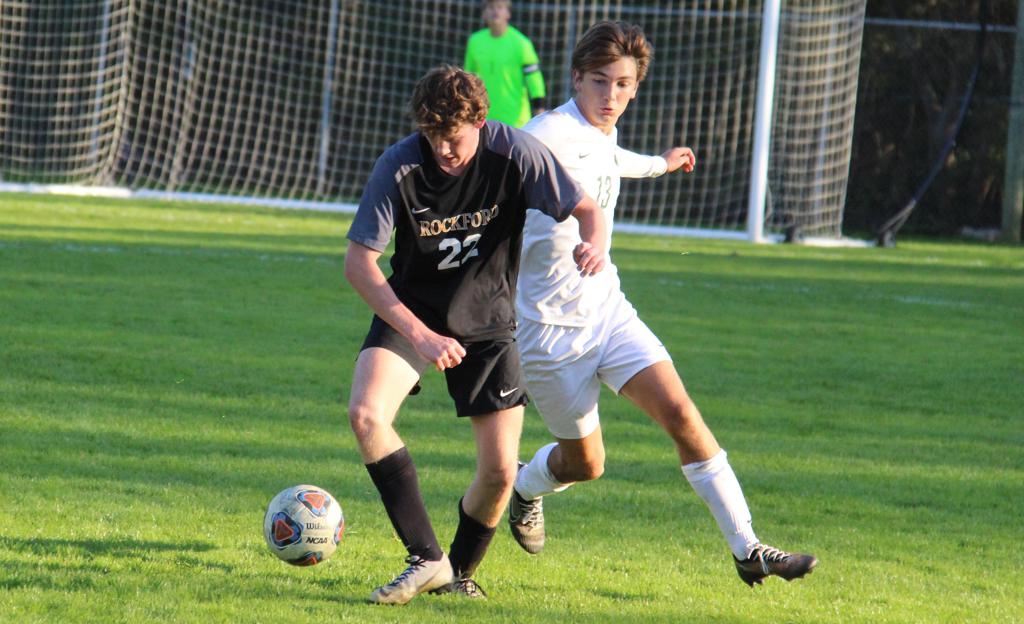 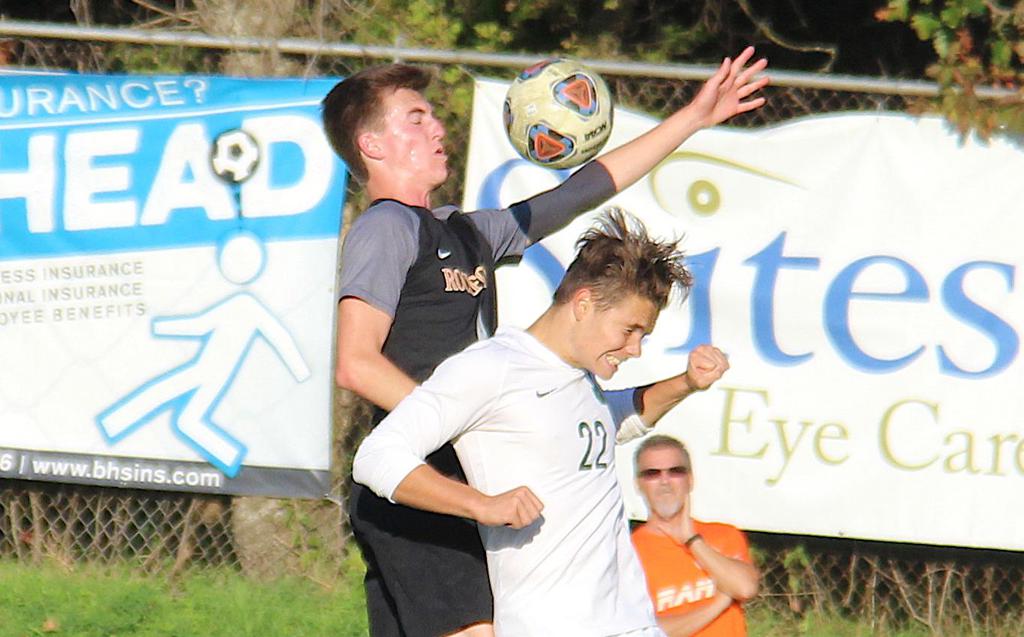 Jack Wildes battles with a Jenison opponent for the ball. ~ Photo by Jeannie Gregory 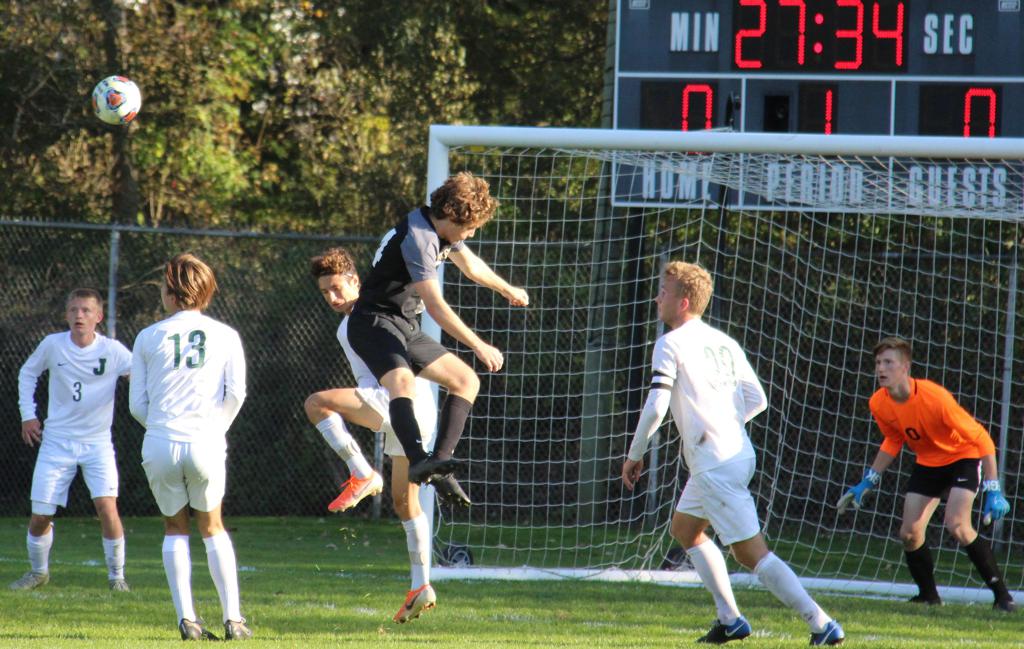 Aidan Smith smashes a header near the goal. ~ Photo by Jeannie Gregory 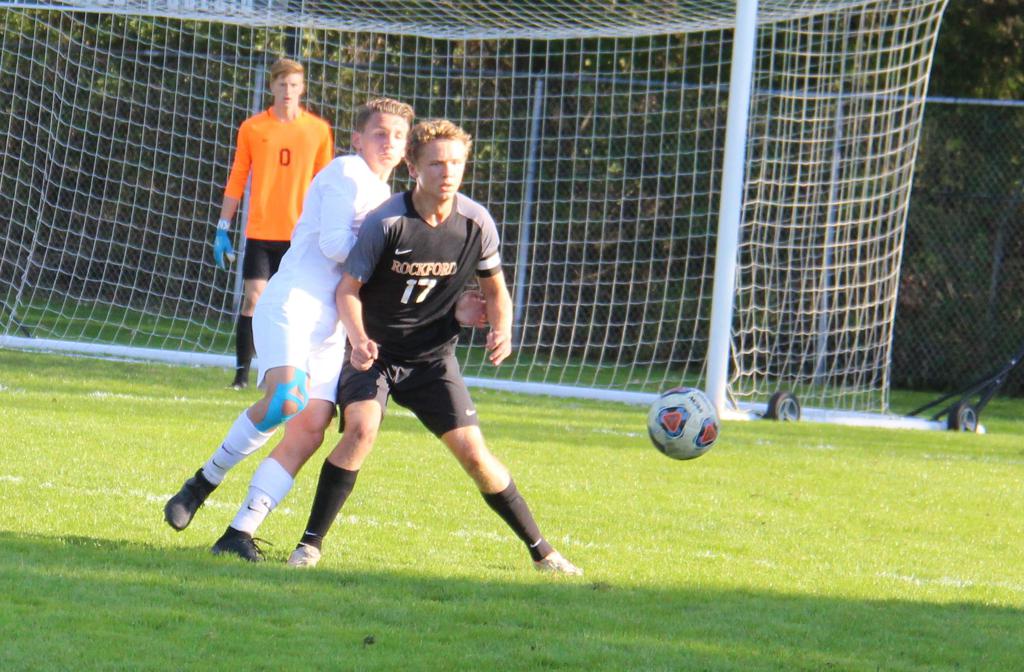 Adam Goushaw positions himself for the pass. ~ Photo by Jeannie Gregory 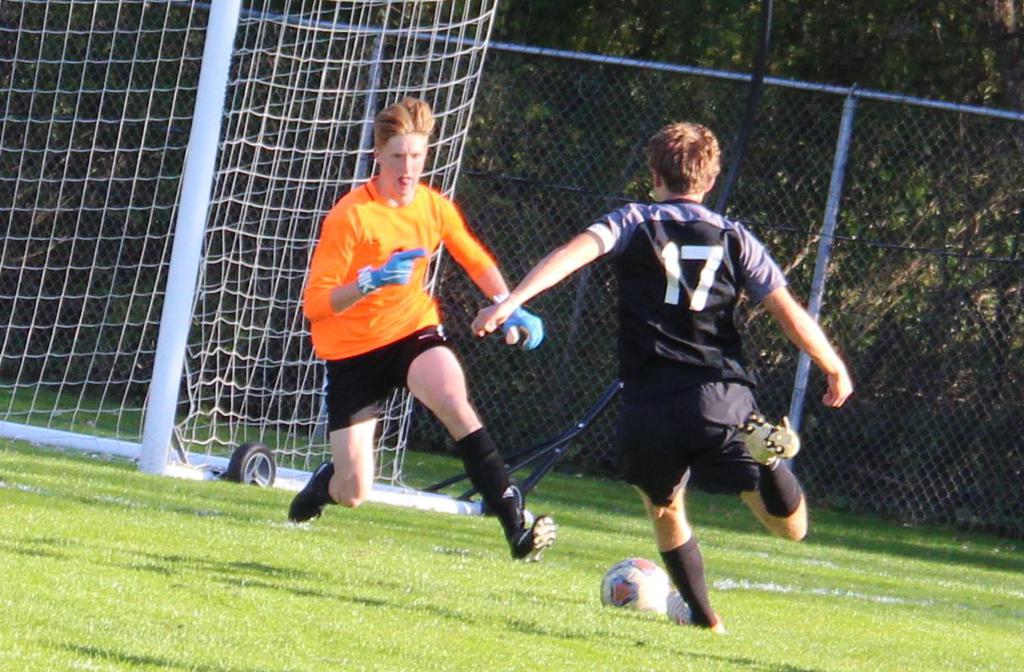 Adam Goushaw shoots for the goal. ~ Photo by Jeannie Gregory 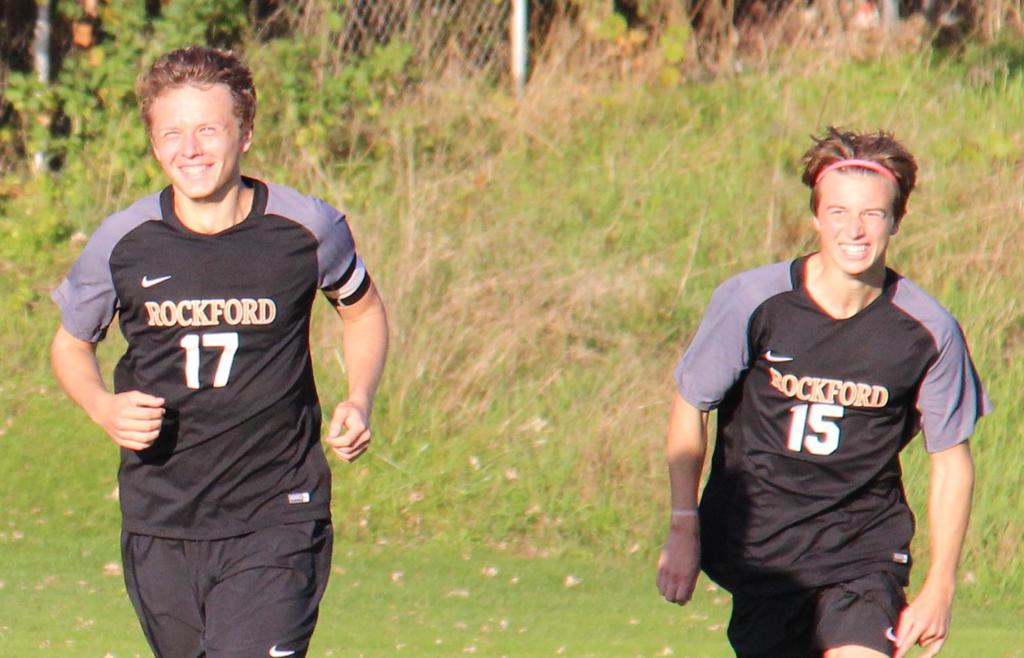 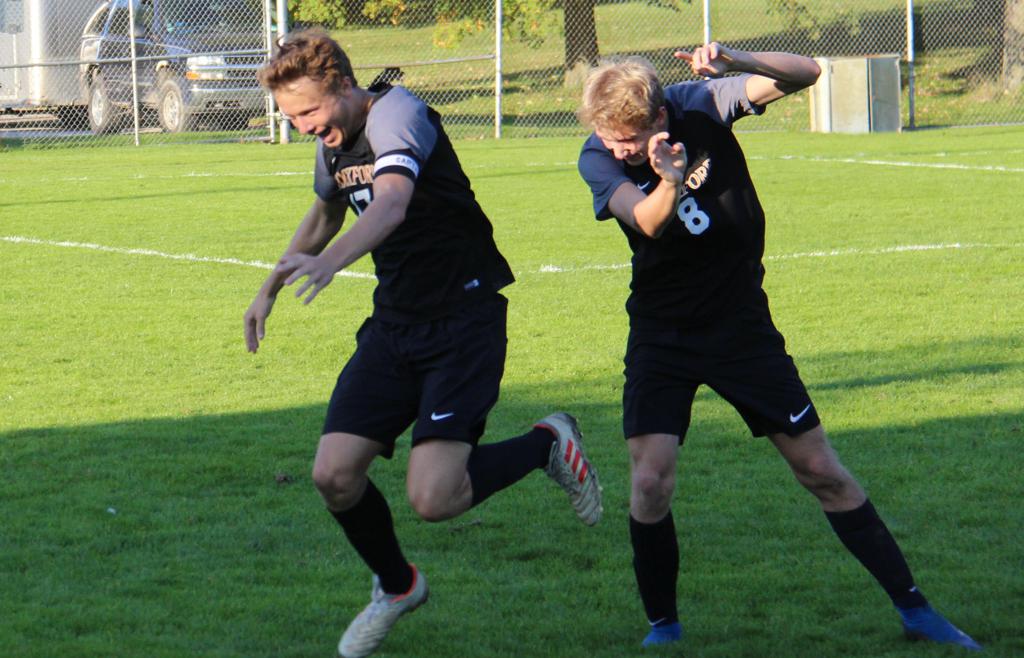 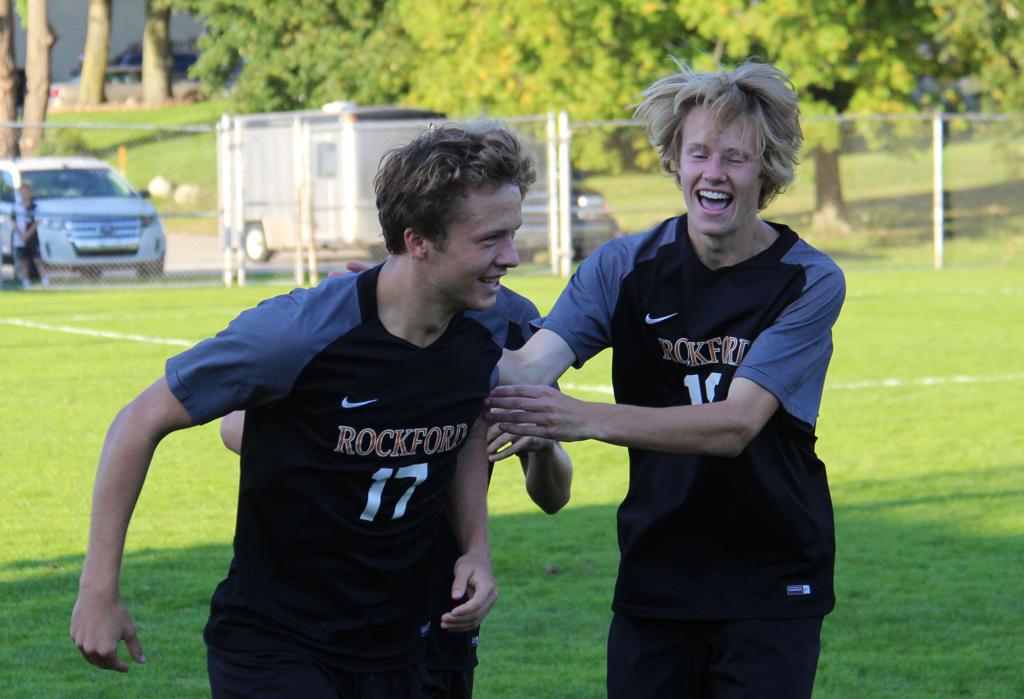