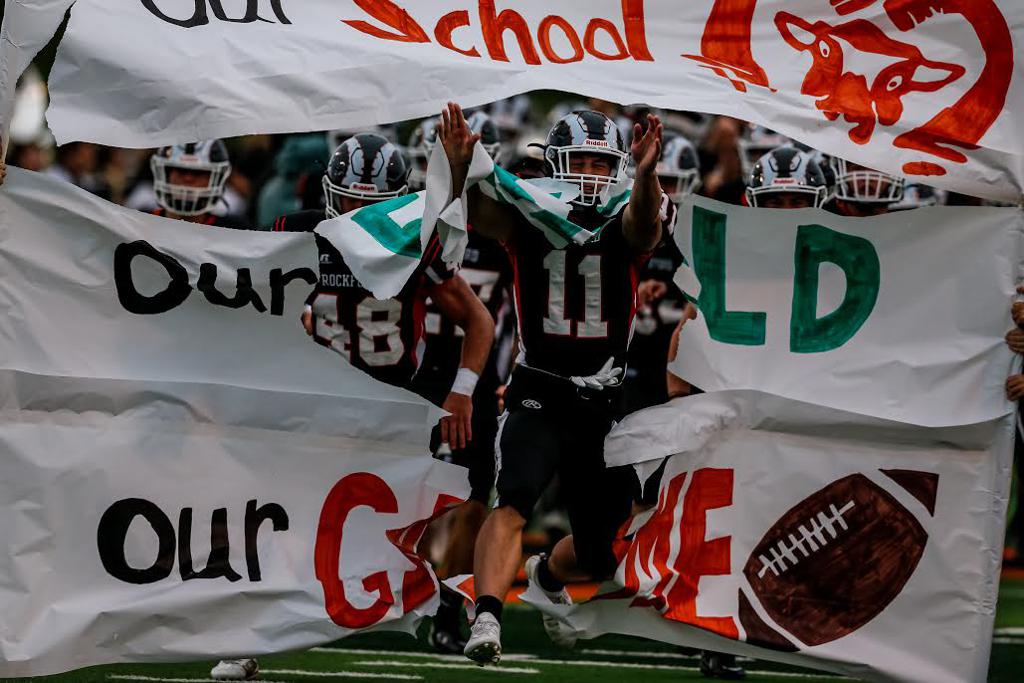 The Rams kick off their game against Hudsonville. Our Field, Our Game. ~ Photo by MIles Postema

Rams move to 4-0 in Conference Play

On a damp, dreary night at Ted Carlson Memorial Stadium on Friday, Oct. 11, Rockford took advantage of five Hudsonville fumbles and another stoic performance from the defense to claim a huge 17-7 win over the Eagles. Both teams entered the fray with 3-0 records in OK Red play and the winner would emerge as the only undefeated squad in the conference with only two weeks remaining in the regular season.

Hudsonville was fresh off of a dominating win over the other main contender in conference play after cruising past Grandville 44-21 the previous week. The Rams, meanwhile, limped into the contest with a pair of less than dominating wins over Grand Haven and Caledonia that left many questioning whether or not they were as good as their undefeated record indicated.

When the dust had settled on the evening it was the Rams who cashed in on their opportunities in the end. Interestingly, every touchdown scored by both teams came after either turnovers or a blocked punt. The longest of those three scoring drives covered a whopping four yards. Both teams allowed occasional offensive drives into their territory, but stiffened whenever their opponent even neared entering the red zone (inside the 20).

"Our kids just played and played and played and played all night long," said Rockford coach Ralph Munger. "This was a game that the team had circled for a long time as an opportunity to win. The weather was certainly going to be a factor tonight and we did an excellent job with ball security in very trying conditions. Brent (Cummings) works with the team on a daily basis and that was a huge key to the win."

The Rams struck first following the first Eagle miscue on their opening drive of the game. Facing a fourth-and-1 at their own 32, Hudsonville trotted out their punt team to give the ball to the Rams. But the snap sailed well over the heads of the twin punters deployed by the Eagles before coming to a rest at their own three before being covered by Rockford.

It wasn't the prettiest drive before converting the touchdown but three plays later Rockford took the lead on a 1-yard plunge from junior quarterback Chris Corey at the 8:38 mark of the opening quarter. Teagen Lenderink added the point after and the Rams had a 7-0 lead. Senior defensive lineman Reid Roberts forced another fumble on the next Eagle possession, but the Rams were unable to turn that into any points as Lenderink sailed a 48-yard field goal attempt wide right in the swirling wind.

Hudsonville got their first and only score of the night following a blocked punt from the Rams that was fallen on at the Rockford four. On the first play following the block, the Eagles covered the four yards to knot things up at 7-7 with 9:52 left in the opening half.  Talented sophomore quarterback Ike Irish did the honors for the Eagles.

The Rams got what ultimately proved to be the decisive points of the contest late in the first half. Senior fullback Jaiden Friesen broke loose for a 47-yard burst up the middle before being stopped at the Hudsonville 12 on a shoestring tackle. Rockford had to settle for a 25-yard Lenderink field goal that made it a 10-7 game with only 2:15 left in the opening half. The 53-yard drive was the only scoring drive of the evening that covered more than the aforementioned four yards. Rockford also had a TD called back on a holding penalty that negated a bruising run after a screen pass to Friesen and kept the score at 10-7 Rockford at the half.

The Rams extended the lead to 10 midway through the second quarter when an errant snap squirted though the quarterback's hands before being covered by senior defensive lineman Logan Wert at the Eagle three. The Rams again were meticulous before converting the fumble into points as Friesen powered in from the 1-yard line on the third play of the drive. Lenderink's extra point made it a 17-7 game with 5:27 left in the third quarter. That was it in the scoring column for the night as neither team made it past the opposition 20 despite occasional forays into enemy territory.

"I want to make sure that we give credit to Hudsonville tonight, too," said Munger. "They are a very talented team and it took a great effort on our part to come out on top. It was a difficult night for both teams in this weather but being from the North we are all accustomed to days like this."

Friesen led the Ram rushing attack with 95 yards on 21 carries while junior running back Jacob Vega added 18 on six attempts. Corey was 8 for 16 passing for 57 yards on a night where the weather wasn't conducive to an aerial attack. Senior wide receiver Eli Haddad led the receiving corps with four catches for 24 yards while Friesen added 2 receptions for five yards. The Ram tight ends also got into the act as junior Brock Holwerda had a single catch for 12 yards and fellow junior Isaac Toole hauled in a circus catch for 16 yards while lying almost prone and keeping alive a late Ram drive that burned valuable minutes off the clock. As a team Rockford totaled 178 yards for the contest. Irish, Hudsonville’s quarterback, had one of the more interesting stat lines you will ever see for Hudsonville as he rushed for a positive yardage of 205 yards amidst his 29 carries. But interspersed with the positive yardage was a negative rushing total of -85 yards that gave him a net of 120 yards. Rockford denied pretty much everything that Hudsonville threw at them and held them to a total of 133 yards on the day.

Senior linebacker Reid Nicholson led the Rockford defense with 10 tackles while junior linebackers Cole Gleason and Ben Tadych added seven and six, respectively. Junior safety Andrew Lanham also chipped in with five tackles and a key pass deflection late in the opening half on a Hail Mary attempt from Hudsonville. Jake McLean and Aidan Crosby also were credited with fumble recoveries for Rockford.

Rockford now stands at 7-0 on the season and a perfect 4-0 in OK Red play. They will make their final road trip of the regular season next Friday, Oct. 18 when they journey to Grandville to take on the Bulldogs. Grandville is 3-1 in league play and 6-1 overall and will be looking to procure no worse than a share of the league lead if they were to topple Rockford next week. Kickoff is slated for 4:30 p.m. 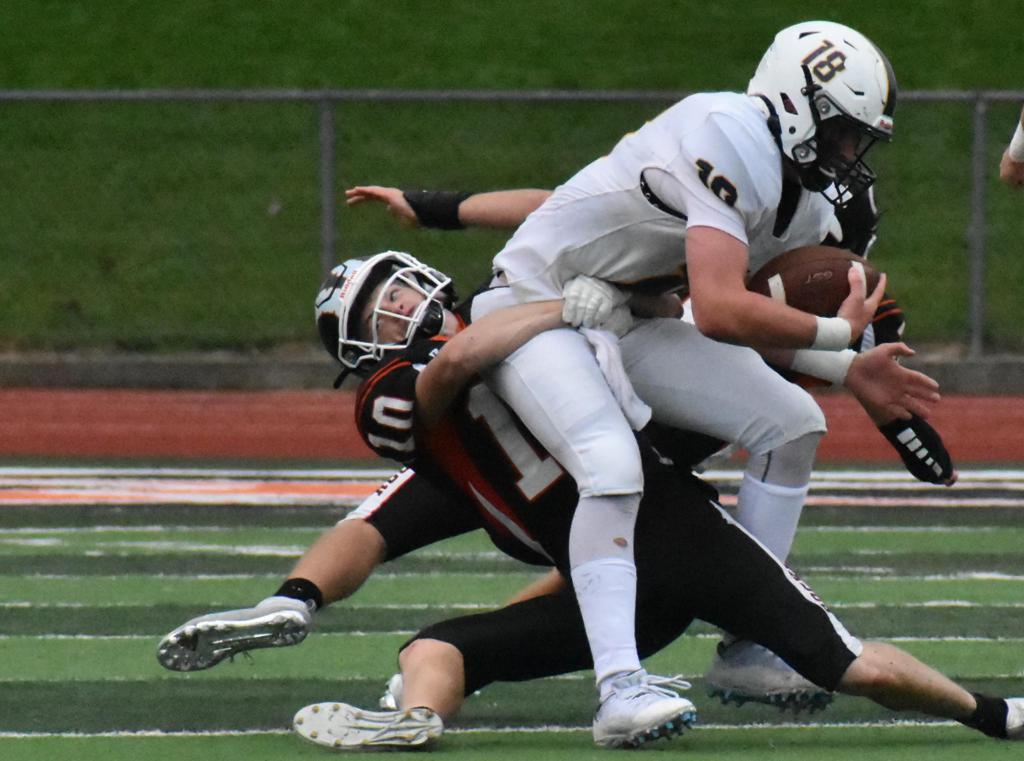 Andrew Lanham brings down an Eagle. ~ Photo by Connie Hill 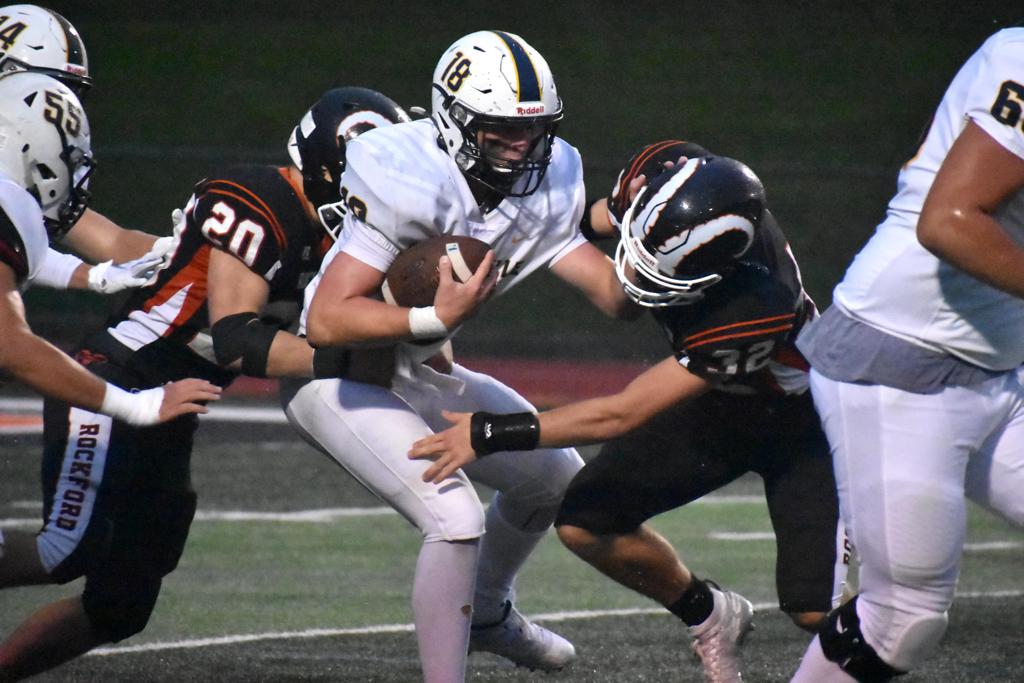 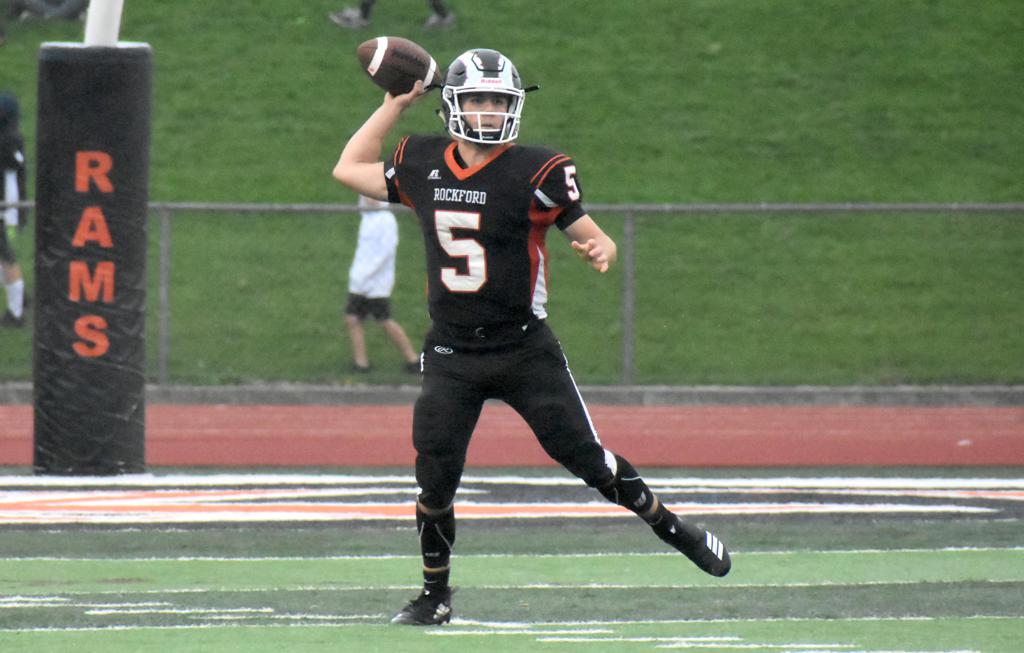 Quarterback Chris Corey drops back for a pass. ~ Photo by Connie Hill 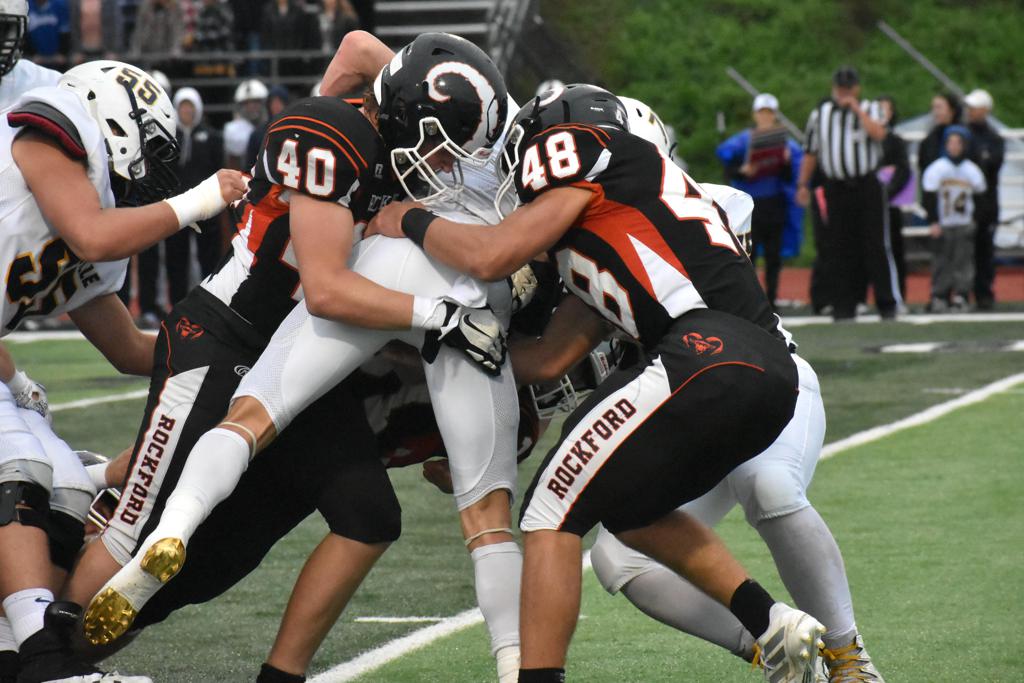 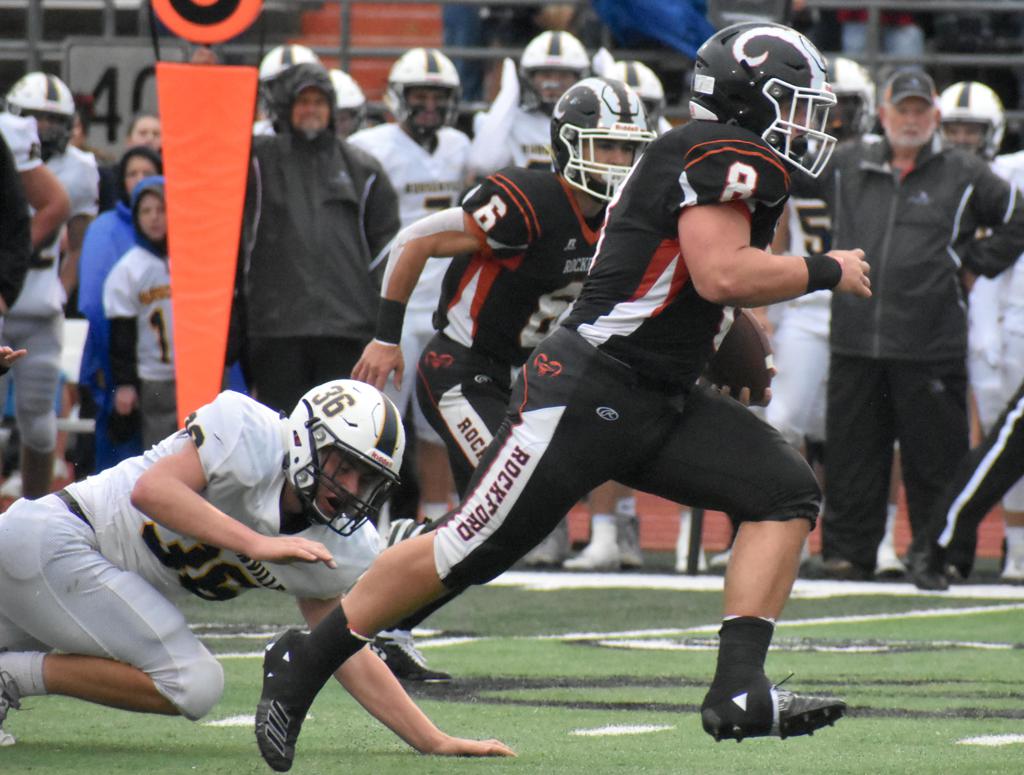 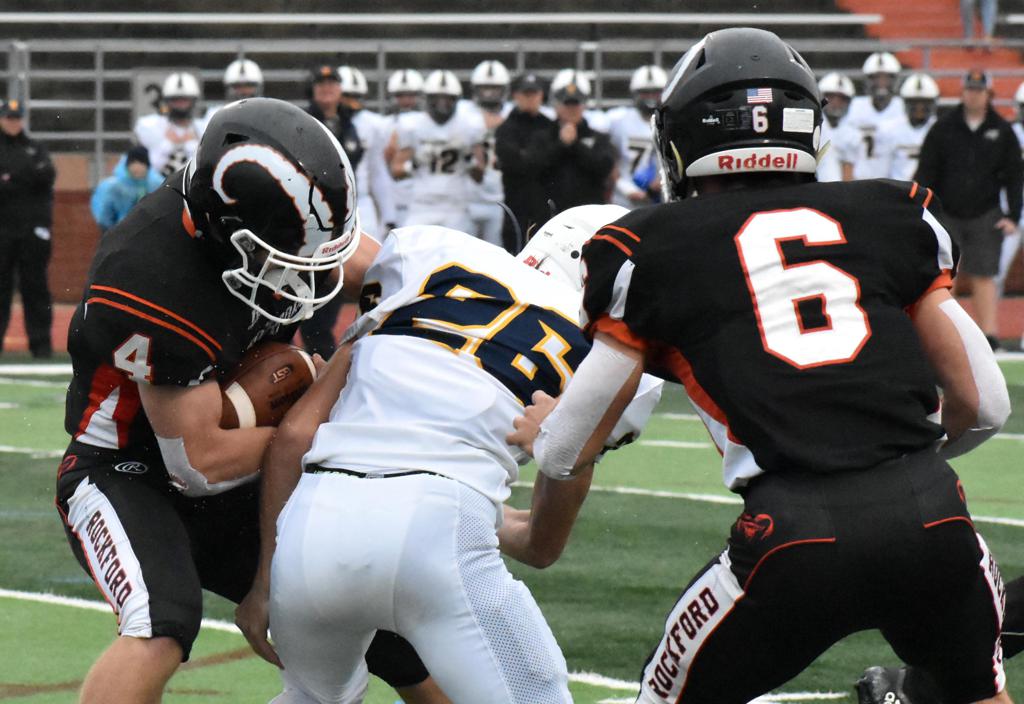 Luke McLean carries the ball for the Rams. ~ Photo by Connie Hill 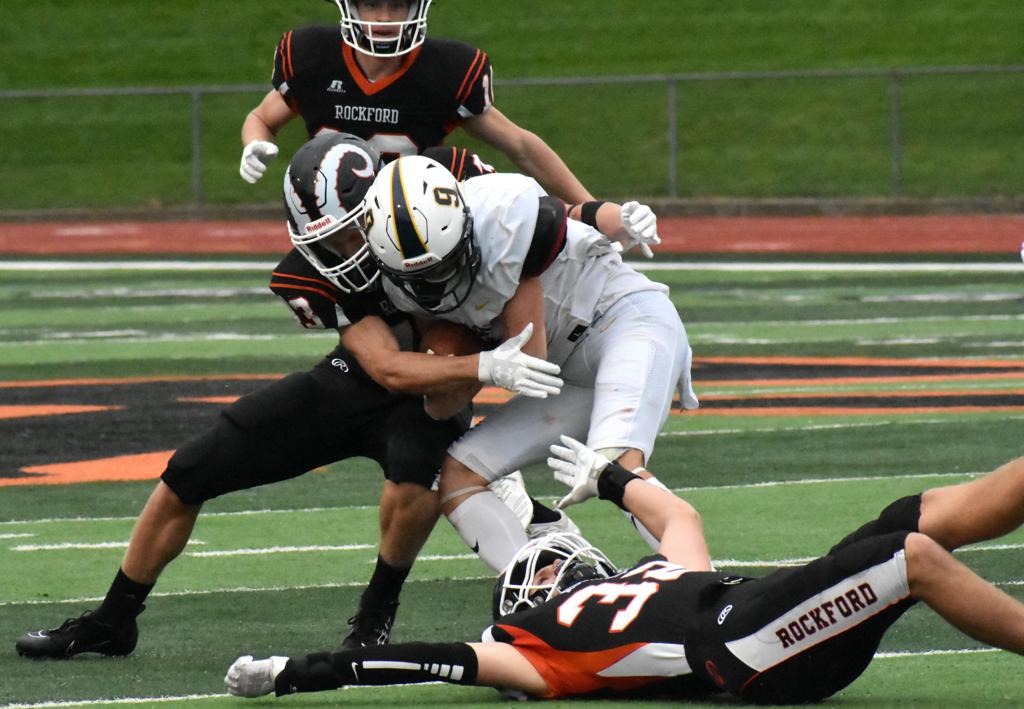 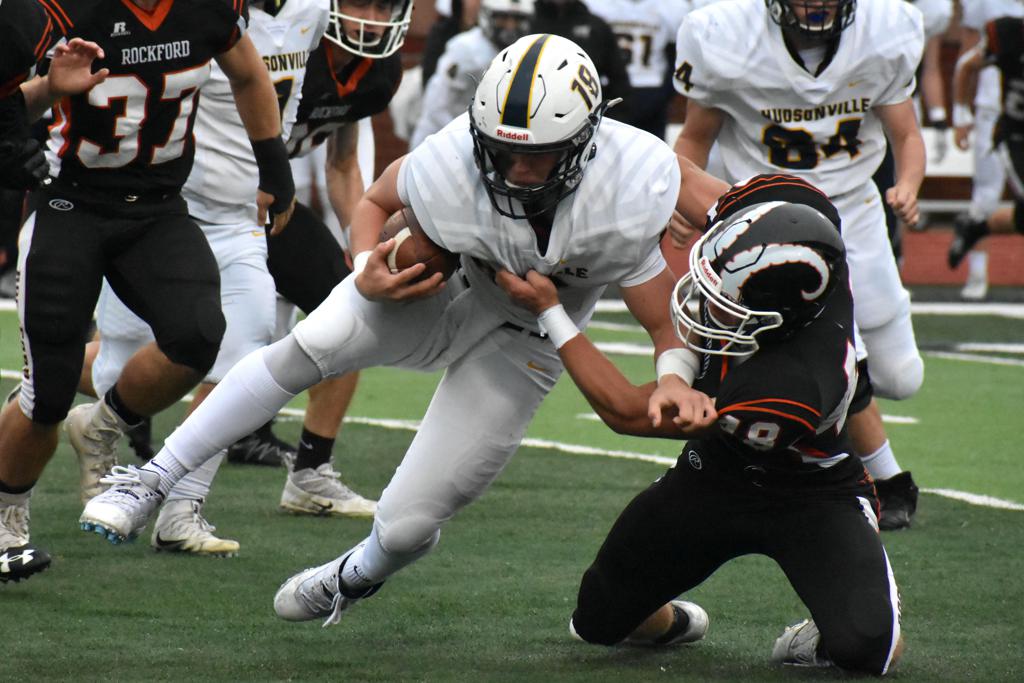 Reid Nicholson with another Ram tackle. ~ Photo by Connie Hill 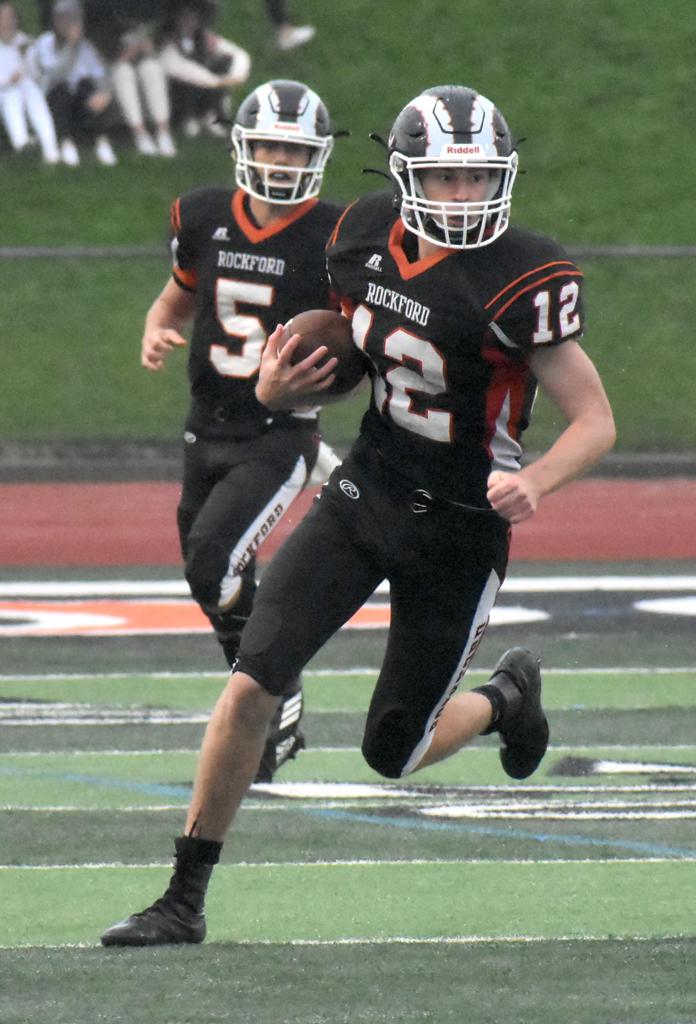 Brock Holwerda carries the ball for the Rams. ~ Photo by Connie Hill 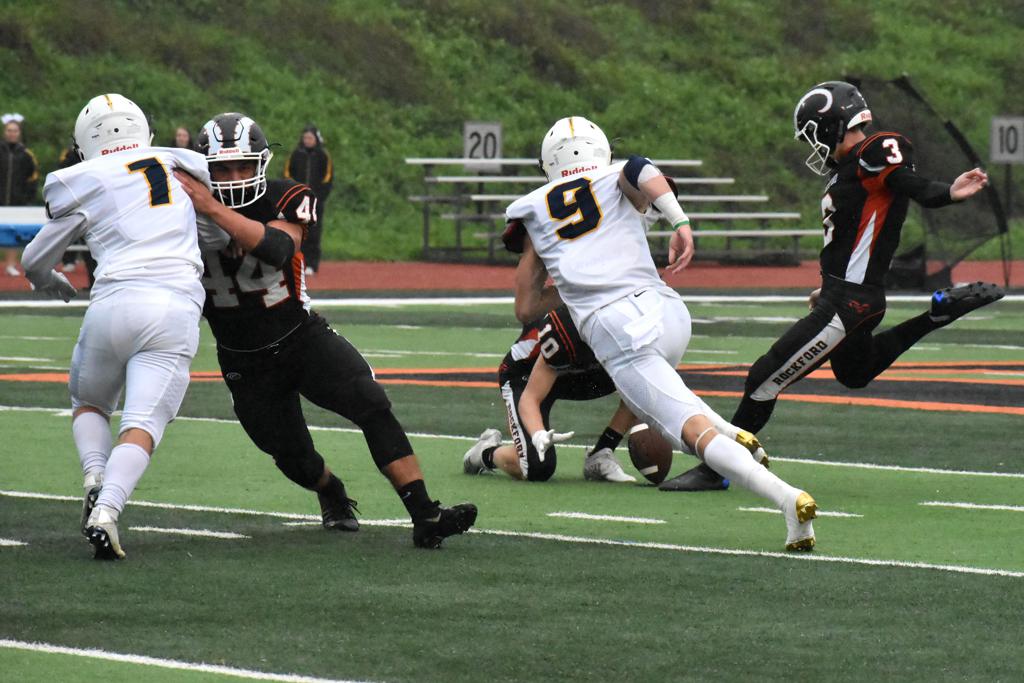