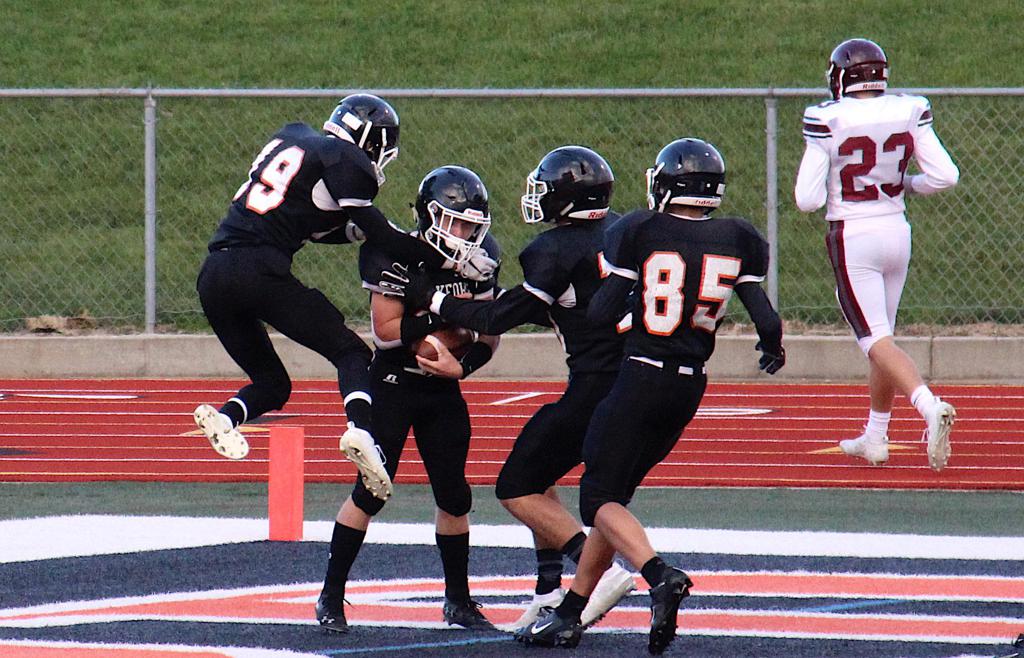 The Rams celebrate with Luke McLean after he scores on a 90-yard kick off return in the opening seconds of the game against Grandville. ~ Photo by Jeannie Gregory

Rams move record to 8-0 on the season

ROCKFORD – The Rams JV football team played host to the Grandville Bulldogs, Thursday, Oct. 17, and came away with an impressive 28-6 victory. The win moves the team’s overall record to 8-0 on the season and 6-0 in the OK Red Conference. The running clock in the second half had the game move quickly, as did a kick off that came almost immediately after the freshman teams cleared the field.

Ram Luke McLean reeled in the kick off at the 10, enjoyed some impressive Ram blocking, and then promptly ran down the right sideline to pay dirt. Just 12 seconds had ticked off the clock and the return had both the Grandville players and fans reeling. Dolan Harmsen trotted out for the PAT and split the uprights to move the score to 7-0. The clock read 9:48.

The Dawgs received the Harmsen kick off and on their first play from scrimmage looked like they were going to answer immediately on first-and-10 at their own 35. They sent a rush up the middle, with only Caden Hyink standing between the runner and a potential score. Hyink came up with a huge play pulling the runner down at the 48 to stop the threat. The Ram defense worked hard to slow the Bulldogs down, with Kade Kostus, Leo VanderWiel and Camden Whyte contributing tackles to frustrate the Grandville runners. The Dawgs still strung together enough plays to work their way down to the Ram 20. Sam Watts had a huge play, sacking the quarterback for lost yardage. After the play, Grandville was looking at a second-and-19 at the 29. They were stymied on third down by Derrik Schuring who rushed the quarterback and Grandville stared at a fourth-and-17 at the 27. Unfortunately for the Rams, the Bulldog quarterback connected for a touchdown pass to move the score to 7-6. The Dawgs went for two and were stopped by the Rams to keep the one-point lead. That would be the only score for Grandville for the game as the Rams suffocated their offense the rest of the night.

On the next series, the Rams worked the ball to the Grandville 42, but a personal foul moved them back to stare at a third-and-13 at their own 48. Quarterback Zak Ahern carried the ball for four yards to the Grandville 48. On fourth-and-nine Ahern dropped back and sent a perfect punt that Watts downed at the Grandville 3-yard line. Grandville couldn’t move the ball past their own 11 and a wobble punt had the Rams with excellent field position at the Grandville 29. Gabe Spees and Andrew Griffin moved the ball to the 22 on rushes and then Ahern air-mailed it to Elliott Young, who was tackled at the two for a 20-yard pass play. Spees carried the ball over the goal line on the next play to move the score to 13-6 with 7:22 left in the quarter. A wayward snap kept the scoreboard the same.

The Dawgs would turn the ball over to the Rams after a Leo VanderWiel QB sack causing Grandville to punt. The Rams worked their way down the field from their own 40 on a number of rushes from McLean and Griffin and a pass to Jonathan Maat that found him at the 1-yard line. Spees did the honors of carrying the ball into the end zone to move the score to 19-6. The Rams went for a two-point conversion and Ahern rolled to the left and turned the corner and hit the pylon for the points to move the score to 21-6.

The second half only saw one score – and that was from the Rams in the fourth quarter. The Rams stopped Grandville on fourth down and got the ball on their own 37. Rockford was looking at a fourth-and-four at the Grandville 30 when Grandville rushed Ahern breaking up the play and Ahern deftly tossed the ball back to a surprised Cooper Nairy, who ran the ball to the 4-yard line. McLean ran the ball into the end zone on the next play to move the score to 27-6. Harmsen kicked a successful PAT and the score moved to 28-6. An interception by Whyte on the next Grandville offensive series stopped all hopes of another Bulldog score, with Jordan Fortuna carrying the ball for the Rams a number of times as the clock wound down.

The Rams will play their final game of the season against East Kentwood on the road, Thursday, Oct. 24. Kickoff is scheduled for 6:30 p.m. 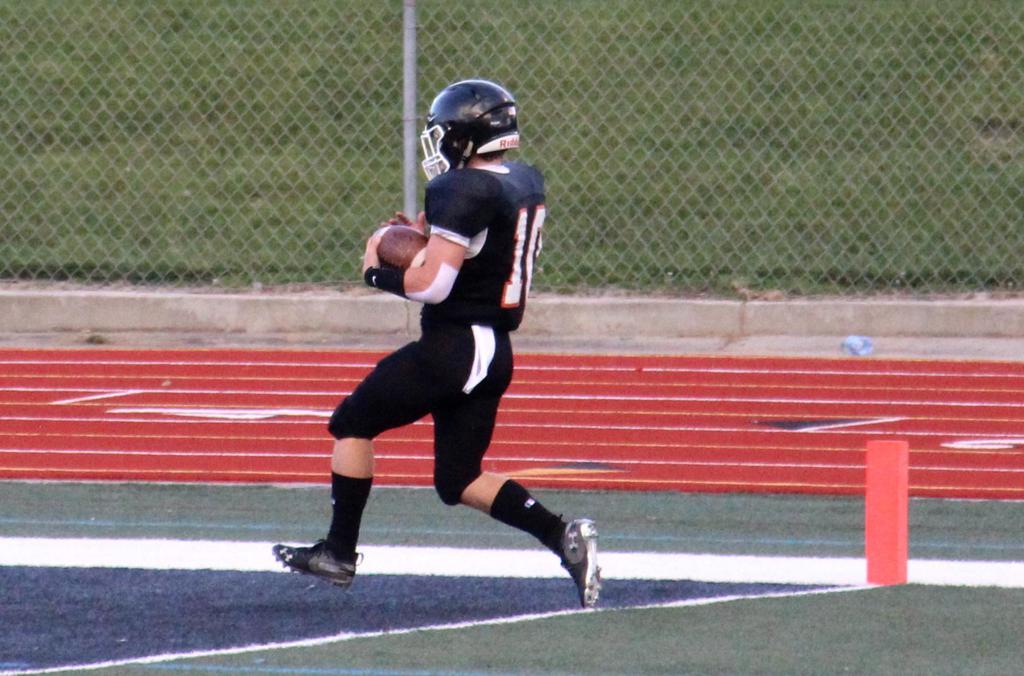 Luke McLean crosses the goal line on a 90-yard kick off return. ~ Photo by Jeannie Gregory 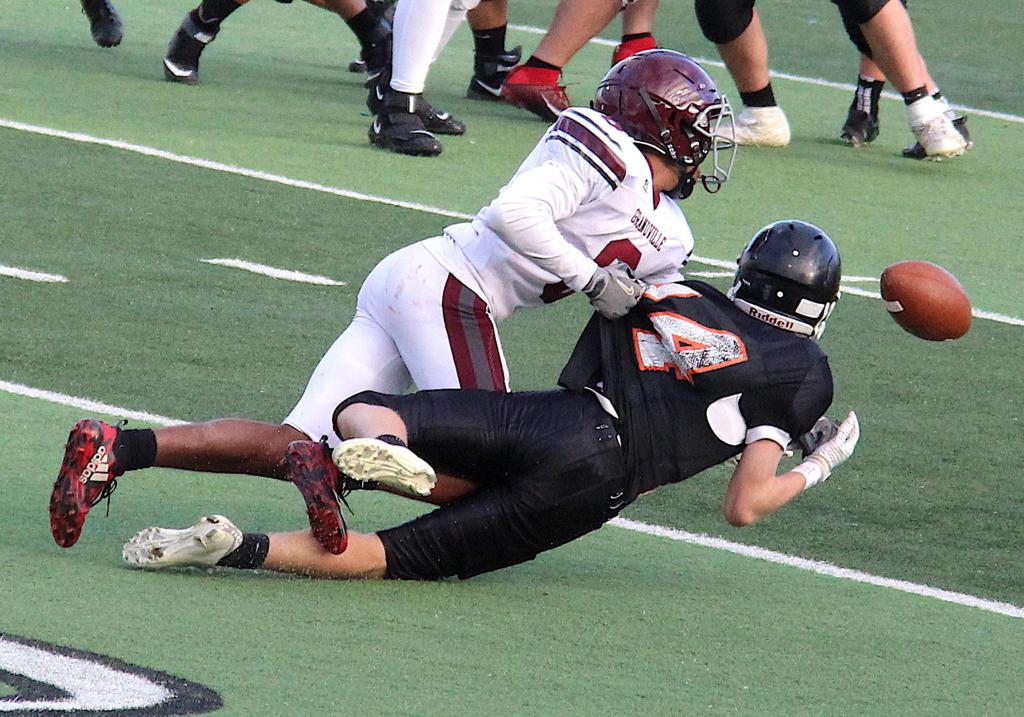 Jonathan Maat dives for the ball with a Grandville player doing his best to stop him. ~ Photo by Jeannie Gregory 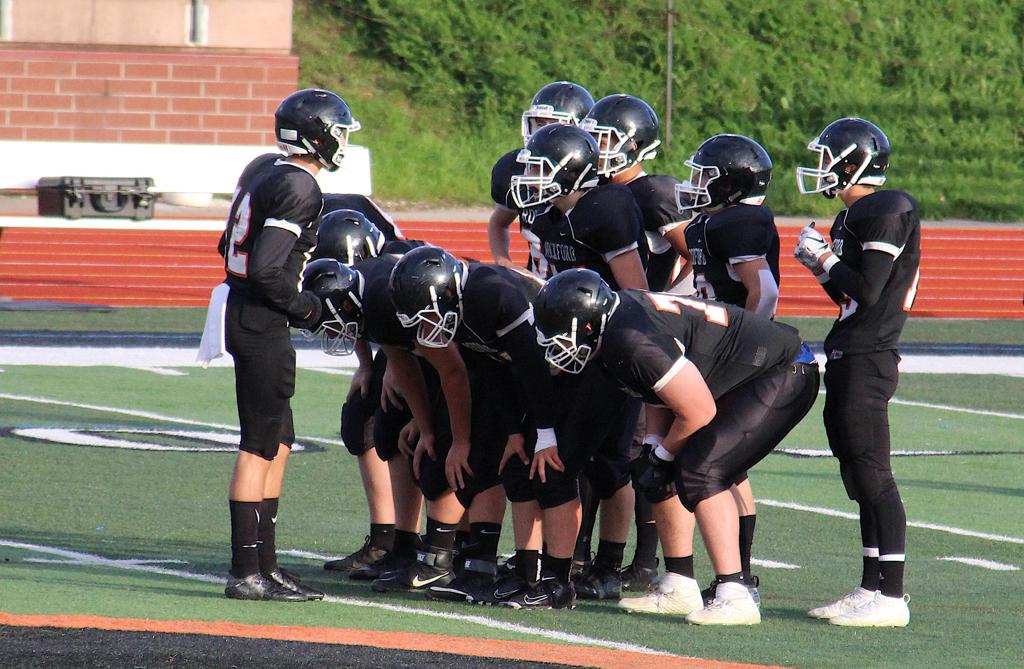 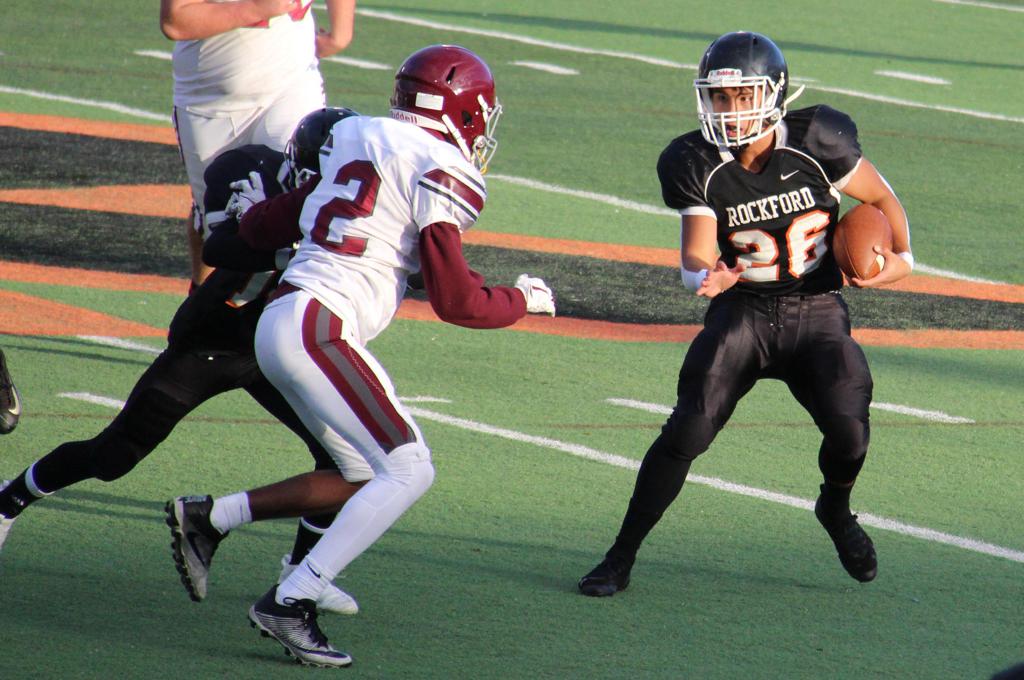 Gabe Spees eyes a Grandville defensive player as he carries the ball for the Rams. ~ Photo by Jeannie Gregory 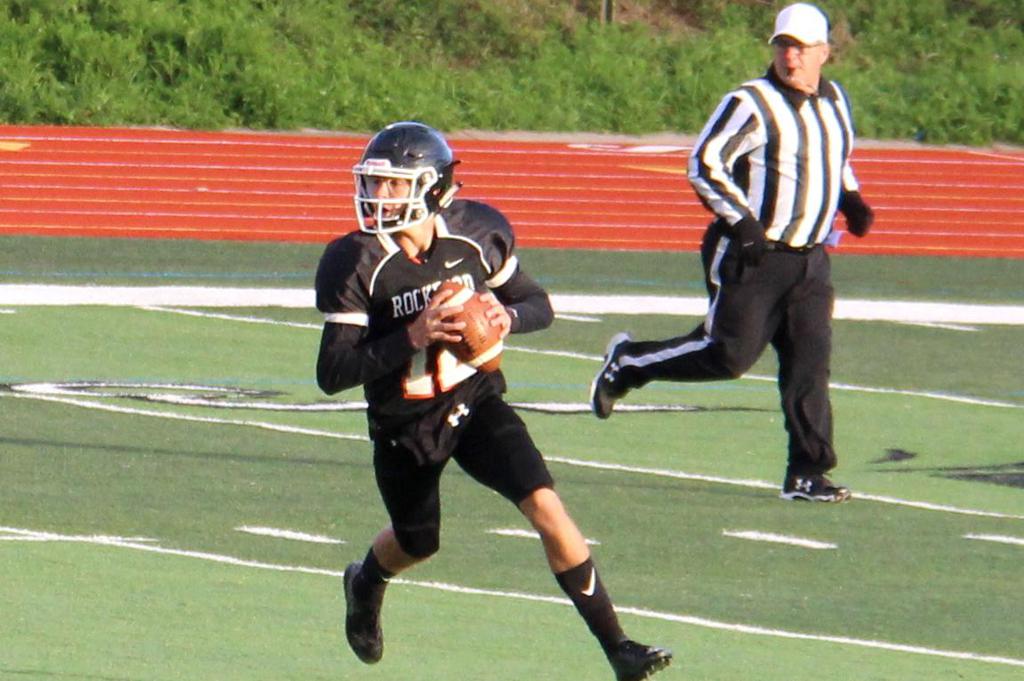 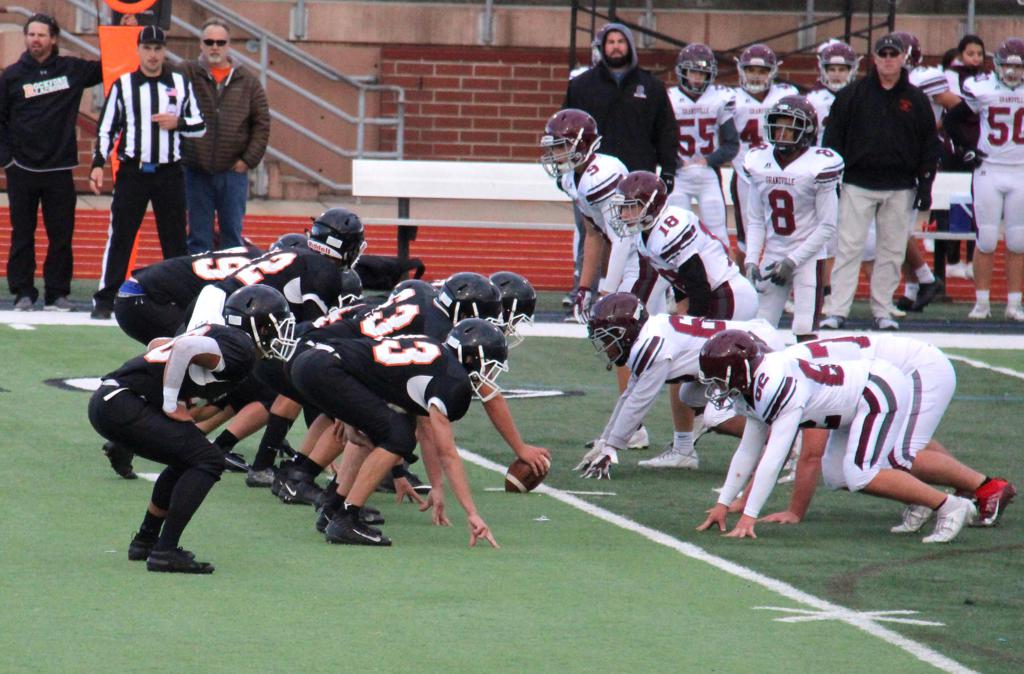 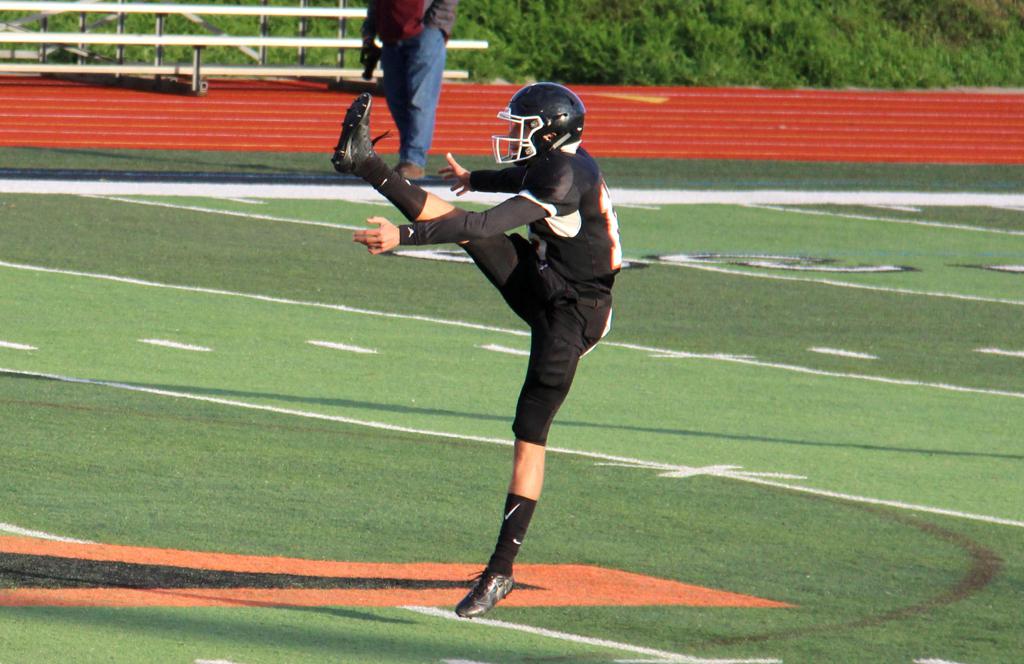 Zak Ahern punts the ball for the Rams. ~ Photo by Jeannie Gregory 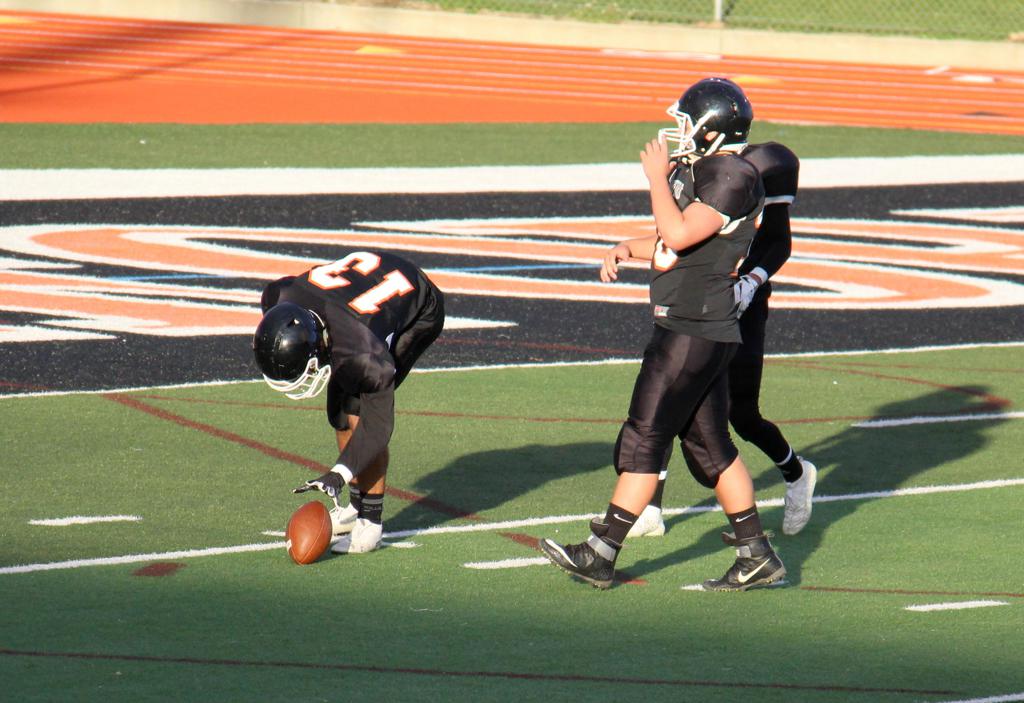 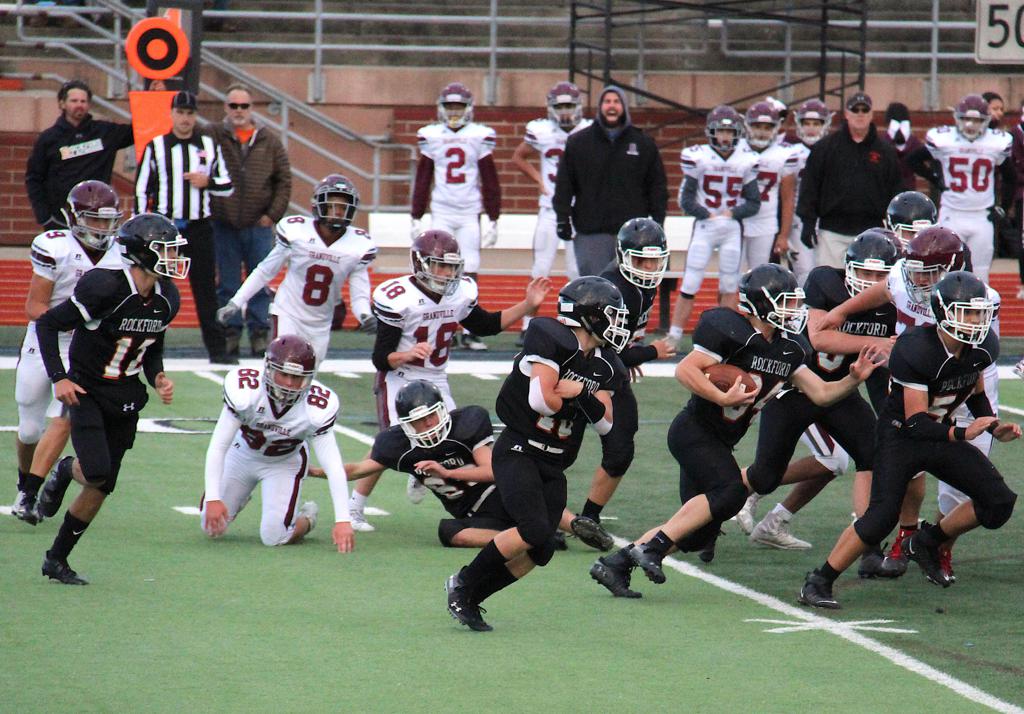 Andrew Griffin carries the ball through the Grandville defenders. ~ Photo by Jeannie Gregory