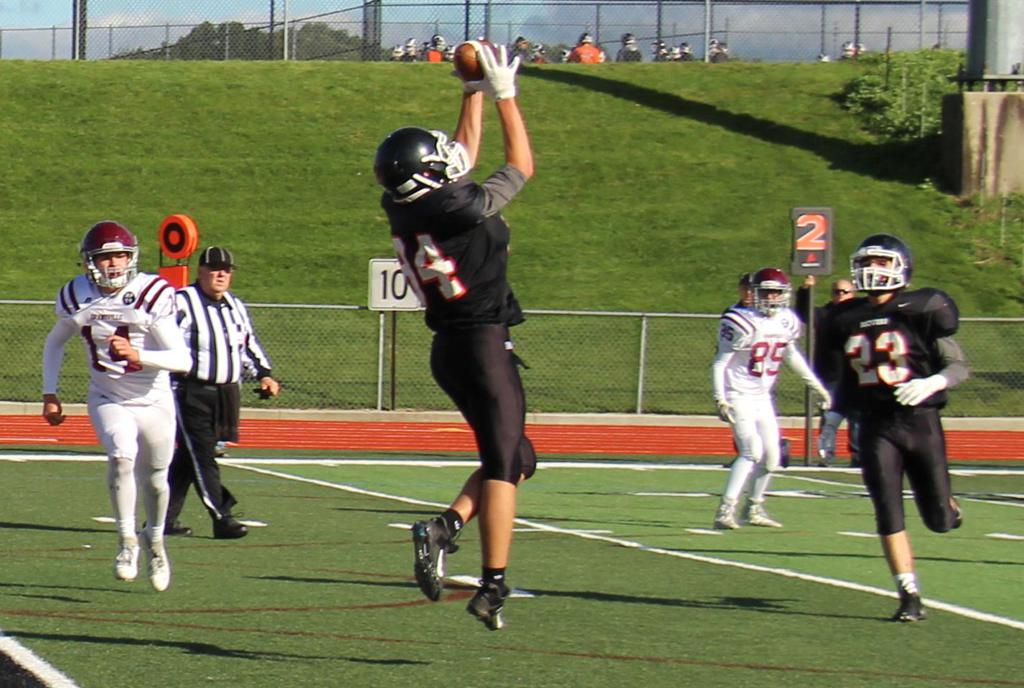 Seth Evans goes up for the ball and carries the ball for a Ram score. ~ Photo by Jeannie Gregory

ROCKFORD – It was a great moment in Ram frosh football history. The Rams were playing Grandville and were sitting on a comfortable 22-8 lead with just 1:20 left in the game. The Bulldogs had worked their way down the field and were looking at a first-and-10 at the Ram 20. The Bulldog quarterback dropped back and passed the ball and Ram defensive back Brody Thompson intercepted the ball at the Rockford 4-yard line and blazed down the field for a 96-yard touchdown to put an exclamation point on a 29-8 Ram win. It was a defining moment for a team that now stands at 7-0-1 on the season, with just one more game to play in their 2019 campaign.

The Rams left little doubt as to who the eventual winner would be after moving easily down the field on their first series after the kick off found them at their own 35. Rushes from Rick Beison and Noah Lepzinski moved the ball down the field and the Rams were looking at a second-and-six at the 11 when quarterback Mac VandenHout connected in the air to Seth Evans for the first Ram touchdown. Jackson Burkholder’s PAT was good and it was 7-0, Rams, with 6:08 left in the quarter.

Grandville was stymied on offense in their series, despite a few successful pass plays, with Ram defensive back Austin Harvey stepping up on defense twice in a row with two huge plays that registered a sack and another that stopped the Bulldogs on fourth down. The Rams got the ball back but suffered a fumble that the Dawgs recovered. The Ram defense came up big, again, when they stopped Grandville on a fourth-and-three on the Ram 11 to get the ball back. The clock ticked down to the end of the first quarter with the Rams still holding the 7-0 lead. The pressure was on as the Rams tried to work away from the goal line, but a pick had the Dawgs sitting on a first-and-10 at the 14 yard-line. On the first play from scrimmage the Dawgs ball carrier crossed the goal line to move the score to 7-6, and a successful 2-point conversion had Grandville holding on to an 8-7 lead.

Rockford answered on their next series and the defense never gave up another point to assure the Ram victory. The Rams started at their own 35 and utilized a ground and air attack to move the ball down the field. Jack Hodsdon carried the ball plenty to get Rockford down the field and passes to Evans and Beison had the Rams knocking at the door. At second-and-one at the three, Lepzinski carried the ball over the goal line to move the score to 13-8. The PAT was successful and the Rams held the 14-8 lead going into the half.

The second half sped by with 10-minute quarters and a running clock that had time speeding by. Grandville received the kick off, but couldn’t move the ball past the 50-yard line even though the started at the 38. Tackles by Thys Segard, Harvey and Jackson Buchanon on Dawg rushes slowed down the Grandville offense. Grandville turned to the air and were broken up by Thompson and Joseph Pitsch to cause a Grandville punt. The Rams found themselves at their own 13-yard line with just 4:00 left in the third quarter. Rushes by Beison, Lepzinski, and Hodsdon found the Rams at the Grandville 1-yard line. VandenHout broke in with a quarterback keeper to move the score to 20-8. A 2-point conversion pass from VandenHout to Colby Weston lit the scoreboard 22-8.

That score set the stage for Grandville’s final series and Thompson’s heroic interception to end the game 29-8 after the successful Ram PAT.

The Rams will travel to East Kentwood for their final game of the 2019 season, Thursday, Oct. 24. Game time is still tentative. 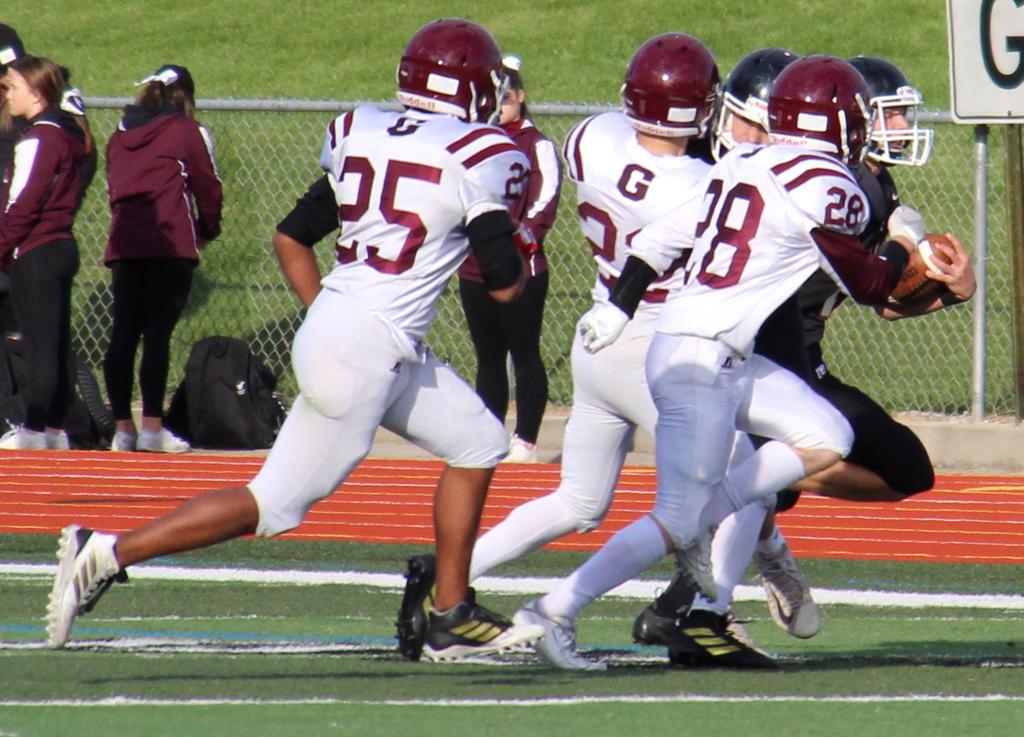 Brody Thompson breaks through a pack of Bulldogs on his way to the end zone. ~ Photo by Jeannie Gregory 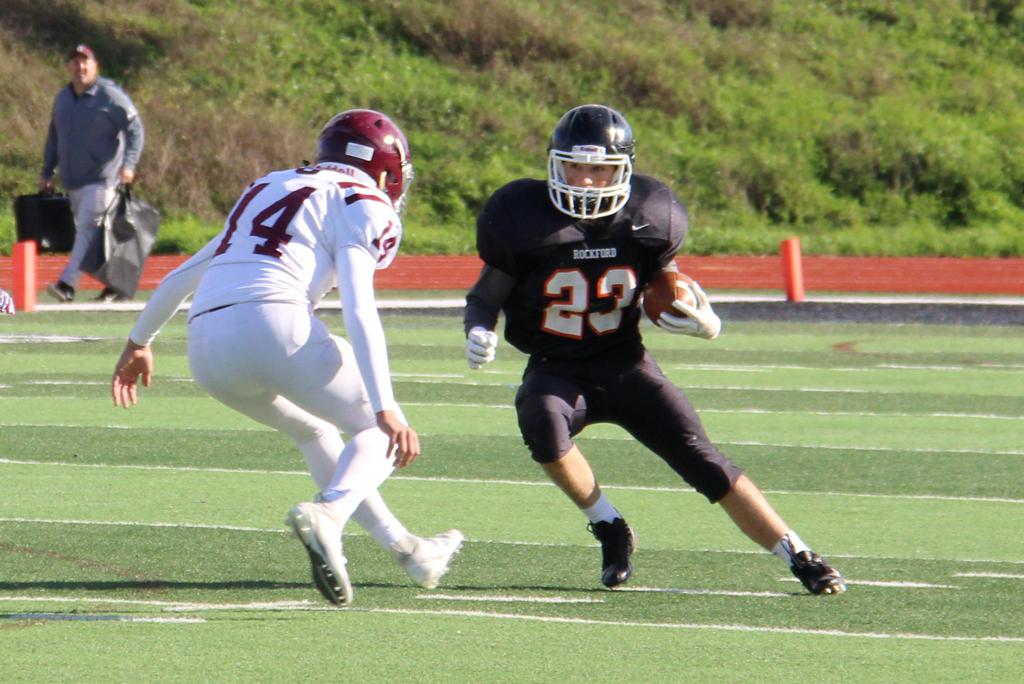 Noah Lepzinski carries the ball for the Rams. ~ Photo by Jeannie Gregory 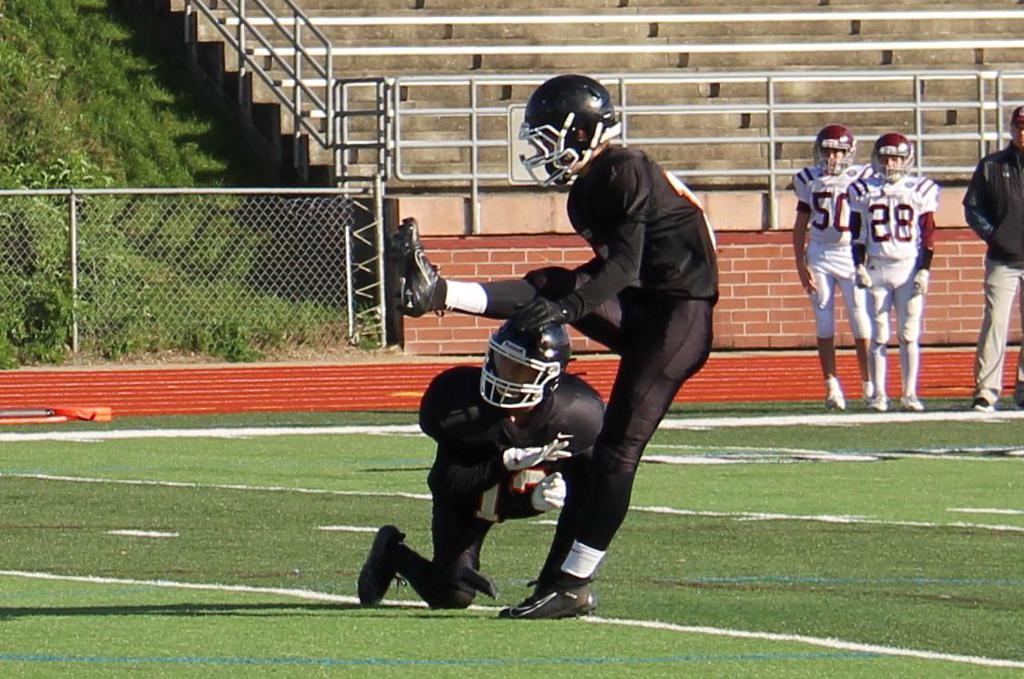 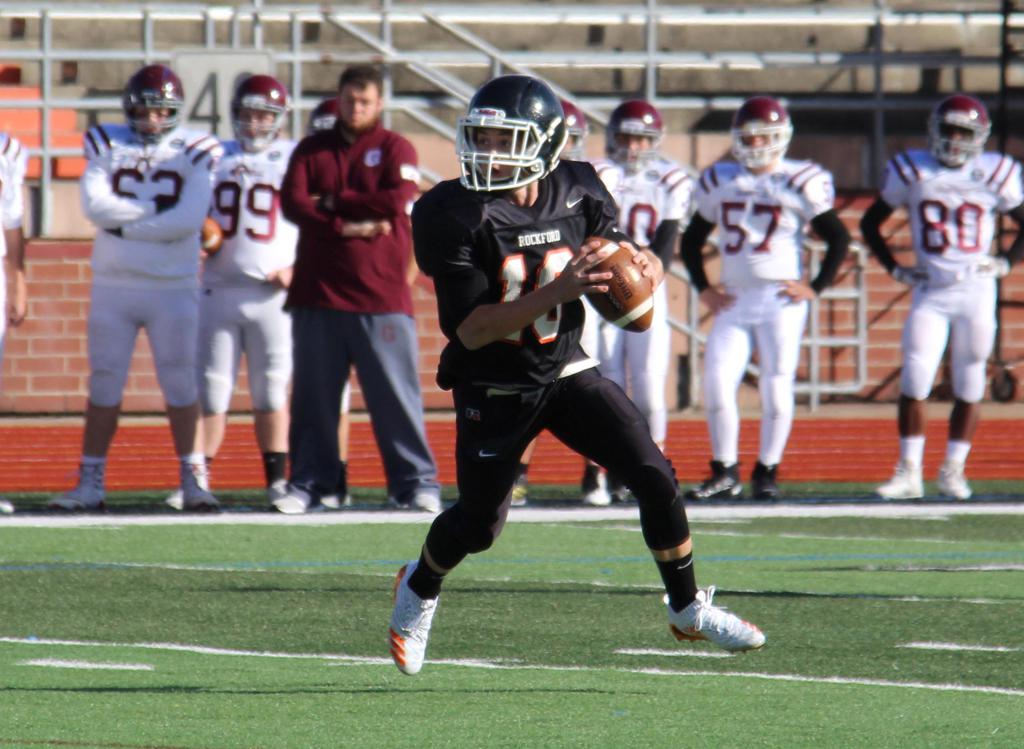 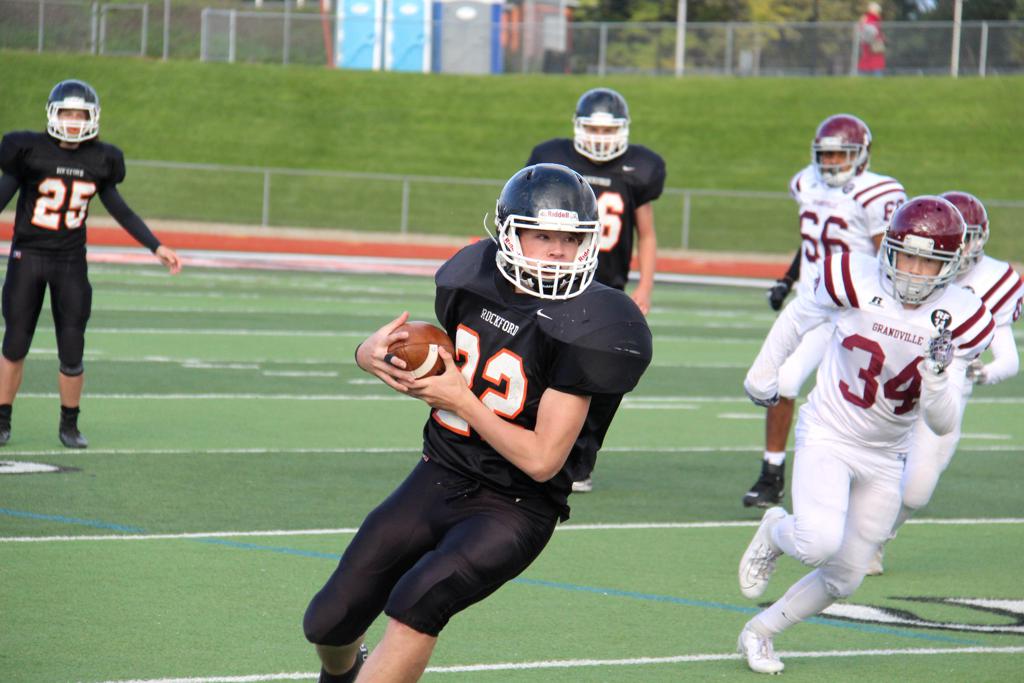 Running back Rick Beison tucks the ball as he heads downfield. ~ Photo by Jeannie Gregory 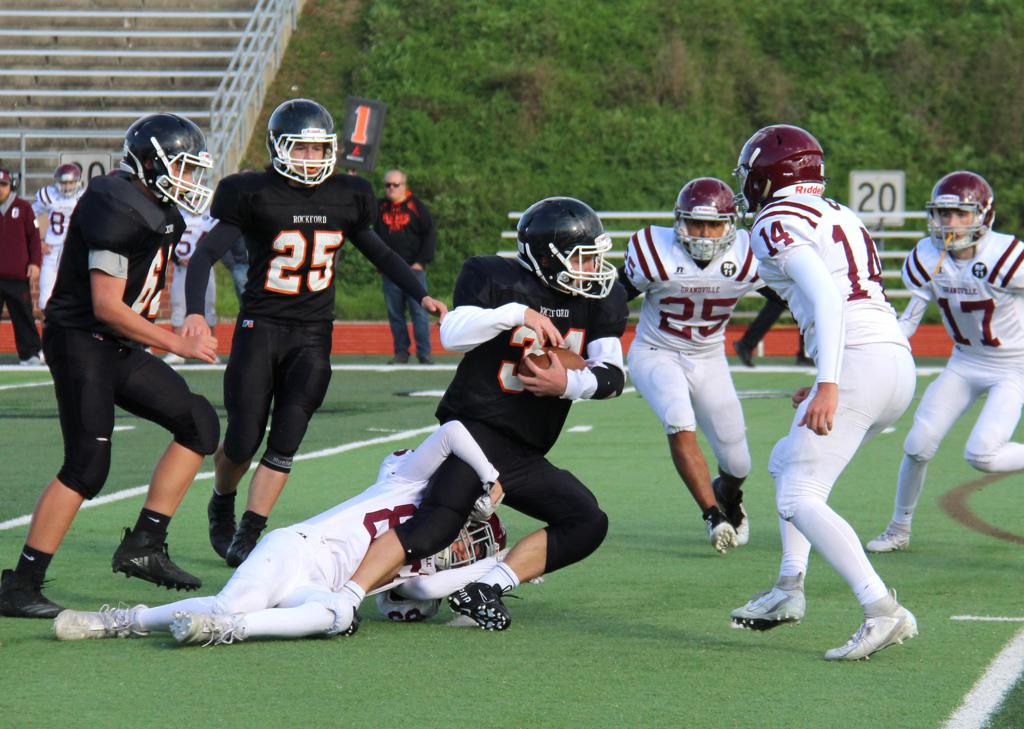 Jack Hodsdon fights for more yardage, carrying a Grandville player with him. ~ Photo by Jeannie Gregory 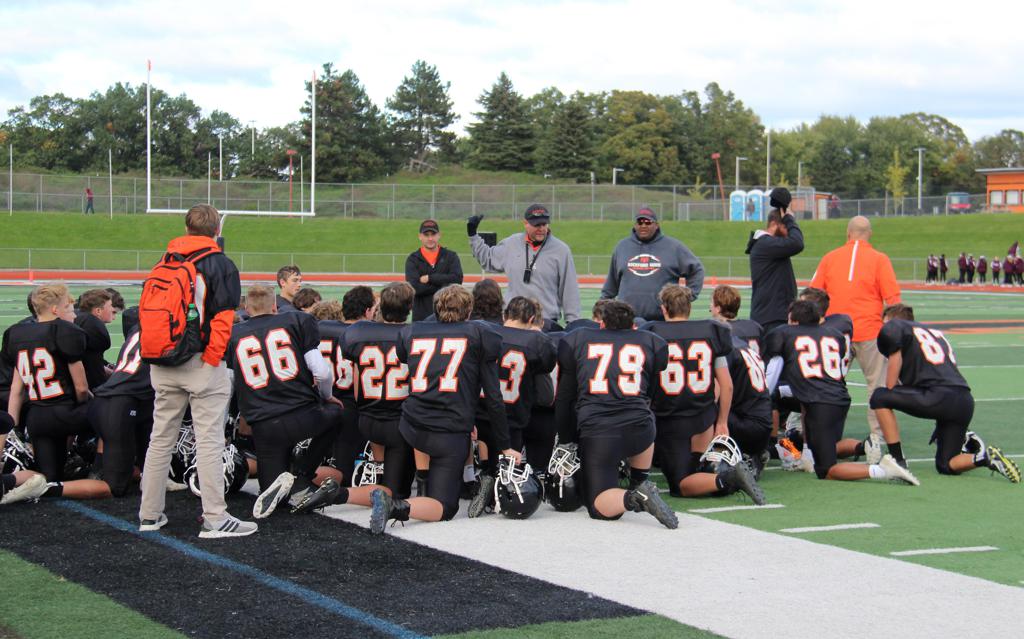 Photo Gallery of this game can be found here.