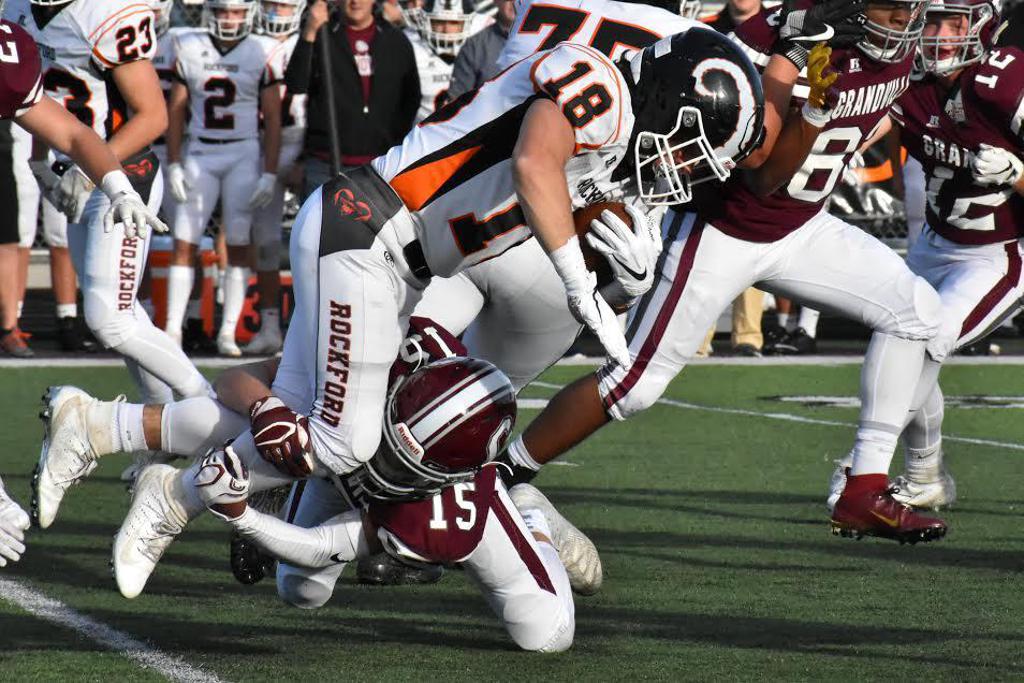 Grant Bisbee carries the ball down the field for the Rams. ~ Photo by Connie Hill

GRANDVILLE - It is easy to sit back in reflection and come up with the conclusion that a 30-3 Rockford loss to Grandville on the road Friday, Oct. 18, was a tale of two halves. After all, the Rams took a 3-0 lead into the locker room at the half and were receiving the second half kickoff with a chance to extend the lead to two scores with a solid drive.

Despite the three official second half turnovers (two fumbles and a pick six) and another unfortunate instance when Rockford scored a safety on themselves, the outcome was greatly aided by the Rams inability to cash in on several opportunities and overcome a tough Grandville defense in the opening half to build a fairly sizable lead. It certainly wasn't for a lack of opportunities in the opening half, but rather a collection of playing loose with the football and a few inopportune penalties that the half ended with only a 3-0 Rockford lead.

On Rockford’s first drive of the game, they were smartly marching up the field and looking at an easy conversion for a first down inside the Bulldog 30. However, a chop block penalty pushed them back 15 yards and they were eventually forced to punt. The next drive saw the Rams get inside the Grandville 10 before fumbling (though they recovered this one) but instead of finding the end zone they ended up having to settle for a 30-yard Teagen Lenderink field goal that would prove to be their only points of the contest. The next Ram foray saw them attaining a first down at the Grandville 22 before turning it over via a fumble and coming up empty again. So, instead of taking advantage of their multiple chances to build on that narrow 3-0 lead the Rams were left regretting what could have been.

The grandiose plans of coming out with a vengeance in the second half came to a grinding halt almost before it began as Rockford fumbled the ball away again on their initial play of the half. After a pass interference penalty against Rockford on Grandville's first play following the fumble, the Dawgs scored from 23 yards out to take a 6-3 lead less than 30 seconds into the third quarter. The nightmarish third quarter was just getting rolling for the Rams.

After the teams exchanged punts, Rockford took over at their own 8-yard line. Once again, the Rams fumbled and recovered inside their own 10 before eventually lining up to punt the ball back to Grandville. A low snap was fielded by the Rams punter with a knee touching the ground in the end zone for a Grandville safety to make it 8-0. On the next series, Grandville marched the ball to the Rockford 24 where they were facing a fourth-and-nine. The Dawg QB rolled right and lofted a "Hail Mary" into the end zone where it was somehow reeled in to make it a 14-3 game after another denied two-point conversion attempt.

After another Ram punt, Grandville took over at their own 18. On the first snap, the Bulldog halfback burst through a hole on the right side and went 82 yards untouched into the end zone for another Bulldog score to make it a 22-3 contest still in the third quarter. Rockford appeared to finally recover from the shock of the third quarter onslaught and began to head up the field again late in the third quarter and into the final stanza. With a first down and 10 at the Grandville 40, an interception was returned 60 yards for yet another Dawg score. The two-point conversion was successful and the stunned crowd was looking at a 30-3 Grandville lead that held until the final whistle.

"You have to give congratulate Grandville for the way they played in the second half," said Rockford coach Ralph Munger. "Once they got us on our heels they really took advantage. But, we will be back. This team has a lot of resolve and I have confidence in our ability to rebound."

Jacob Vega led the Rockford rushing attack with 43 yards on 10 carries. Ethan Nash added 22 on seven attempts and Chris Corey had 21 yards on eight rushes. Corey was 13-of-22 passing for 118 yards and a pair of interceptions. Eli Haddad had a big day receiving with 79 yards on seven catches. Bradley Rohen-Blanton added three receptions for 15 yards.

Defensively, the Rams were led by Ben Tadych with 11 tackles. Cole Gleason, Andrew Lanham and Nick McCauley all pitched in with four apiece for the Rams. A Rockford defense that has prided themselves on avoiding the big play fell short on the evening as they gave up 70, 35 and 24-yard passes as well as the aforementioned 82- and 24-yard runs.

The loss left Rockford and Grandville tied atop the OK Red at 4-1 and both teams stand at 7-1 overall. The Rams will close out the regular season by hosting East Kentwood next Friday, Oct. 25. Grandville closes out the season against a dangerous Caledonia team on the road next week. A Rockford win will ensure no worse than a tie for the league title. 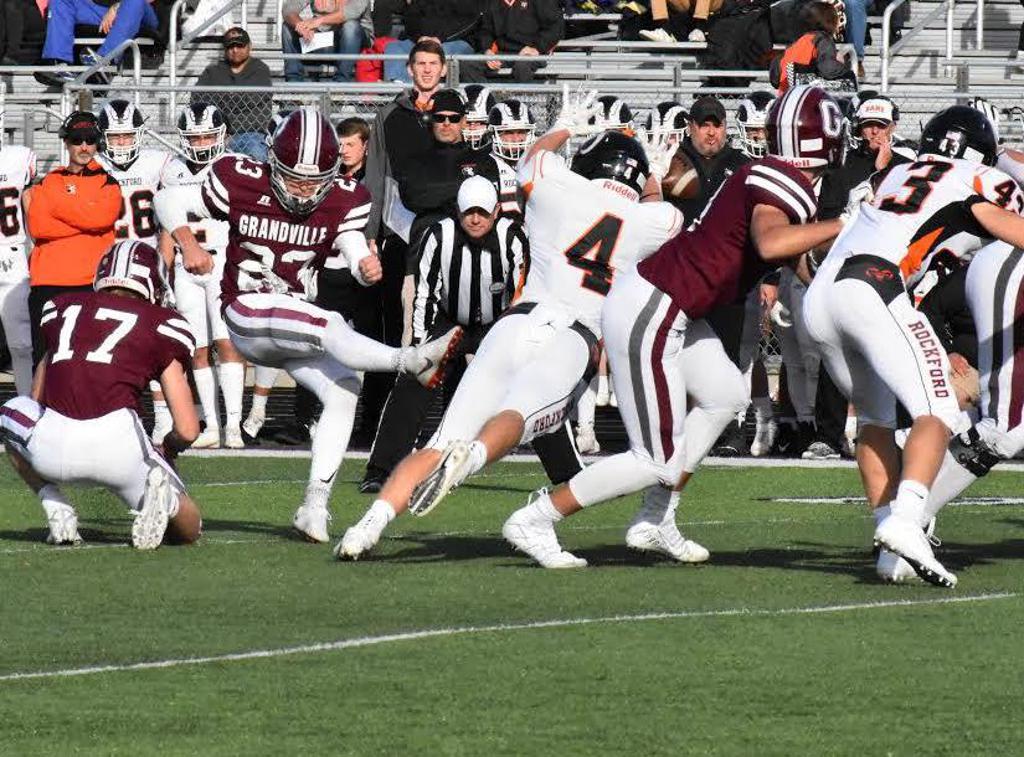 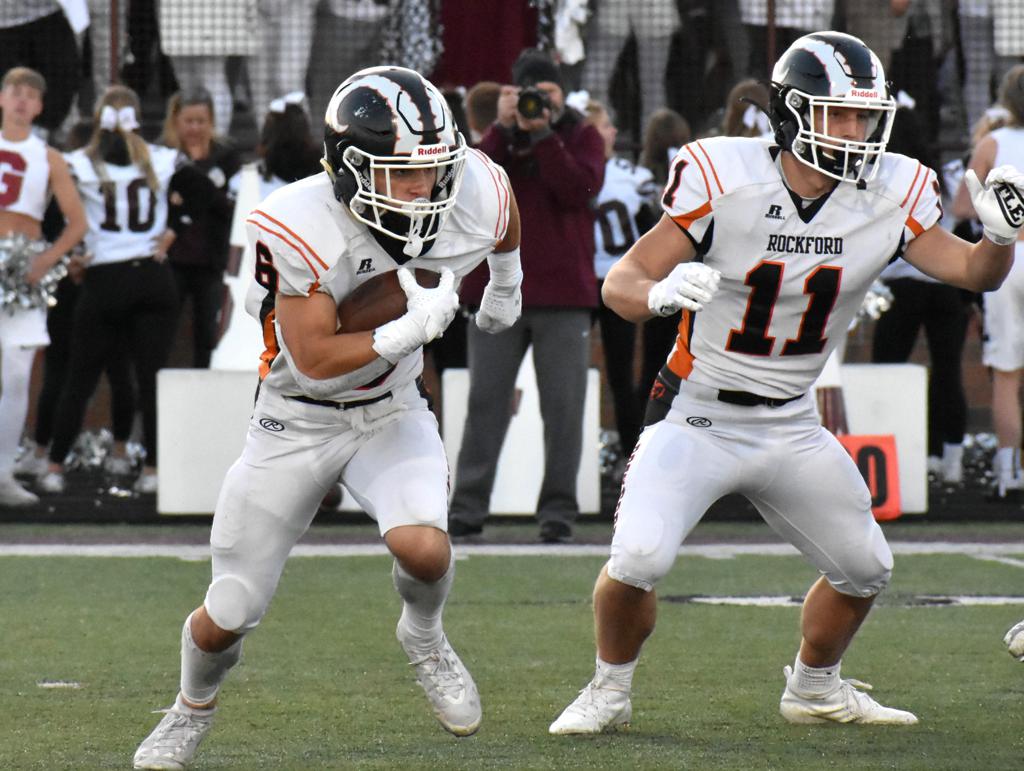 Eli Haddad takes off down the field as Mitch McCrone looks to block a Grandville defender. ~ Photo by Connie Hill 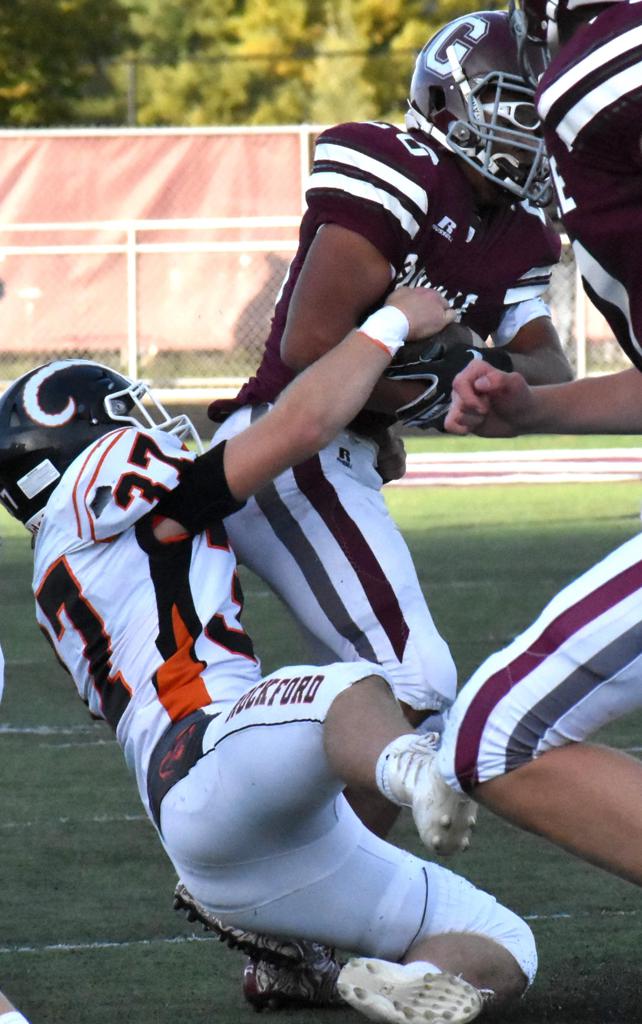 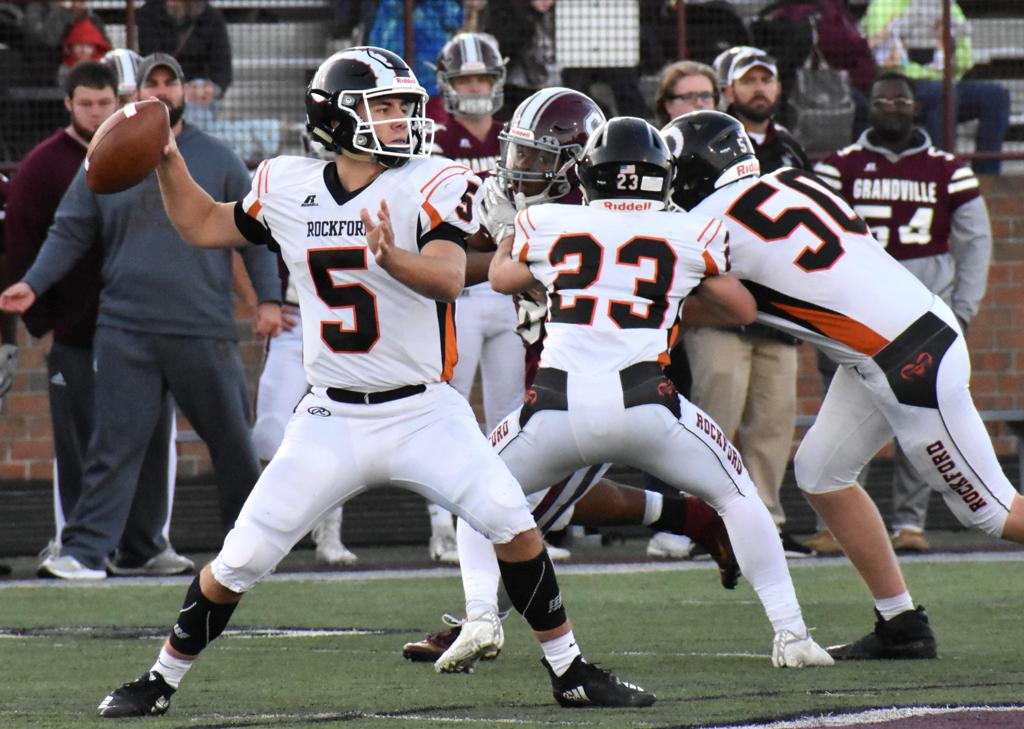 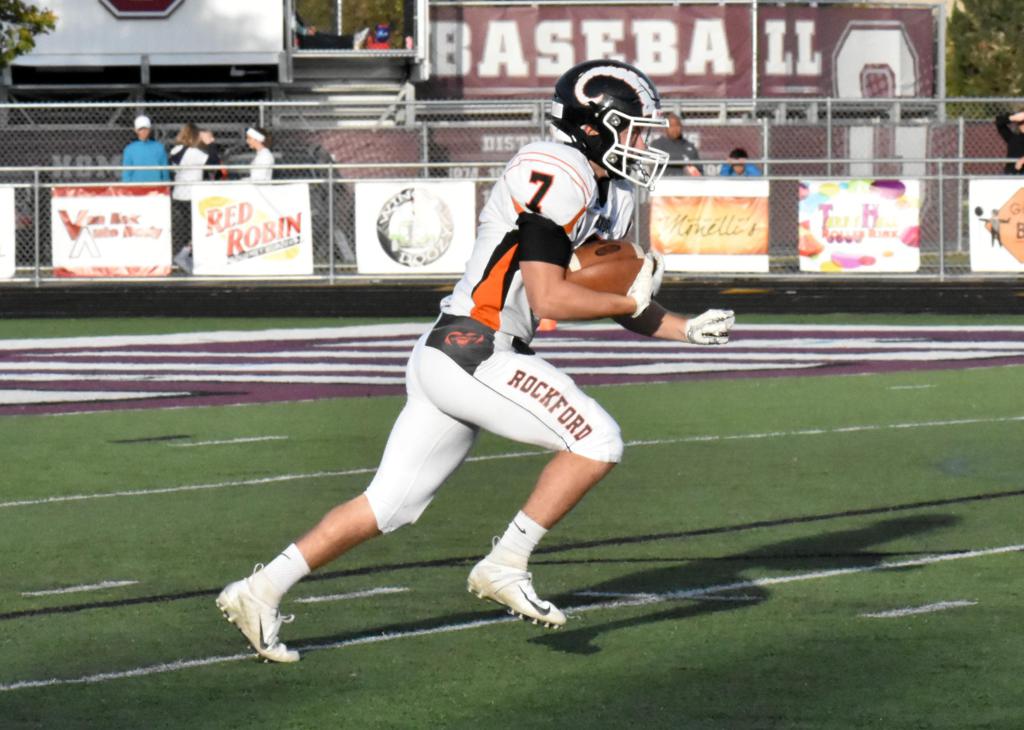 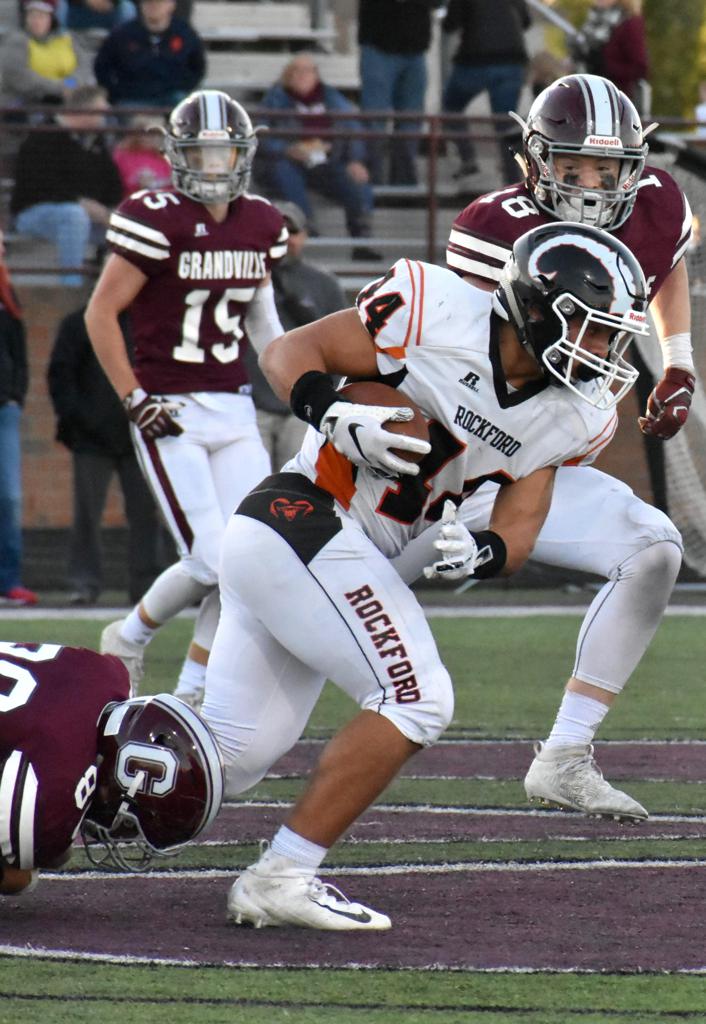 Jacob Vega carries a Grandville player with him as he works down the field. ~ Photo by Connie Hill 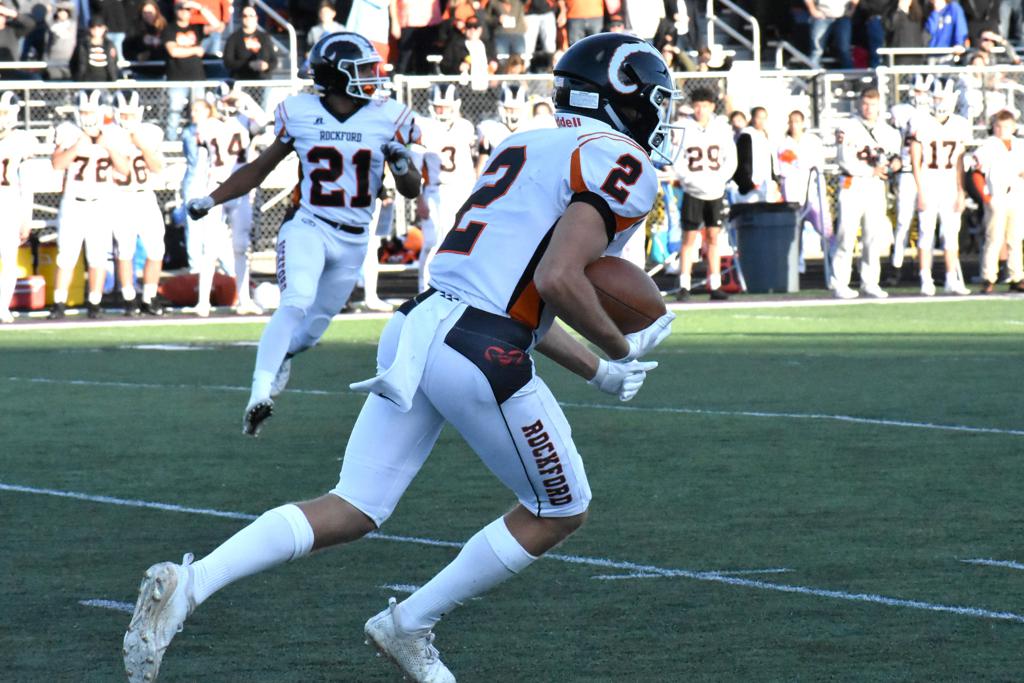 Bradley Rohen-Blanton works his way down an open field in football action against Grandville. ~ Photo by Connie Hill