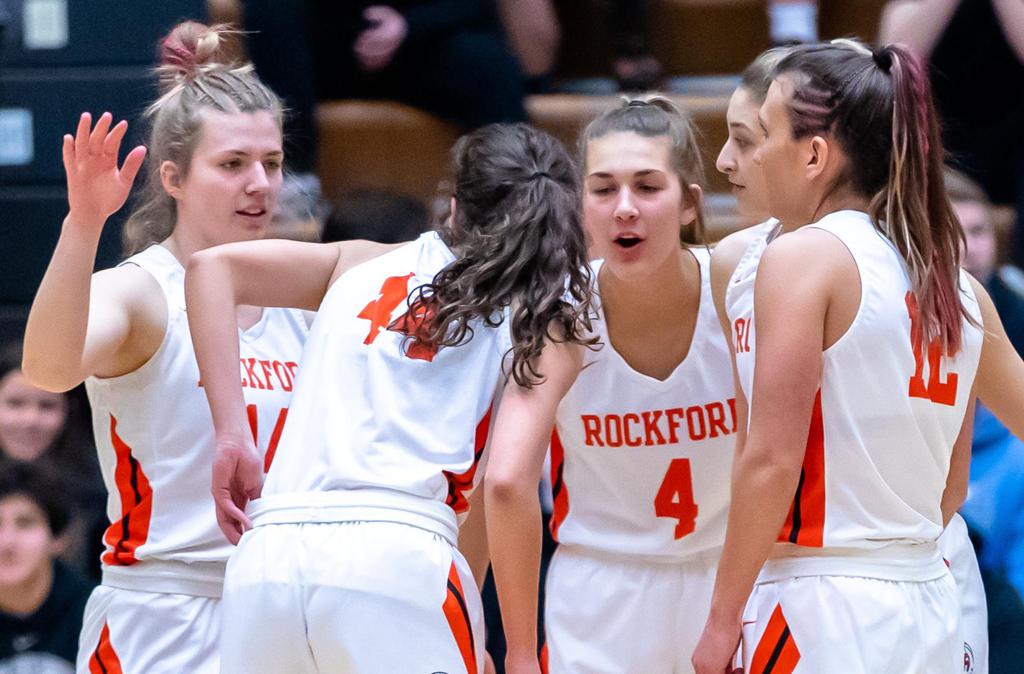 The Rams were always prepared and ready to ge every game. ~ Photo by Bill Sidor

HOLLAND – The Rams girls varsity basketball team entered the MHSAA Regional Semifinals just like they stepped onto the hardcourt all season – hungry for the win. The Rams were scheduled to play against the Hudsonville Eagles Tuesday, March 10, at West Ottawa High School. The cagers had faced off against the Eagles twice during the regular season and fell both times despite giving their OK Red foe a lot of competition, one of those games requiring overtime. Everyone knew this game would be a true test of both teams.

The Eagles were a formidable opponent, coming into the game with a 22-1 record and the Rams walked in with a 16-6 record, but there wasn’t anyone who doubted the Rockford team would give it all they had and test that Hudsonville record. The Lady Rams are driven, scrappy and skilled, and were fresh off claiming the MHSAA District Title just a few days prior. It was the first district crown the program had hoisted since 2010, a true indicator of how talented head coach Brad Wilson’s team was.

It took both teams a while to warm up, with the score 4-1, with the Eagles holding the edge with two minutes of play in the first quarter. It was a testament to how important this game was to both teams. They played tough “D” and shot tight to start. Ram senior Syd Reinke notched the first point of the game from the charity stripe to put Rockford on the scoreboard. Madison Kleefisch had a strong first quarter, netting six of the team’s points, and gave the Rams the first lead at the game with a 10-9 score. Reinke also added a “3” from beyond the arc to tally four points. Elle Irwin tied the game at 13-13 when she successfully scored a bucket despite being hammered and then drained a free throw to close the quarter’s scoring.

The Eagles went on a 4-0 run to start the second quarter, with Wilson calling a time out to recharge the Rams. Like this team has done all season, more players stepped up in the second quarter. Sami DeKuiper had some impressive steals, as did Megan McCauley to keep the Rams in the game. Alina Anderson drained a bucket and a free throw to move the score to 17-16 with the Eagles holding the slim lead. Hudsonville surged back out ahead, going on a 6-0 run before McCauley drained a “3” to move the score to 23-19 at the half.

Irwin kicked off the second half at the 5:28 mark of the third quarter with a bucket to move the Rams to within two points, but the Eagles had other ideas, scoring five before the Rams connected with an Anderson free throw. The Eagles were looking at a 33-22 edge before Irwin and Maddie Hutchings each scored buckets and then an Anderson steal found Irwin able to connect again to move the score to within five at 35-30. Anderson connected with two at the free throw line to move the score to 37-32 and keep her team within striking distance at the end of the third.

The Rams worked hard at keeping the score close with fouls, but Hudsonville was incredible at the charity stripe, almost perfect in their free throws, adding to the scoreboard with each trip to the line. The buzzer sounded with the 56-37 Eagles victory.

Setting the pace for the Ram scorers was Anderson with 11 points. Irwin tallied 9, and Kleefisch tallied 8. Reinke added 4, McCauley 3, and Hutchings 2 to help the Ram cause.

The Rams will say a fond good-bye to seniors Maddie Hutchings, Madison Kleefisch and Syd Reinke. The heart of the Rams, this trio led the team both on and off the court with their passion for the game, setting the pace for the 2019/20 campaign. 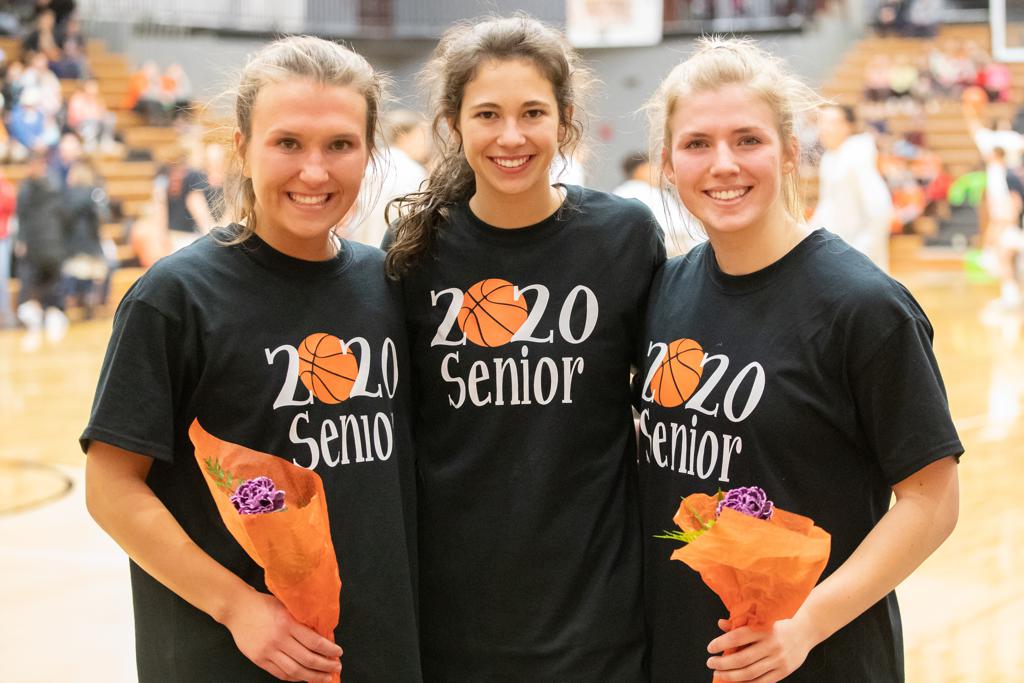 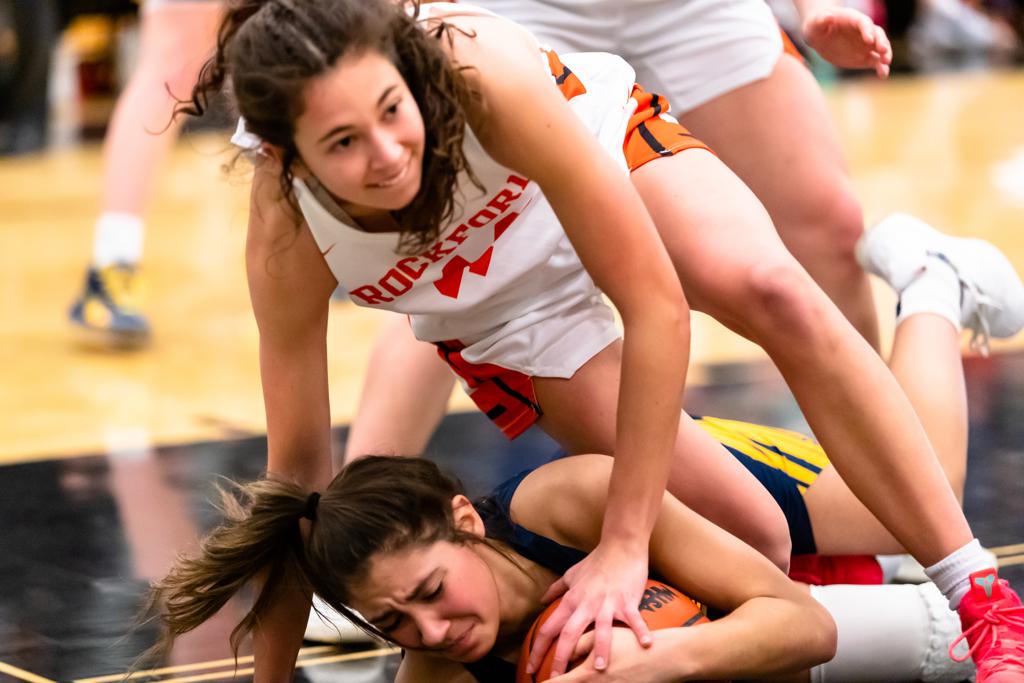 Senior Maddie Hutchings battles for the ball against an Eagle. ~ Photo by Bill Sidor 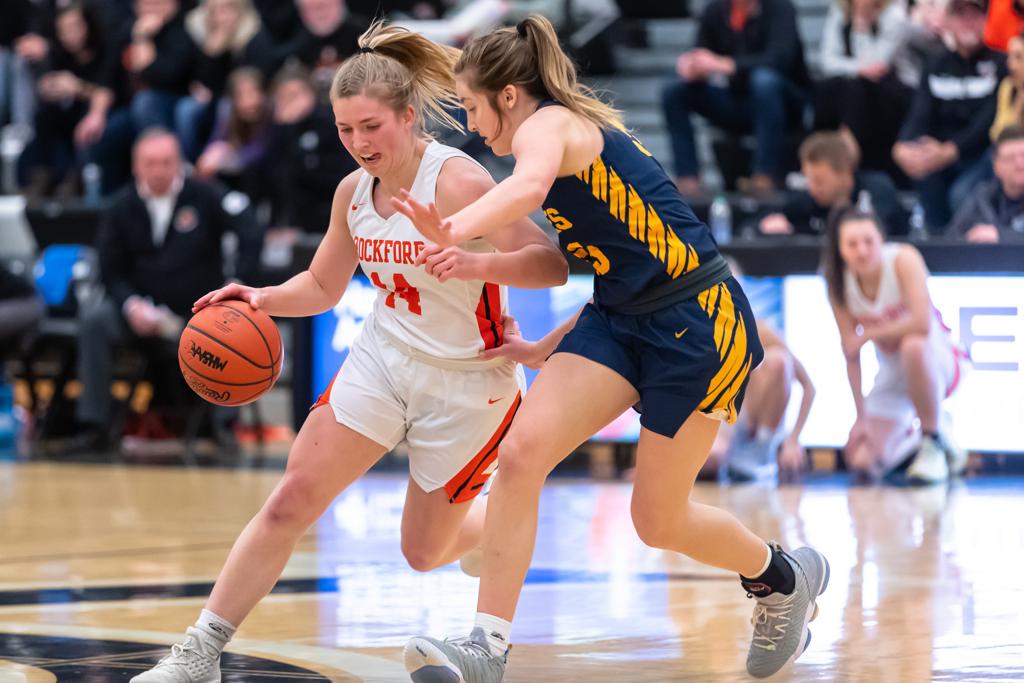 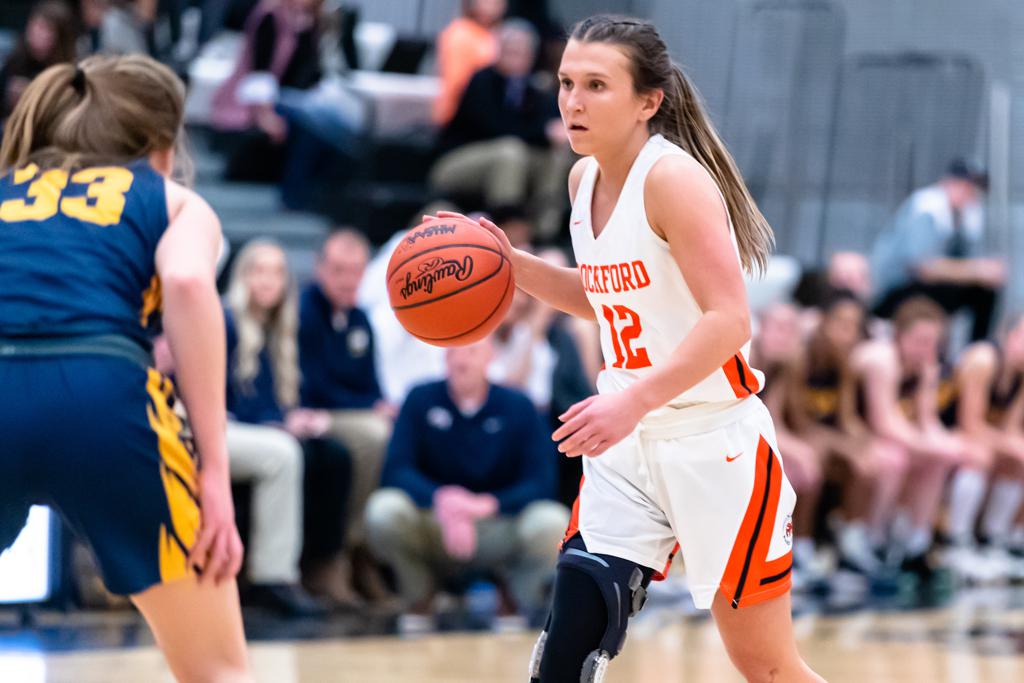 Senior Syd Reinke sets up a play against the Eagles. ~ Photo by Bill Sidor 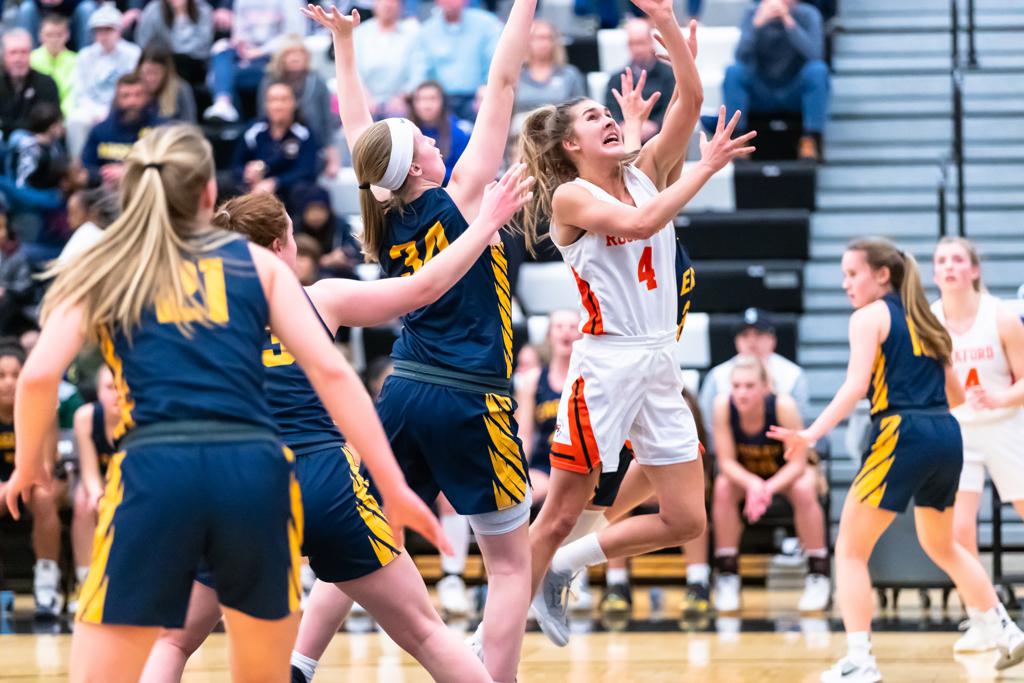 Alina Anderson goes Up for a bucket. ~ Photo by Bill Sidor 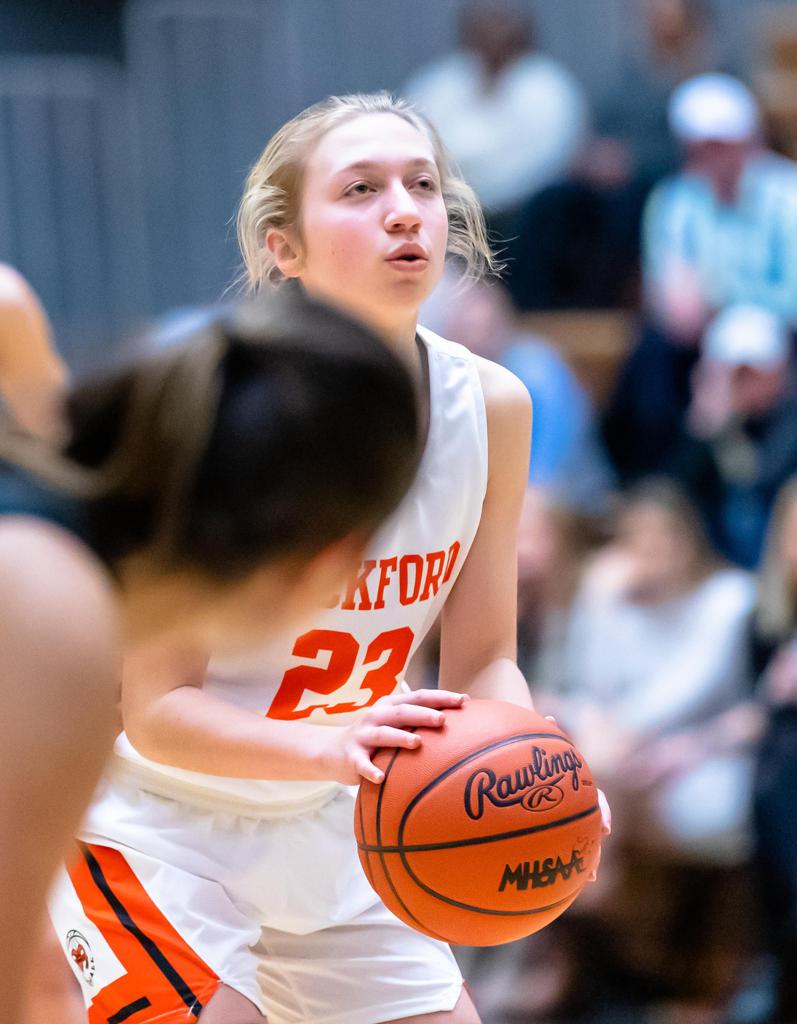 Alyssa Wypich at the line in playoff action. ~ Photo by Bill Sidor 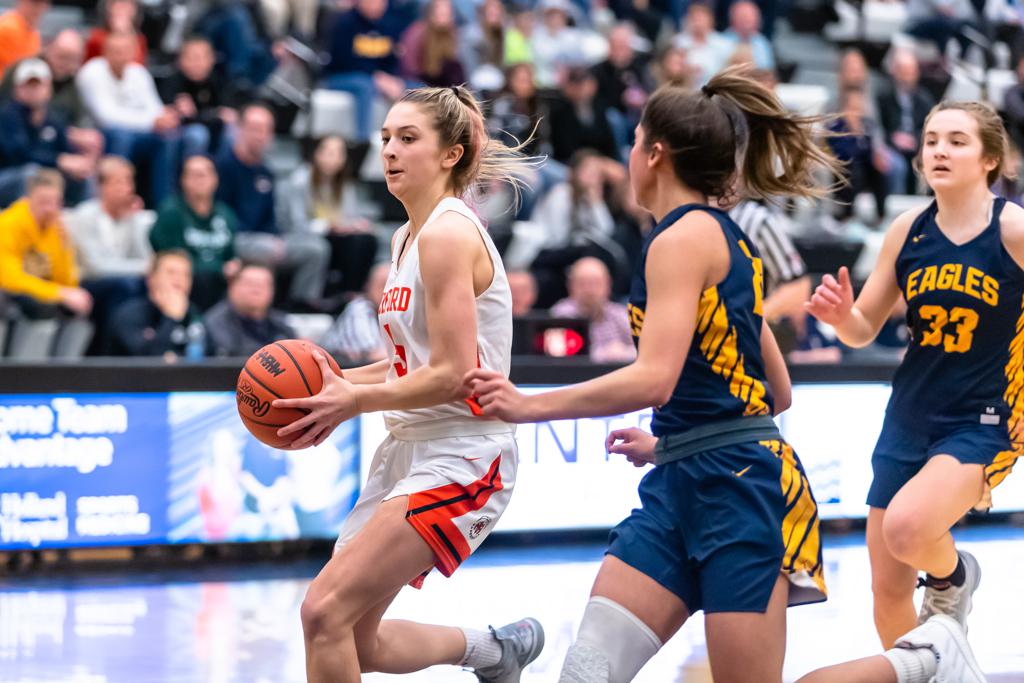 Elle Irwin takes on a number of Eagle defenders. ~ Photo by Bill Sidor 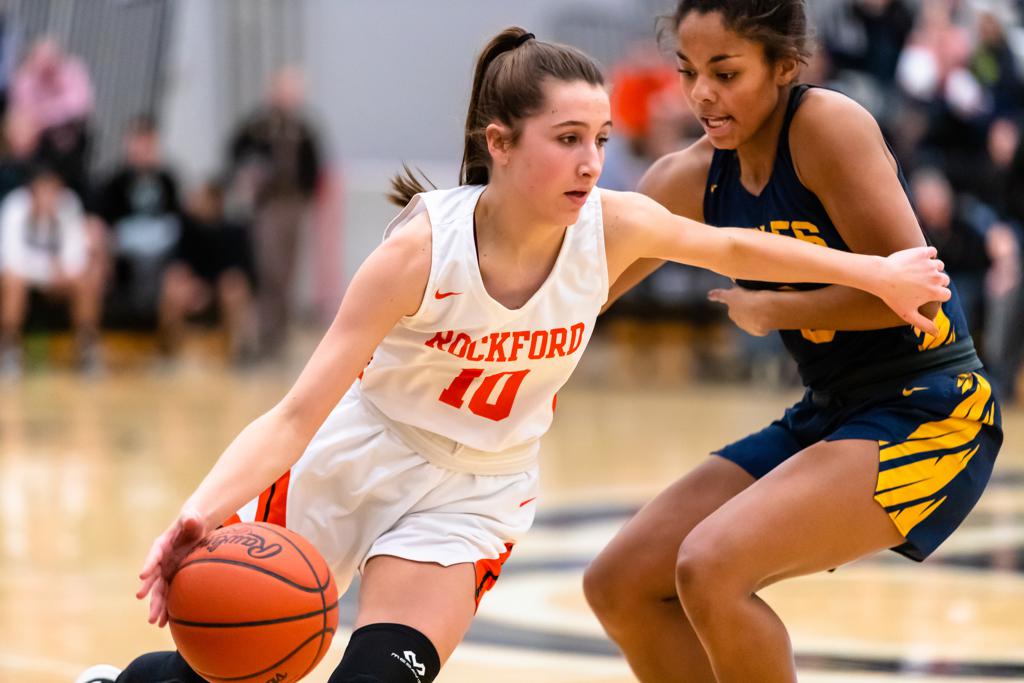 Madee Whitford works in the lane against Hudsonville. ~ Photo by Bill Sidor 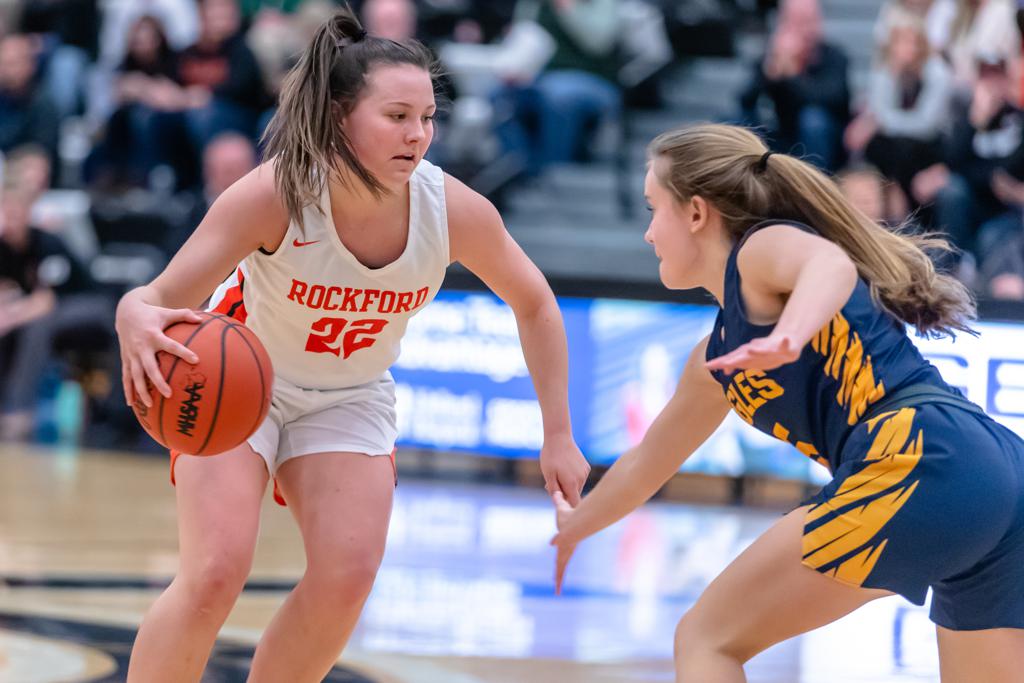 Megan McCauley takes on an Eagle. ~ Photo by Bill Sidor 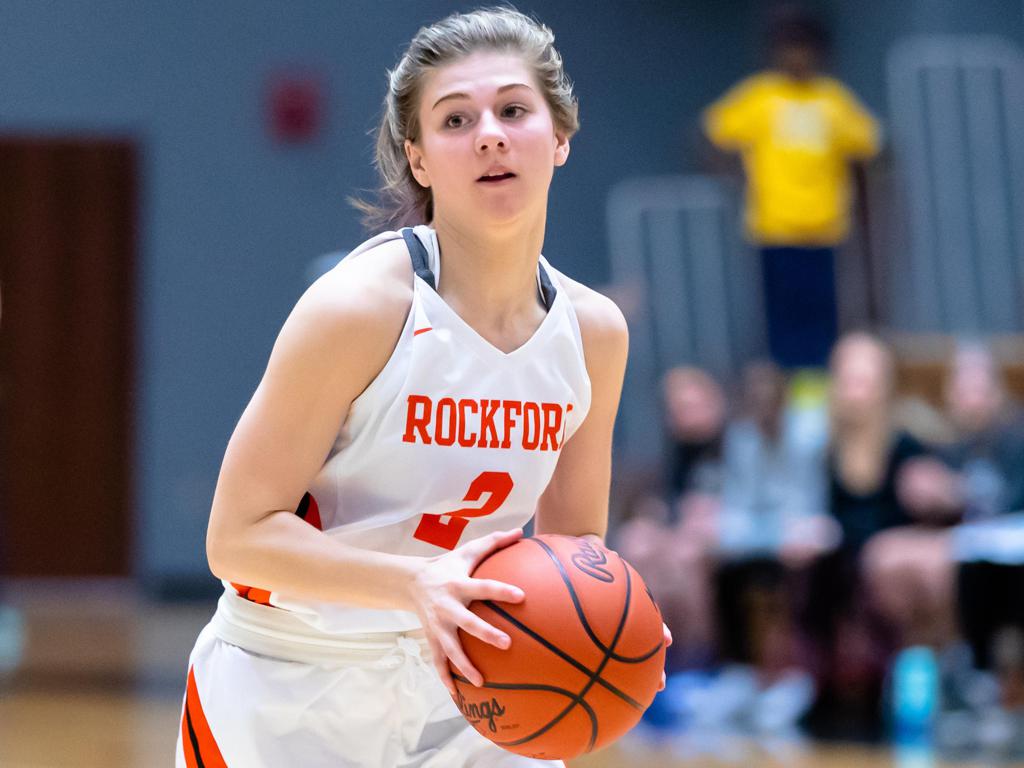