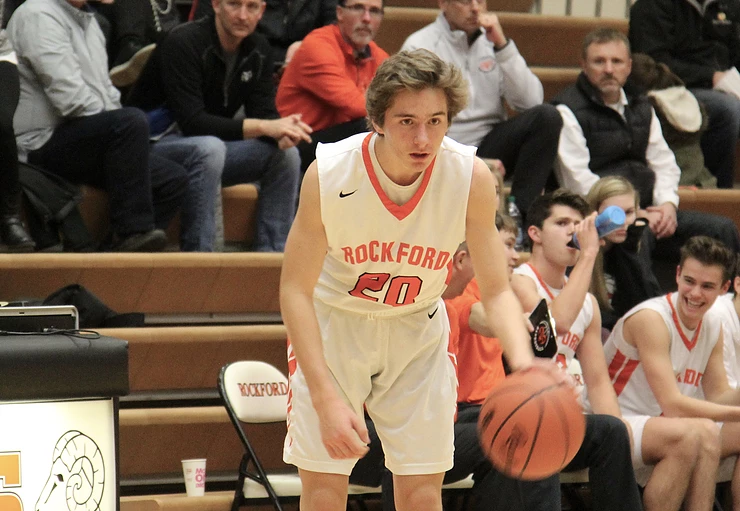 ROCKFORD – The Rockford varsity boys basketball team played host to the Lakers of Spring Lake, Tuesday, Dec. 11, and showed impressive play on both sides of the ball. Rockford dominated the entire game, earning a 57-25 victory to move their record to 3-0 on the season. 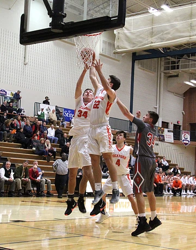 Spring Lake was only able to lead once in the game – and that was after draining the first basket of the game beyond the arc for a 3-0 lead. The Rams answered with three 3’s in a row to claim a 9-3 lead and never looked back. Rockford led 18-7 after the first quarter, and 37-14 when they headed into the locker room.

“I am really proud of Bennett Williams, Andrew Carlson and Brendan Schueller,” said Ram head coach Kyle Clough. “Those guys have been practicing and playing so hard, and to step up tonight with some big shots in that first half was really big for our team. If we make shots like that, we’ll be really tough. I’m also so proud of Nate Bareno. He is our best player and only scored two points, and could have cared less. He’s about the team, and is such a great captain. It says a lot about him.”

“It was a great team win for us,” continued Clough. “Spring Lake is a very solid team and well coached, so for us to come away with a convincing win like that says a lot about our kids. I thought our balance tonight was incredible. They really gave a lot of attention to Nate and Ashton, and to their credit, they were unselfish, made the right pass and gave our guards a chance to make an open shot.” 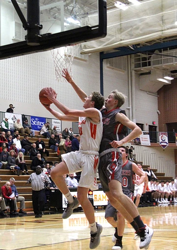 Sam Krist drives to the hoop. ~ Photo by Jeannie Gregory

“This team has potential to be pretty special if they don’t care who scores or gets the credit,” concluded Clough. “I’m really proud of their love for the team, and I’m really excited to see them compete on a big stage Friday night as we take on No. 1 team in state in Muskegon.”

The boys varsity team plays after the girls game concludes for the home contest on Friday night, Dec. 14.