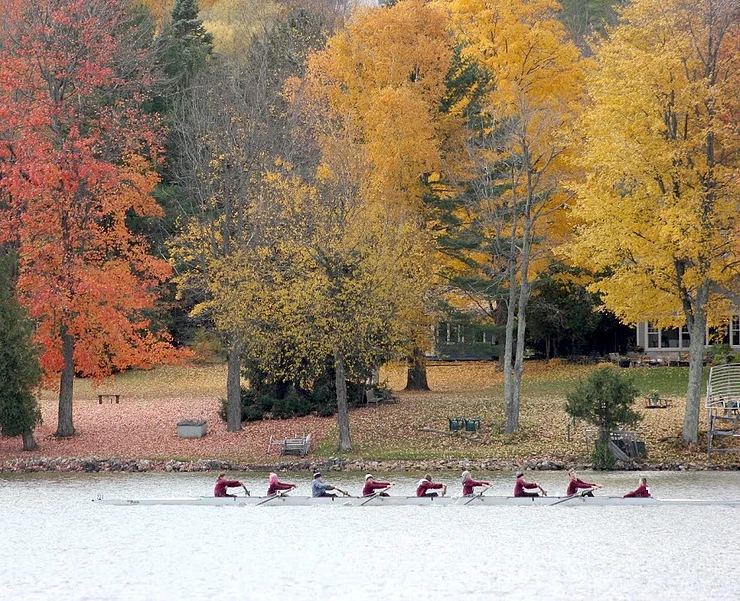 On October 28th, the Sunday morning sunrise in Leelanau, Mich. was met with the sound of bagpipes signaling the start of the 9th annual regatta competition. Rockford Rowing, including its partners as Jupiter Rowing, competed with over 220 boats in the beautiful Up North, as the last of the fall colors could be viewed on the beautiful shorelines of Lake Leelanau.

The rowers faced their toughest competitors of the fall season, which brought together over 500 rowing athletes from the Midwest. Thirteen clubs from Ohio, Michigan, and Indiana competed in 40-degree temperatures with light rain throughout the day. The brisk weather and late October conditions welcomed the athletes from our Jupiter Boathouse. These athletes were also joined by other West Michigan students from the East Grand Rapids Crew Team, the Spring Lake Crew Club and the Grand Rapids Rowing Association.

The high school and middle school rowers and coxswains raced down the 3.5-kilometer course. Many raced multiple times committing to each race of 15 minutes and demonstrating the toughness that rowers work diligently to build. The efforts were worth it as many athletes received their first medal in a competition. The middle schoolers had two medaling mixed eight seat boats, comprised of boys and girls, including a gold and a silver. First year high school rowers in the Women’s Novice 8+ and Women’s Novice 4+ both received bronze medals.

The varsity team had a respectable showing at the race. The Women’s JV 4+ boat comprised of Amelia Sundman, Sophie Stauffer, Hannah Burmania, Courtney Cocuzza and coxswain Callie Perini received a bronze medal for their efforts. Wrapping up the medal collection was the bronze obtained by the Men’s Varsity 4+ boat comprised of Joe Saenz, Morgan Werner, Jake Janssen, Chris Neihoff and Coxswain Alli Ziemba.

Men’s head coach Tucker Anderson felt the team had a great showing against some of the top teams in the state.

“The boys are a fairly young squad and we were still able to have a strong showing across the board,” said Anderson. “We need to work on our rhythm and timing this last week as we put it all together and look to end the season on a high note.”

Women’s head coach Itter also feels that the women’s team is in a great position heading into the winter conditioning season, with definitive plans on what to work on to make the spring season successful. The fall season had beneficial in refining skills, challenging rowers to try more difficult boats, and building great bonds and relationships.

“The varsity and novice boats have made strong progress since the start of the season, especially over the last few weeks where we’ve closed the gap on the top squads,” said Anderson. “We still have some speed to gain as we continue to work on our rhythm and timing heading into our last week of the fall season.”

The rowing fall season concludes with its final fall regatta in Northville, Mich., Saturday, Nov. 3. Winter conditioning will commence in a few weeks and Rockford Rowing will launch Spring Season in March 2019 as the women's team will seek to defend their state championship and the men's team will seek to demonstrate their strength in their new numbers. 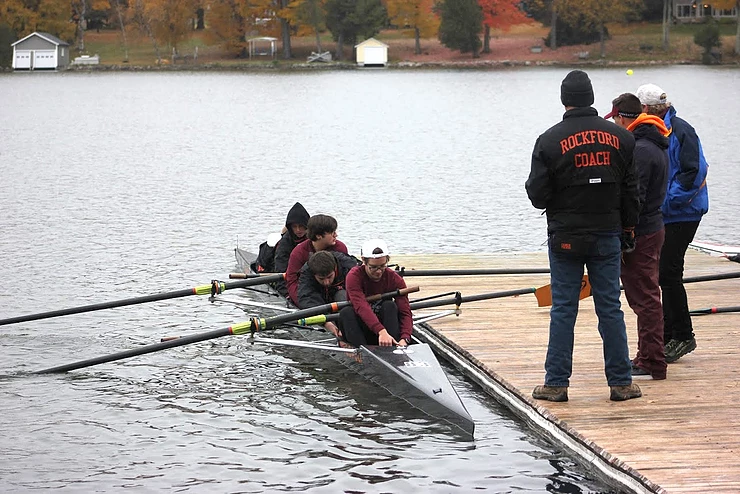 Men's Head Coach Tucker Anderson prepares the launch of one of the men's four boats. ~ Photo by Aaron Sundman 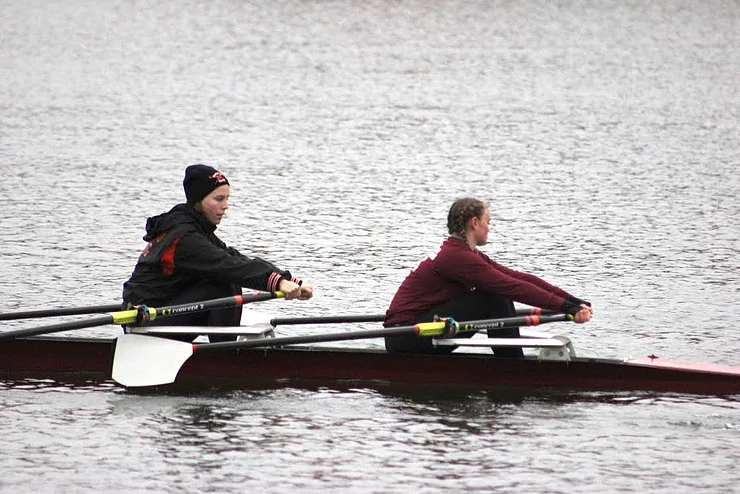 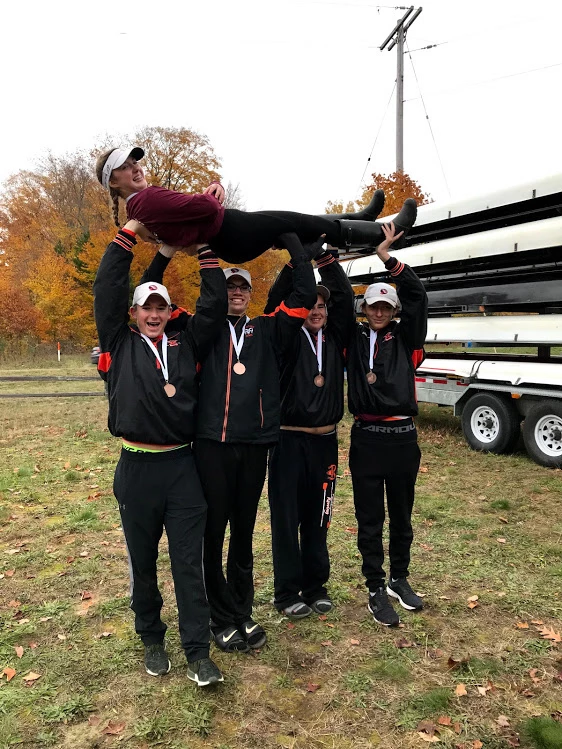 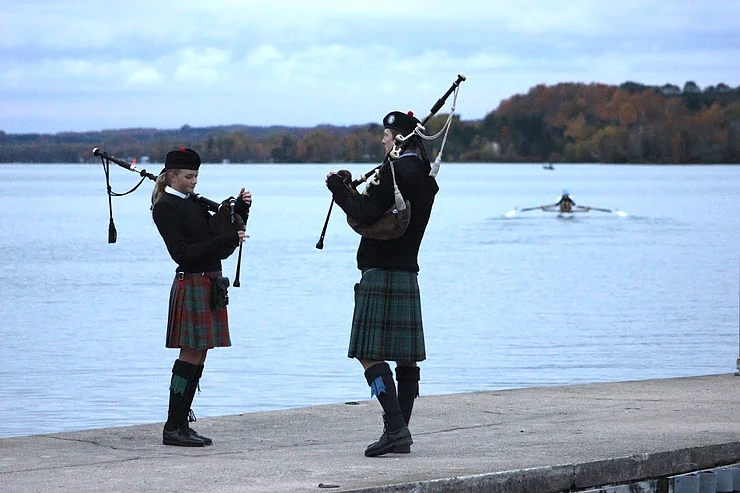 The traditional bagpipe welcomes the sunrise and the start of the competition. ~ Photo by Aaron Sundman 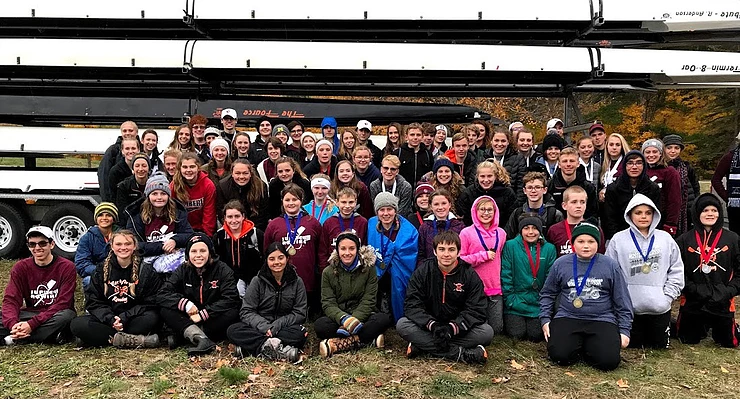