Rockford Rowing at the Head of the Charles 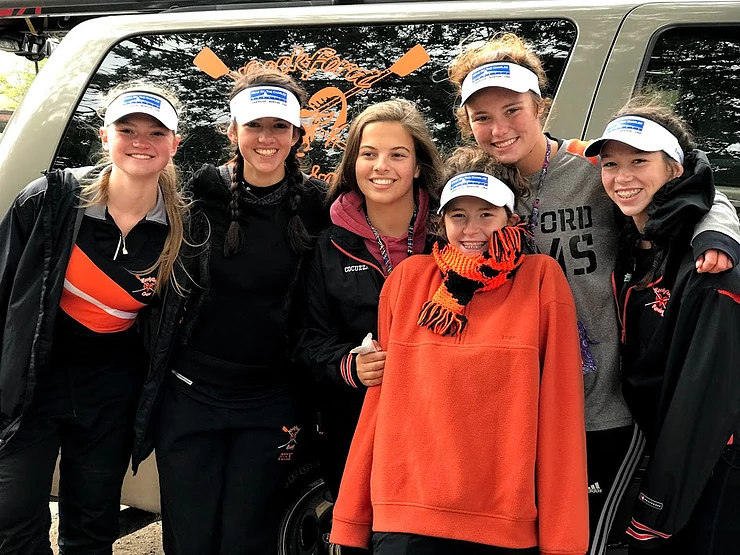 Crowds from all over the world flocked to Boston Sunday, Oct. 21, 2018 and the Orange and Black of the Rockford Rams was well represented at the distinguished annual event. Rockford Rowing made their fourth visit to the world’s largest two-day regatta, the Head of the Charles in Boston, Mass. The event was first held in 1965 and is a three-mile course where athletes race down the Charles River rowing through the brisk New England fall temperatures. More than 11,000 athletes from all over the world competed in 60 different race events, with limited opportunities for high schoolers to compete. The event attracts thousands spectators during the October weekend. It's an iconic race course, ready to challenge the toughest and most determined, and the Rockford girls in the boat rose to the challenge.

Athletes included Rockford senior Emma Lassig, juniors Callie Perini, Sophie Stauffer, and Amelia Sundman, and sophomores Hannah Burmania and Courtney Cocuzza. They placed a very respectable 49th place finish in the Youth Fours event, which had 85 of the top boats in their age category from all over the world. This young team competed against many boats filled with 18-year-old athletes, yet their grit and determination shined through. They also felt the support and strength from their team of 100 strong back in Rockford.

Bridget Lassig, President of the Rockford Rowing Boosters Club commented, "We have many more athletes that work incredibly hard to strive for bettering themselves and the club. Some helped secure the slot that allowed this group to row, some have moved on to collegiate rowing or coaching, and many are on the team know. This trip represented the payoff for the hard work that we've had the grace of witnessing firsthand. I hope that every athlete in Rockford Rowing understands the heart and soul of this team comes from all their efforts and the cheering for every rower in every race."

To add to the Rockford presence at the world-renowned event, Rockford Rowing alumni and current collegiate rowers Elaina Loveless and James Anderson competed with their college teams. Loveless, a freshman at Northeastern University located in Boston, Mass., followed up her 28th place finish in 2017 at the Head of the Charles as a Senior in Rockford Rowing with her first Club Eight competition with Northeastern. They rowed to a fabulous eighth place finish at this year’s event.

Rockford Rowing alum and University of Michigan sophomore James Anderson competed his way into U of M’s boat of top eight rowers, joining six UofM seniors and one junior. After a disappointing fourth place finish last year, the UofM Men’s Collegiate Eight boat earned their second gold medal at the Head of the Charles. Michigan competed against 34 other entries to claim their title and their first Head of the Charles gold medal in the event since 2014.

“It was the hardest race of my life,” said Anderson. “It was a tough race with really tough conditions, some of the worst I’ve seen. When we got to smooth water, however, it clicked and we flew for the last 1000 meters.”

Additional Rockford alumni and current or former rowers for Wellesley College, Smith College, Boston University and MIT, were able to join the spectators on the shoreline and root for the Rams in the Orange and Black.

Girls varsity head coach Dilan Itter offered encouragement to the girls moments before they launched for the start of the race.

“You guys got this, just race your race and stay focused on it,” Itter told them. “Just make it the best race. Have some fun; we’re at the Charles.”

Assistant coach Grant Hoffman noted following the race, “It was the best race I’ve seen these girls have. They should be really proud.”

The Rockford community was proud, as the riverbanks were flooded with spectators and teams and families who waved flags and yelled encouragement to the rowers as they glided past. Sounds of cowbells chimed out along the shores. There were 43 states and 24 countries represented in the race this year, including teams from Canada, Ireland, Japan, Germany, Cuba, South Africa, and the Netherlands. 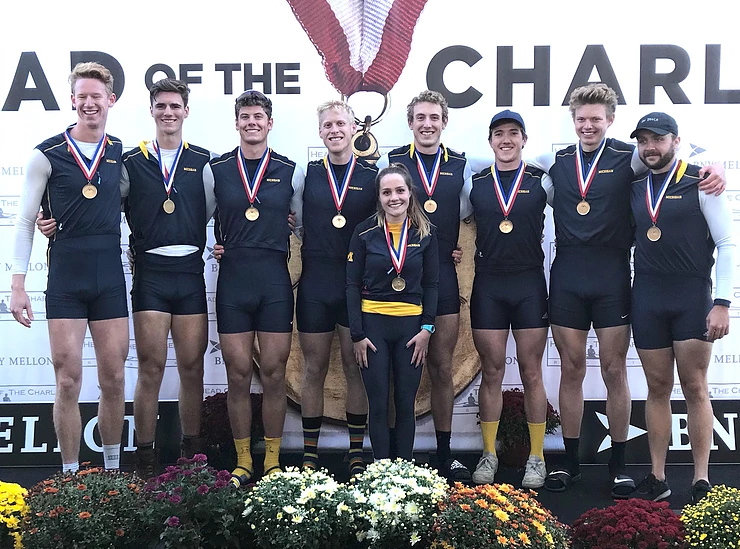 Rockford graduate James Anderson, second from right, earns a Gold Medal at the Head of the Charles with his University of Michigan teammates. 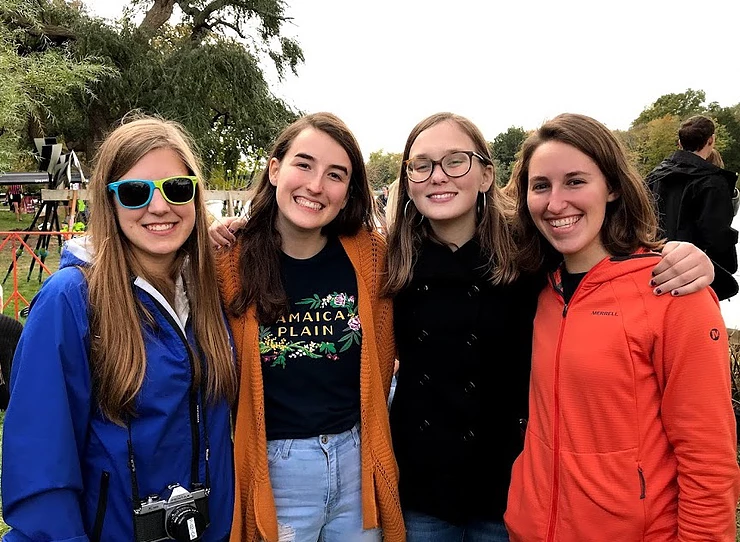 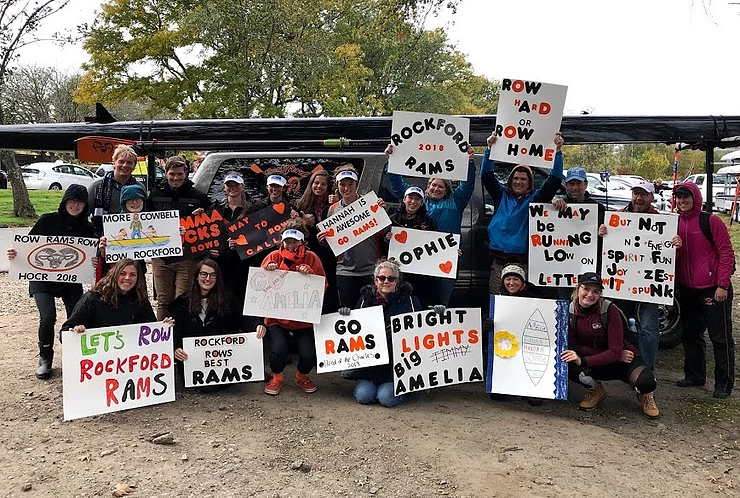 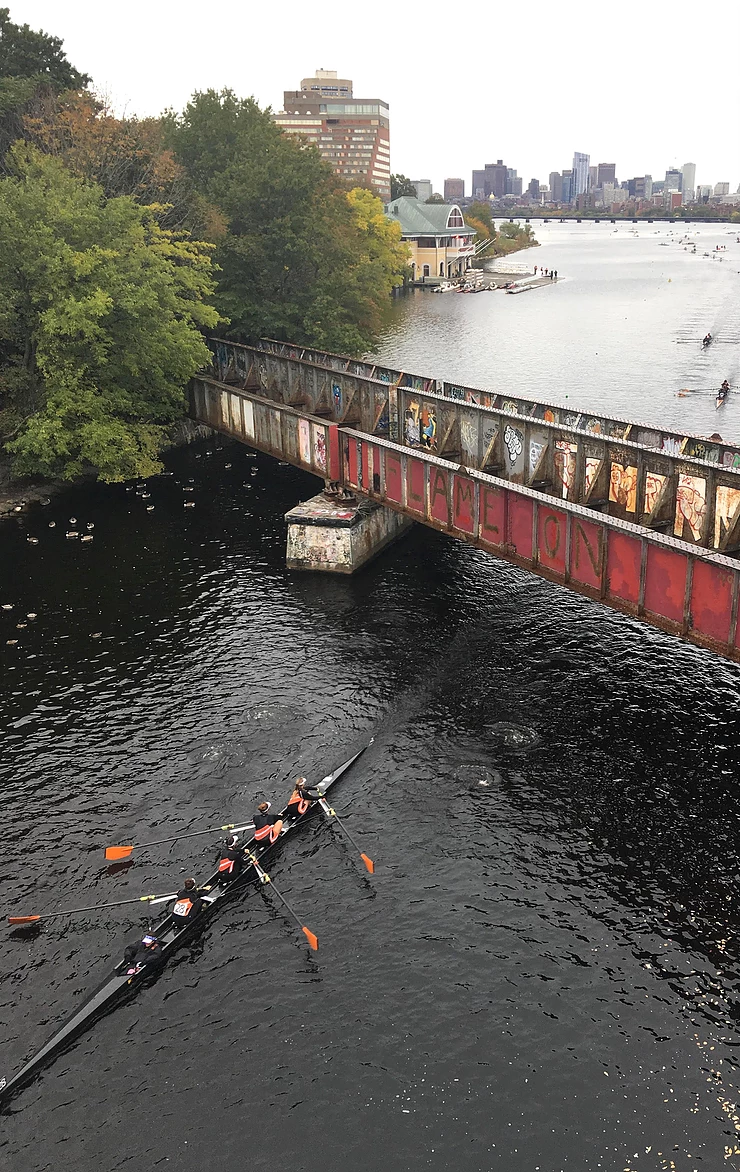 The Rockford boat at the start of the Head of Charles Regatta.