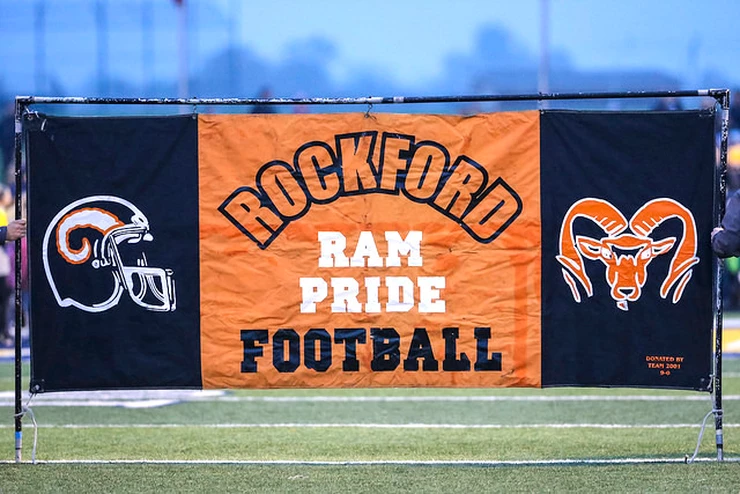 It isn't often that you can say one team dominated another in a football game when the final score ends at 18-13. The Michigan High School Athletic Association (MHSAA) Division 1 playoff game held at Thirlby Field in Traverse City on Friday, Oct. 26, was one of those days, though. Rockford ran 26 plays inside the Titan 20-yard line on the night and accumulated exactly six points for those efforts. Well over half of the game was played between the TC West 40 and their own two-yard line.

Various Ram drives ended up at the Titan 40, 11, two, four and nine-yard lines. Had it been a normal night, Rockford could have trotted out their reliable field goal unit on at least four of those occasions and booted a chip shot field goal while easily posting a three or four touchdown triumph. But in keeping with a strange night where Rockford carried the action from the opening whistle, the Rams had two extra points and a field goal blocked as well. 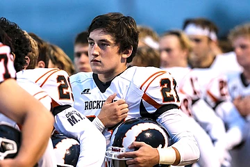 "You like to see growth and progress from your team as the season progresses and usually the scoreboard will take care of itself in determining the winner," said Rockford coach Ralph Munger. "But that was close to the ugliest evening I have seen all year. I am pleased we will get the chance to have another opportunity to improve but we have to be able to use the skills we have been taught over the course of the season and get better as we advance."

The Rams began the game like a house afire as they scored touchdowns on their first two possessions. After receiving the opening kickoff Rockford sophomore quarterback Chris Corey completed a seven-yard pass to junior Eli Haddad that put the Rams at their own 41. On the next play junior fullback Jaiden Friesen took a hand off and stutter-stepped to the side before streaking 59 yards untouched to the end zone to give Rockford a 6-0 lead with 11:35still showing on the first quarter clock. As mentioned earlier, the point after was blocked.

Traverse City West then fumbled on their third play from scrimmage and Ian Rodriguez pounced on the ball at the Titan 34 to set the stage for the next score. Corey then connected with 6'6" wide receiver Nate Bareno for a 14-yard TD pass on a third down and goal play from the Titan 14 to push the lead to 12-0 with 7:25 still to play in the opening quarter. It appeared for all intents and purposes that the rout was on at that point. But despite golden chance after golden chance the Rams somehow came up empty until there was 2:18 left in the game.

The Rockford defense was magnificent all night long, save for one play. The Titans had exactly three first downs for the entire contest until the clock ran under the three-minute mark in the final quarter. TC West had negative yardage on the ground for the night and had a single big passing play late as they struggled all night long with the stout Ram defense.

But that one big play came in an unexpected manner late and made what was an almost taken for granted dominant Ram victory something of a thriller. Facing the usual barrage of a heavy Ram pass rush, the Titan quarterback heaved up a prayer to his receiver down the left side. Two Ram defensive backs were staring at an almost sure interception as the ball began it's downward flight. But they somehow got tangled up with each other as the shocked Titan wide out gathered the ball in and sprinted 81 yards untouched to make it a 12-6 game with 2:23 still to play.

TC West had burned all of their timeouts and was left with the only available option of recovering an onside kick. That maneuver backfired in spectacular manner. The ball was squibbed towards the Ram receiving team where it was grabbed in-stride by Ram junior defensive back Dylan Dams in a full sprint. Dams took off like he was shot out of a cannon and crossed the goal line to make it an 18-6 Ram lead with 2:18 left in the contest. 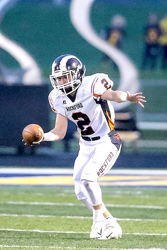 Jack Richardson in action earlier in the season. ~ Photo by Miles Postema

It would seem that the score would be the final nail in the Titan coffin, but it was then that a plethora of yellow flags flew. Despite intercepting the first pass thrown by TC West, the Rams had that play nullified by a roughing the passer call. Then in rapid succession, there was another personal foul against the Rams, two consecutive pass interference calls on Rockford and for good measure, an unsportsmanlike conduct penalty that gave the Titans the ball at the Rockford one. Despite all of that, the Rams appeared to have recovered a fumble to stymie that drive, but the officials ruled the ball was fumbled after the runner was down. With 35 seconds left the Titans finally got into the end zone to make it an 18-13 game.

The ensuing onside kick was kicked out of bounds and the Rams took a knee on one final play to earn the strange victory. Rockford now sits at 6-4 on the season and advances to the district final next week. Their opponent will be a familiar one as fellow OK Red member Hudsonville will provide the opposition. Hudsonville held on for a thrilling 49-42 win over West Ottawa to punch their own ticket to the next round. It isn't official as of the writing of this article but it is widely assumed that contest will take place Friday, Nov. 2, at 7 p.m. with the Eagles being the host team. The winner will move on to regional action and face off with the winner of the East Kentwood-Saline contest the following week. 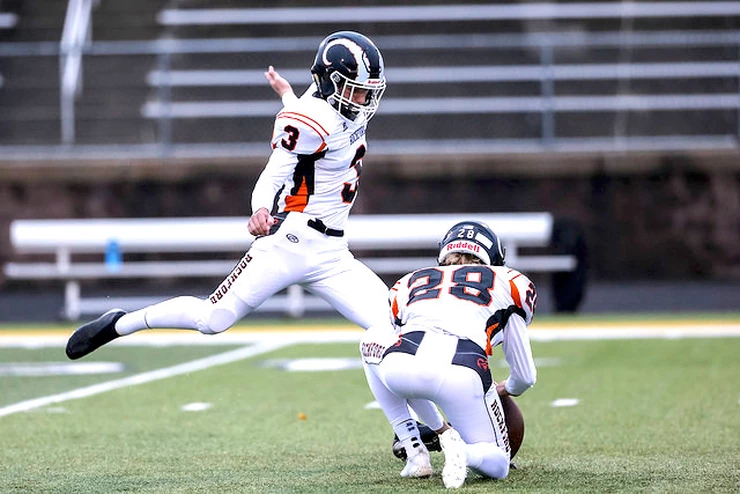 Teagen Lenderink practicing for a PAT. ~ Photo by Miles Postema