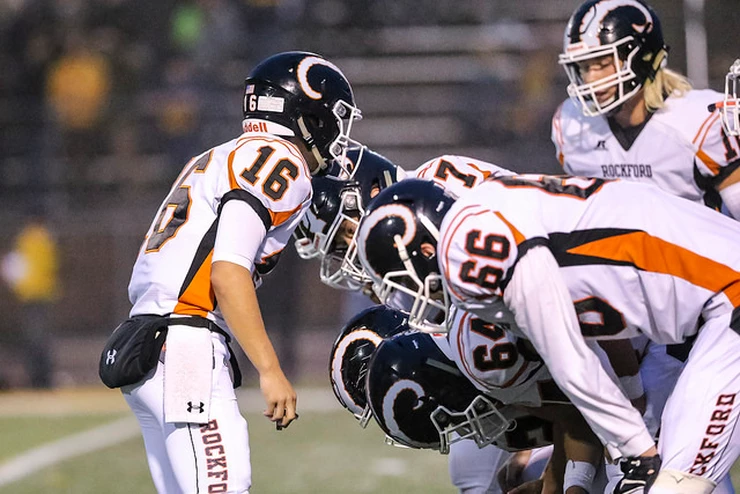 EAST KENTWOOD - Rockford knew coming into the game at East Kentwood Friday, Oct. 19, that the margin for error was going to be thin if they hoped to pull off the upset over the powerful Falcons. For the first three quarters, and into the fourth, the Rams had forced a pair of turnovers from East Kentwood and had committed none of their own in windy, cold and drizzly conditions. Rockford had just forced a turnover on downs at their own 10 and was beginning to grind their way up the field again while narrowly trailing 14-10.

But, disaster struck several plays later when a Ram fumble was recovered by East Kentwood at the Rockford 32. A few plays later the lead grew to 21-10 and signaled the beginning of the end for Rockford's OK Red title hopes. Rockford then fumbled the ensuing kickoff at their own two and fumbled another pair of plays later in that drive. They managed to recover those three fumbles but a dropped pass on a fourth down play gave the ball back to EK at the Rockford 45 a few plays later.

Once again, the Falcons scored in short order to make it 28-10 with just over four minutes to play and the die was cast for a Falcon victory. Rockford scored a touchdown with .6 seconds to play on a 24-yard touchdown pass from Chris Corey to Drew Bareno to make it 28-17 but, that was how it ended.

With the loss, Rockford ended the regular season with an overall mark of 5-4. They also ended up tied with Hudsonville for second place in the OK Red at 4-2. East Kentwood finished at 8-1 overall and a perfect 6-0 in conference play to claim a solo crown. The early indications are that Rockford may just squeeze into the playoff field for the 24th consecutive season. But, until the playoff pairings are announced by the Michigan High School Athletic Association (MHSAA) Sunday evening, that is not a sure thing.

"I was extremely proud of the efforts of a number of our players tonight from the opening whistle to the final play," said Rockford coach Ralph Munger. "But we need that effort from everybody on the team in order to beat a team as talented as East Kentwood. When you have the athletes and talent they possess you can overcome a few mistakes, but we just aren't at that level yet."

East Kentwood scored first just over a minute into the game on the strength of a big play offense that repeatedly gouged the Ram defense over the course of the contest. That opening drive featured plays of 40 and 42 yards before the eight-yard scoring play gave EK a quick 7-0 lead. But, the Rams had a quick retort to knot things up at 7-7. The common theme for the Rams all night long was powerful runs from junior fullback Jaiden Friesen interspersed with occasional strong runs from Jack Richardson and Connor White. As was the case with the last Ram touchdown, the scoring play actually came through the air. Corey faked a handoff before dropping back and firing a deep pass to Eli Haddad that he gathered in while in a full sprint at the 5:48 mark of the opening quarter for a 46-yard TD pass. Teagen Lenderink booted through the first of his two PATs to even the score.

East Kentwood made a few other forays deep into Rockford territory in an effort to take a lead into the half, but they only succeeded once in those three thrusts. The first drive ended when Alex Miller picked off an errant pass in the Rockford end zone to stop one drive. The second reached the end zone on another 40-yard jaunt to make it 14-7 East Kentwood. And the third came to a halt at the Rockford 7 when Austin Klein recovered a fumble just before the halftime horn.

The game featured only three punts over the game's duration as both teams put together drives that failed eventually due to either turnovers or turning the ball over on downs. Rockford actually cut the lead to 14-10 on the opening drive of the second half when Lenderink drilled a 43-yard field goal in difficult conditions. The drive ate up over seven minutes and was succeeded by the turnover on downs from the Falcons on the final play of the third quarter.

Now, the waiting game begins as Rockford awaits their fate for a potential post-season berth. One thing is for sure, however, and that is if they do get a berth they will be on the road due to their 5-4 record.