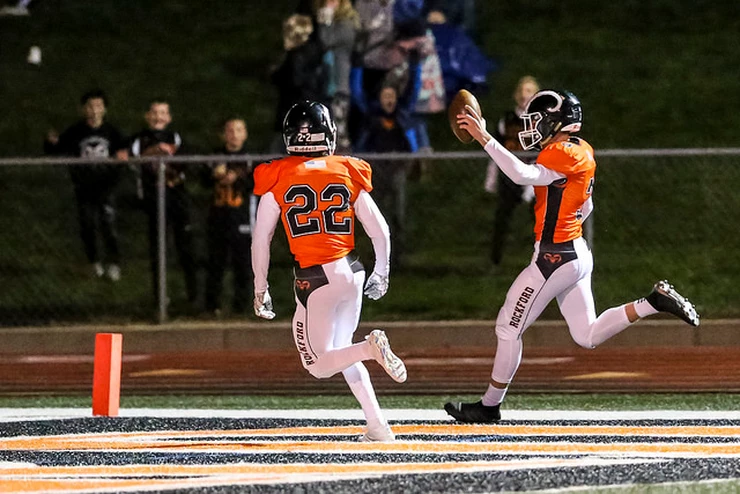 Several weeks ago, Rockford football fans could have been forgiven for thinking this was going to be one of those seasons where nothing clicked as the Rams fell to 1-3 following yet another lackluster outing. But, a convincing 42-20 triumph over Grandville at home, Friday, Oct. 12, saw the Ram winning streak stretch to four games and left a sizable Homecoming crowd convinced that the first part of the season may have been a fluke.

Entering the game both teams were in desperate need of a win in order to advance their potential berths in the MHSAA playoffs. But when two fairly evenly matched teams meet on the gridiron turnovers can often play a crucial part in determining the winner. And late first half and early second half turnovers from the Bulldogs helped turn a 7-7 game into a 21-7 Rockford lead that continued to grow larger as the game progressed.

"For being a Homecoming game and abundant distractions at every turn, I am extremely proud of the focus and effort of our team from the start of tonight's game," said Rockford coach Ralph Munger. "I am so thrilled with how hard the kids played tonight and of how accepting they have been of the coaching staff's instructions. I am just proud to be a Rockford Ram tonight." 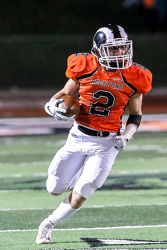 Rockford got the scoring started in the contest as Munger reached into his bag of tricks for a rare gadget play. Facing a third down and eight at the Grandville 26 early in the first quarter, the Rams appeared to be running a sweep right as the ball was pitched to Jack Richardson. Richardson promptly pulled up and tossed a halfback pass to a wide-open Nate Bareno that he hauled in while in full stride for a touchdown with 7:12 left in the opening period. Teagen Lenderink added the first of his six consecutive extra points and it was a 7-0 game.

"We were playing to win the game and sometimes you just have to add a little spice to liven things up," quipped Munger.

But, the lead would not last long as the Bulldogs took exactly two plays to knot things up. On a second-down-and-three play from their own 27, one of the three Grandville backs burst right up the gut for an untouched jaunt into the Rockford end zone to knot things up at 7-7 with 6:49 left in the opening 12 minutes.

The teams then traded punts back and forth for the next several possessions before Rockford got their first break of the game. A Richardson punt was muffed by Grandville and recovered by Rockford at the Bulldog 19 with less than three minutes remaining in the first half. It appeared as if the Rams may be forced to settle for a field goal attempt, but a brilliant diving catch by Cade Klimczak of a nine-yard pass from Chris Corey, gave the Rams a first-and-goal at the Grandville four-yard line. Jaiden Friesen did the honors with a one-yard burst with 28.2 to play in the opening half and the Rams took momentum and a 14-7 lead into the locker room.

The second half began with a bang for the Rams. Lenderink boomed the ball down inside the Bulldog five before the return man started back up the field. He was met with a big hit from two Rams at the 20 when the ball squirted from his grasp directly into the hands of Lenderink at the 28. Defying the normal expectation of a kicker suddenly thrust into the role of ball carrier, Lenderink burst into gear and sped around the right side into the end zone and just 12 seconds into the third quarter it was a 21-7 Rockford lead.

Rockford forced a Grandville punt and quickly cashed in to increase their lead. This time the key play came when Drew Bareno was under a heavy rush while rolling to his left to pass. Bareno threw off his back foot into the only place he could throw the ball - down the left sideline. Tight end Maverick Pant dove for the ball and caught it just above the turf while sliding out of bounds to finish a 21-yard pass to the Bulldog seven. Richardson ran it in off the left side on the next play for the score to make it 28-7 with 8:04 still to play in quarter number three.

The Bulldogs kept grinding to try and stay in the game to their credit and actually cut the lead to 28-14 on a beautifully conceived trick play to give their fans a ray of hope with 4:59 still to play still in the third stanza. 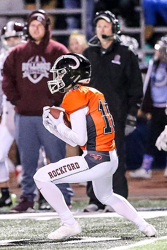 The Ram offense was running on all eight cylinders by this time and wasted little time stretching the lead back out to three touchdowns. Marching 66 yards in seven plays the Rams used both the pass and run to reach pay dirt. The highlight of this drive was a bruising 40-yard burst from powerful junior fullback Friesen. Keeping his legs churning while breaking multiple tackles Friesen burst into the open field before finally being run down on the Bulldog 10. Drew Bareno and Pant hooked up again for the eventual touchdown to push the score to 35-14 with still 55.9 left in the quarter.

Sophomore fullback Jacob Vega did his best Friesen impression on the final score of the night for the Rams when he absolutely willed his way into the end zone for a 10-yard TD run to make it a 42-14 Ram lead with 5:24 left in the game. Grandville added a meaningless score late to make it 42-20 and that was how it ended.

"This was the biggest game of the year for us so far," said Munger. "And next week is even more important now. I want to close by making sure that we give a great amount of credit to Randy VanderVeen and his defensive staff tonight. Grandville has a potent offense and we kept them in check for almost the entire game."

The Rams now sit at 5-3 on the season and 4-1 in the OK Red. The win now sets the stage for a showdown for conference supremacy next week when the Rams travel to East Kentwood. The Falcons lost their opening game to Muskegon Mona Shores but have been on an absolute roll for the next seven weeks. They will enter the fray with an overall mark of 7-1 and stand at 5-0 in conference play. If East Kentwood wins they are the solo OK Red champs but have already earned at least a share of the crown. The stakes are even higher for the Rams. A win for Rockford means they will share a piece of the crown and guarantee their entry into the playoffs. A loss means they have to sweat it out when the playoff pairings are announced while hoping they have enough points to squeak their way in. 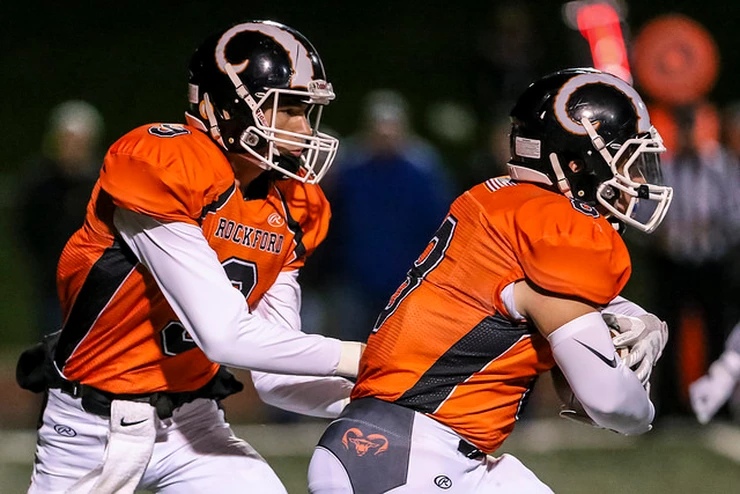 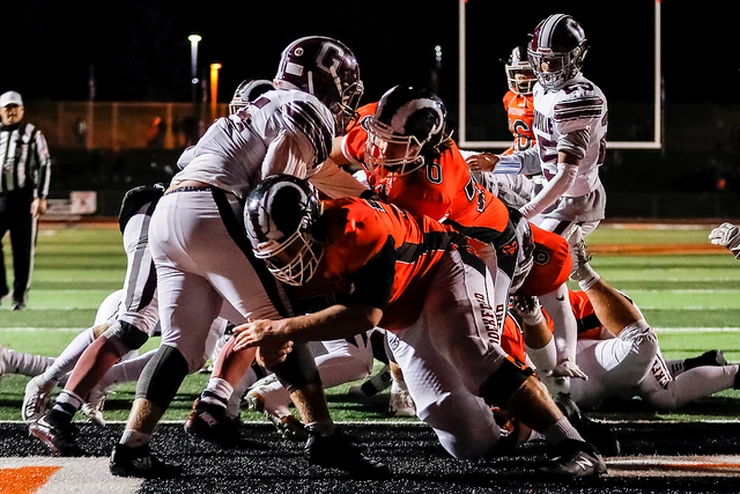