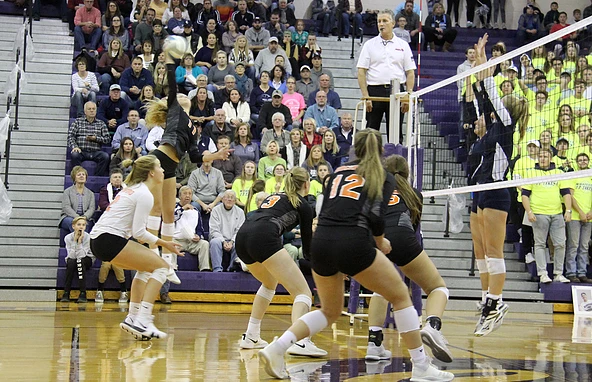 Ram Alyssa Judge goes up for a kill in the MHSAA DI Quarterfinals against Gull Lake. ~ Photo by Jeannie Gregory

CALEDONIA – The Rockford varsity volleyball team entered the first game of the Michigan High School Athletic Association (MHSAA) DI State Quarterfinals like a team on a mission and continued overpowering their opponent throughout the match. The Rams smashed, bumped, dug, aced - and even used some finesse - to top the Gull Lake Blue Devils in three straight sets Tuesday, Nov. 13, to earn their way into the MHSAA Semis. Rockford made quick work of downing the Blue Devils, taking only an hour to claim the victory by scores of 25-14, 25-18, and 25-15. The wins move the team’s overall record to 46-11-1 on the season.

The first set prepared the stage for the whole match. Rockford came out on fire, earning a 7-4 lead behind the serves of Madelyn Long, and impressive kills by middle Emmy Webb, with Webb slamming down four consecutive Rockford kills to spark the Rams. Gull Lake coach Eric Belz called a timeout to try and stall the momentum, but Webb and Claire Phillips combined with a block at the net to move the score to 8-4. Gull Lake was able to string together a bit of a game, pulling to within one point at 8-7, but a kill by Lindsay Taylor pulled the momentum back to the Rams. The Rams then strung together five consecutive points with Webb at the serving line and Taylor smashing and tipping for kills. Belz again called a timeout with the score 13-7, but this time the Rams were having none of it. Gull Lake was able to take back one point, but the Rams answered rattling off another three points, with one coming from an ace from Alyssa Judge. Gull Lake mustered another point, but Taylor slammed the door with a monster kill that brought the serve back to the Rams, with Annie McIntosh standing at the line, earning an ace and the Rams taking a 19-9 lead. A kill by Megan Witte, an ace by Long, and some miscues by Gull Lake moved the score to 23-14. A kill by Webb earned the Rams a 24-14 lead and Gull Lake failed at a line attempt to drop the first game 25-14.

The final two sets were more of the same with Rockford dominating in all areas of the game. Gull Lake did a better job of staying in the second set, knotting the Rams at 12, and just trailing by one at 17-16, but Rockford let them know it wasn’t going to last. Taylor knocked down three kills, Webb chipped in one, and aces by Judge and Emilee Karelse helped the Rams run away at the end. The combo block at the net by Webb and Witte earned the final point, with the Rams earning the set 25-18.

The third set was all Rams, as they screamed to a 14-7 lead. Another Gull Lake timeout didn’t have much of an effect, as Long dug up just about everything, and Emilee Karelse put up perfect assists so Webb and Taylor could put on a clinic at the net. Judge used some sleight-of-hand to maneuver the ball over the net to put an exclamation point on Rockford’s skill on the court. The Rams rolled to an easy 25-15 victory in the final stanza to claim the match 3-0.

“We got out to a fast start against them,” said Ram head coach Kelly Delacher. “Madelyn Long served very well tonight and she executed a nearly perfect game plan defensively. She played one of her best matches of the season. Gull Lake had a tough time hanging with our middles who combined for 17 kills and a .615 hitting efficiency, and Lindsay Taylor dominated offensively with 22 kills and .588 hitting efficiency.

“It was a great performance,” continued Delacher. “We are firing on all cylinders offensively and we defended Gull Lake as well as we could.”

The Rams now face Northville in the state semi-finals at 6:30 p.m., Friday, Nov. 16 at Kellogg Arena, in Battle Creek. The early game is Lake Orion against Farmington Hills Mercy, who play at 4:30 p.m. 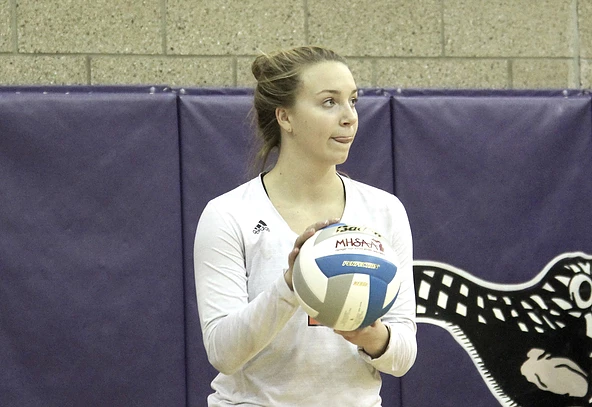 Madelyn Long had four aces at the serving line against Gull Lake. 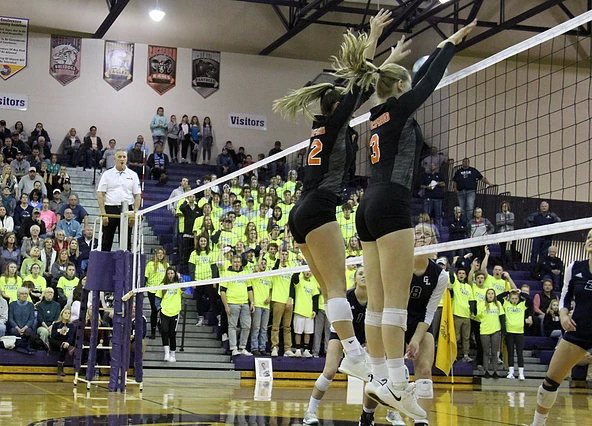 Emmy Webb and Claire Phillips go up in tandem to block a ball. 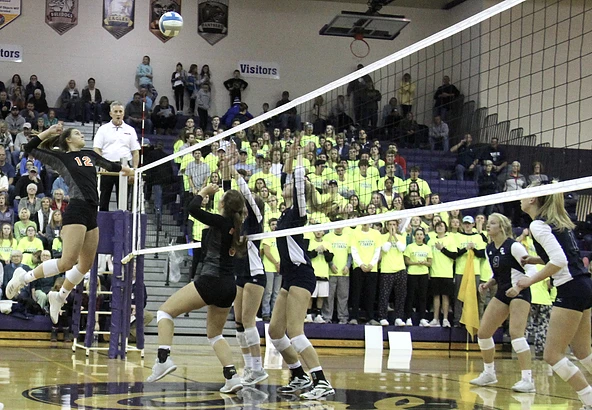 Emmy Webb prepares to slam one down in the MHSAA Quarterfinals.