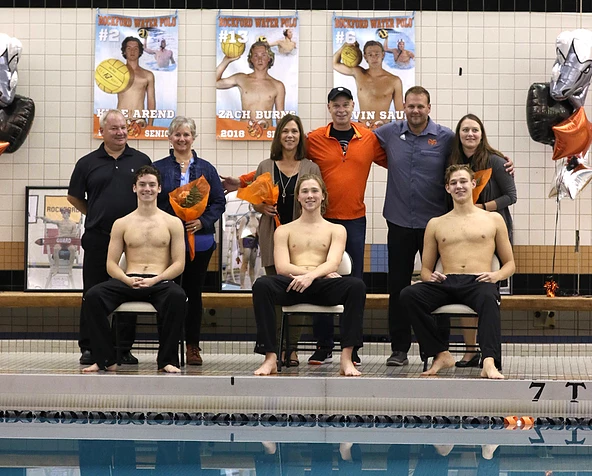 ROCKFORD – The varsity water polo team paid tribute to their seniors in a huge way, Monday, Oct. 8. It was a match-up of the state’s No. 1 and No. 2 ranked teams, another preview of things to come. After falling to the No. 1 Eagles four times in the season, Rockford claimed a sweet 14-11 victory at the Rockford Natatorium in front of a boisterous crowd of Ram fans. The win moves Rockford’s record to 26-5 on the season.

“We have been working all season on a few different offensive and defensive looks,” said Ram head coach Jon Haga. “It is finally starting to click. This was a big win for us mentally. Our seniors are our leaders in and out of the pool and they showed that tonight. Now we know we can beat any team in the state.”

Both teams started out strong, letting the crowd know it was going to be another battle to the end. Both Hudsonville and Rockford scored four goals in the first quarter, with Rockford’s Kyle Arend, Elijah Chino, Gavin Saur and Zach Burns finding the back of the net. At the end of the second quarter, Rockford had a slight one-point edge, 7-6. Arend and Burns scored again, with Hudson VerWys adding a goal for the Ram cause.

A stalwart Ram defense kept Eagle scoring at bay, holding Hudsonville to only two goals, while lengthening the lead to two points with a 10-8 score at the end of the third quarter. Arend was on fire again, tallying two goals, with Gavin Saur netting one. The Eagles were able to score three goals in the fourth stanza, but the Rams answered with four of their own to claim the 14-11 victory. Burns slammed the ball home three times in the fourth to give no doubt as to the eventual outcome, and Chino added one for insurance.

“We need to come into practice day in and day out ready to do just that as we head to the post season,” concluded Haga. “I think we are in a good position to make a run at this thing. It is going to be an exciting couple of weeks. Beating Hudsonville at home, on Senior Night, is great. It locked up the OK regular season conference. But, if we want to go into the state tournament as a top seed, we have to beat them at their home pool. We are in a good spot. We’ve got to keep pushing.”