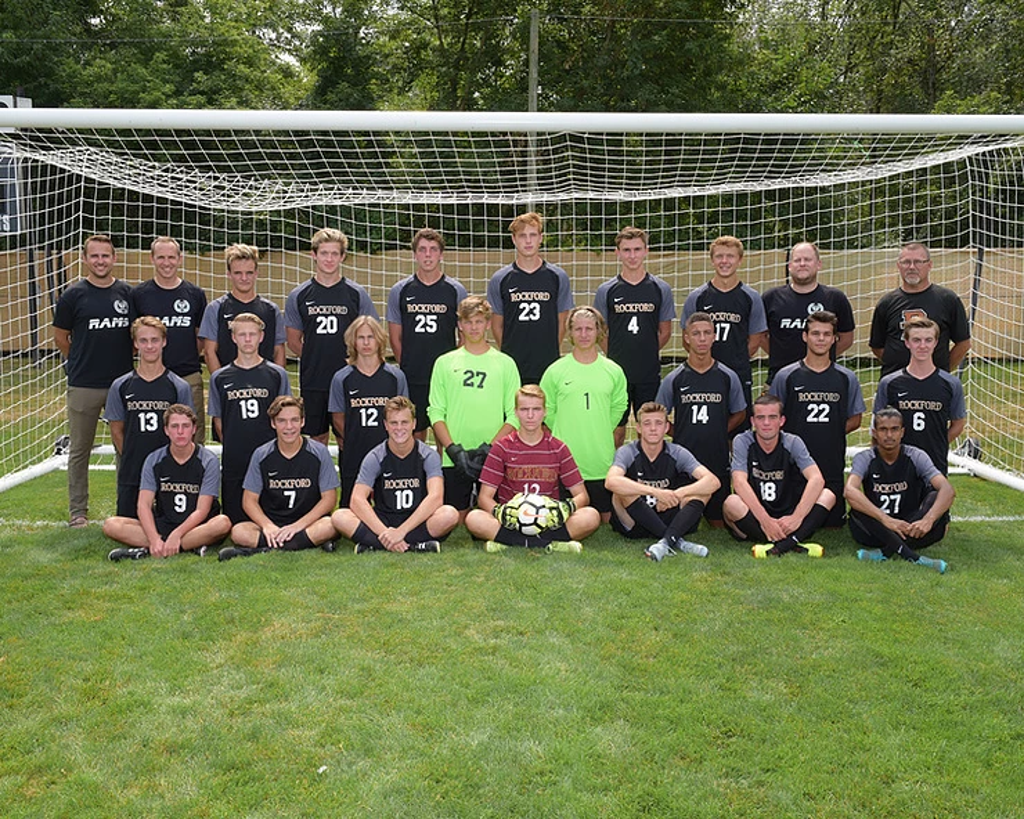 The Rockford soccer team faced the season with plenty of youth, with eight new players joining its roster. The team ended it with plenty of growth and positive experiences, and a 7-2-3 record.

Head coach Stu Quackenbush’s team faced a couple of heartbreaks at the end of the season, with a key away game against Caledonia affecting whether or not the Rams would be able to claim the OK Red Crown. Rockford had topped an undefeated Caledonia team on Youth Night 2-1 earlier in the season. If the Rams were able to top the Fighting Scots in their final regular season match-up, they’d claim the conference title, if they lost it was Caledonia’s. There was another outcome that would affect the finish – a tie. And that’s exactly what the teams did. Caledonia was up 1-0 at the half, and the Rams came back to tie it 1-1, but weren’t able to connect with the back of the net again.

“We tied the game in the second half,” said Quackenbush. “We had plenty of opportunities in the second half to put the game away, but we lost those opportunities. We had the last chance, but we didn’t quite get there. Their team scored a goal on a brilliant bicycle kick – you just don’t see that a lot in a high school game. I have to give it to them, though, defensively they played fantastic. Our back line played really well, Caledonia has some of the best attackers in the state and we kept them away from the net.”

The Rams then entered district play and fell in another extremely close match, ending on the wrong end of a 1-0 score against an 11-7-1 Forest Hills Central team.

“It was really a hard way to end the season, because we kept improving as the season moved on,” said Quackenbush. “It was fun to practice, fun to play, and even more fun to see them improve. We always asked two things from the team, to always put the needs of the team before your own and to be ready to go and ready to train – to come together and work hard. They did both of those things.”

The team handed out awards for the season, with the players voting on who was deserving of the honors.

“Aaron was our starting goalie the final 1/3 of the year, and a fantastic athlete,” said Quackenbush.  “We thought it was the best move for the team, as a whole, at the end of season to put him back in the frame. The first 2/3 of the season we had junior Jack Hansen in goal. He is ‘lights out’ good, believe me, we wouldn’t have kept the experiment going on if he wasn’t so good. He is one of the best goalies in the area, and has tons of potential. He will be back next year for the team.”

Senior captain Trevor Durfee also earned MVP honors from his teammates. According to Quackenbush, he was Rockford’s leading goal scorer, and the centerpiece of the Ram offense.

“Sayvion is a junior captain and that tells you a lot about his skill as a leader,” shared Quackenbush. “It’s special to be a junior captain. His teammates picked him because he has tons of talent, is fast and physical and has an extra gear for working hard and getting things done.”

The Most Improved award went to junior Kyle Switzer.

“He came in to play for varsity and he was relatively unknown,” said Quackenbush. “His work rate gave him an automatic edge over his teammates. Eventually his teammates picked it up and followed his lead. He scored important goals at the top, and we also moved him back to defend some of the best area players. There were a lot of improved  players this year, there were four or five other guys worthy of consideration, as well.”

The Leadership Award is awarded to the player who shows, passion, humility, hard work and respect. Ram Connor Garnsay was honored with the award.

“He is the most ‘team first’ oriented player I’ve ever coached,” said Quackenbush. “He was always the player that would do what others didn’t want to do – move equipment, get things ready. He is a special kind of leader, always full of encouragement for his teammates.”

Quackenbush looks back over the season with great fondness.

“There’s a lot of amazing things I could say about this group of athletes,” concluded Quackenbush. “This was a really good group of kids, with high character. They came together as a team in the best sense of the word.”